CSC week continued into Holland today when their Luxembourg road champ Frank Schleck pounced from the lead group just inside the final 10km and opened the gap that closed the door on the rest of a star-studded lead group.

It’s that time of year when double and triple wins have become the norm, and CSC picked up where Tom Boonen, Danilo Diluca, and Davide Rebellin left off last week and in the last years respectively, adding the Amstel Gold Race 2006 to Fabian Cancellara’s Roubaix win last week. 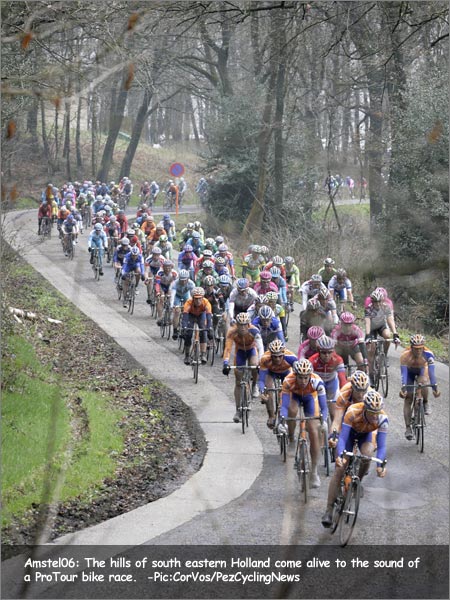 Winner Frank Schleck was beaming on the podium as he called CSC the: “Best team in the world and I’m proud to be in it”.

The defining elements of the Amstel Gold parcours are the many hills that always set up a win for the man with the best form – no pretenders here. 31 times up and down some of the steepest ‘bergs in bike racing (we’re talking up to 22% grades here) weed out the opportunists and leave only the cream to fight out the win.
At 253km long, the race is just too hard to see much action early on, and it wasn’t until the final 40km that things really shaped up. T-Mobile’s 2004 Flanders champ Steffen Wesemann looked super strong, driving the bunch and finally taking off on his own in what seemed like a bid too early. 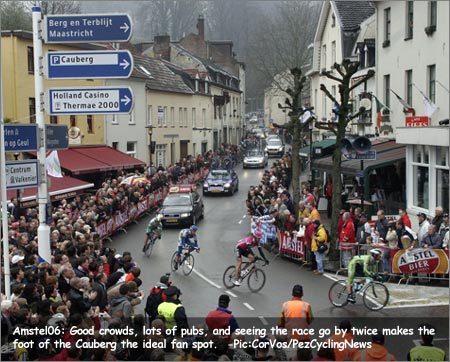 He dangled out alone with a slim lead hovering between 15-45 seconds until 15km to go, when he was joined by Il Grillo himself – Olympic champ and ever present Classics threat Paulo Bettini. Always a fighter, the small man with the golden helmet launched more attacks than anyone, and certainly looked like the strong man of the race, but only managed to burn his matches in what turned out to be a pointless display. He’s a smart rider who knows how to win, so when these two hooked up, there was reasonable thought they could carry on to the end together.

But with a Wese’s T-Mobile team mate Serqei Ivanov not far behind, Steffen wisely sat in to allow the joining of a small group that also contained Gerolsteiner’s Fabian Wegmann, and CSC’s Frank Schleck.

By now the hills had taken their toll, and over the 22% Keutenberg at 11km to go, the final lead group of about 9 riders took shape. Bettini, Wesemann, Ivanov, mutil-Amstel winner and hometown fave Michael Boogerd, former Tour of Germany winner Patrick Sinkewitz, and 2004 Ardennes week hat-trick winner David Rebellin were all there setting up a barn-burning bust-up over the final 3 climbs. 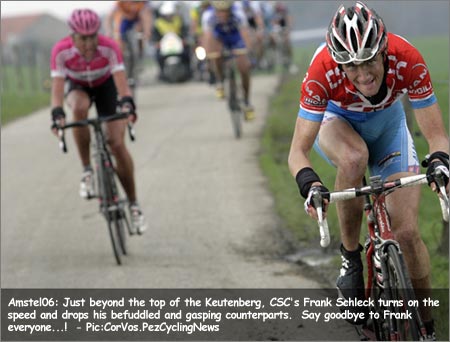 Sneaky Schleck
But with just 9km to go, and surprising us fans and his rivals alike, CSC’s Frank Schleck laid down a triple-A top fueler acceleration that left the rest looking on helplessly as the Luxembourg champ stormed off alone. For sure they expected it was too early for a move like this to stick – especially with a few more flat kms and the final1km grunt to the finish looming.

For his part, Wesemann saw the writing on the wall and soon took off in hot – albeit lonely – pursuit, while the rest of the chasers did not, or could not react. 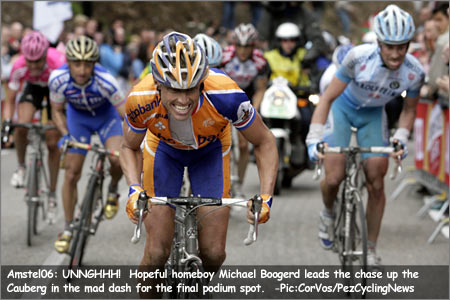 The final minutes and kms ticked by at max HR and by the bottom of the Cauberg climb to the finish, it was clear Schleck was about to join the history books and add another notch to his own – and Bjarne Riis’s CSC team palmares.

Once again Cycling.tv provided excellent live coverage for fans in North America, and our own James Hewitt was back in studio offering up his ever-insightful pre- and post-race commentary. 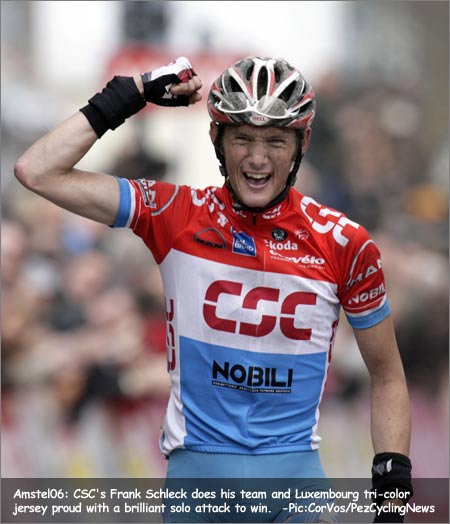 Tune in for Cycling.tv for Fleche-Wallon on Wednesday, and Liege-Bastogne-Liege next Sunday.

The MAGNUS Diary: From the Bench