Amstel Gold 2006: Out With The Pave, Into The Hills

In one quick week, the Spring Classics go from tough, cobbled, hellish tests of strength to tough, hellish tests of strength…without the cobbles. The racing heads to the hills for the next week, first into the Limburg region of Holland for the Amstel Gold Race, and then it’s to the Ardennes. PEZ takes a look at the tough course and riders that will leave their mark on Holland’s only Classic.

The Amstel Gold Race now occupies a commanding spot in the Spring Classics, as it is now the transition point into the hilly Classics week. It is the opening race of the three races, which make the punchy climbers eyes go agoggle – first Amstel on Sunday, then it’s into the Ardennes for Fleche Wallonne on Wednesday, and La Doyenne – Liege-Bastogne-Liege next Sunday.

A parcours made in Heaven for the adventurous tifosi – you could probably watch the race 87 different times and never drive more than 10k.

Are They Really All That Different?
Amstel Gold has a parcours in some ways that resembles the Tour of Flanders – before you go crying blasphemy hear me out. Both center the business end of their races in a very small area with a LOT of hills – the Tour of Flanders does a long, windy intro before driving mercilessly into a very specific part of Flanders where climbs abound and the race loops all over the place to gobble up every climb possible.

Hills, Hills, And More Hills
The Amstel Gold Race does basically the same thing without the flat intro – the hills start almost immediately as the race leaves Maastricht and heads directly into the hills of the Limburg region in the southernmost tip of Holland, which is sandwiched between Germany and Belgium on either side. The race course loops back and around over and under to find every hill imaginable in an incredibly tiny area. 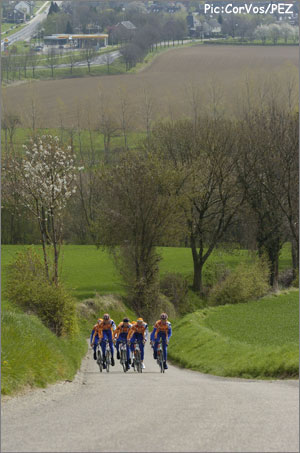 Koppenberg eat your heart out.

Short And Steep…And Lots Of Em
The climbs? Apart from the cobbles, they’re similar – short, steep, hard – a little longer and numbering more than the Flanders climbs and obviously ridden differently since there aren’t those pesky stones thrown all over the ‘road’ willy-nilly. Well, ok, that makes for a rather large difference between the two. 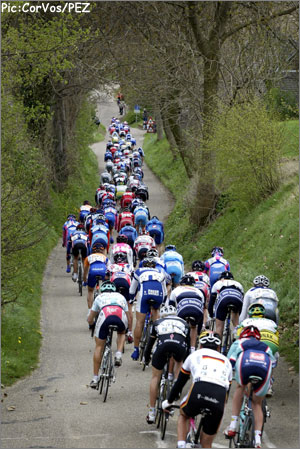 The narrow farm roads of Limburg make for some fun racing.

The roads? Narrow and twisty, just as in Flanders. Positioning is paramount in the race, as splits will inevitably occur over the umpteen climbs, and who really wants to stop, unclip, and wait for their turn to participate in the climbing of a hellishly steep berg from a starting speed of…0? 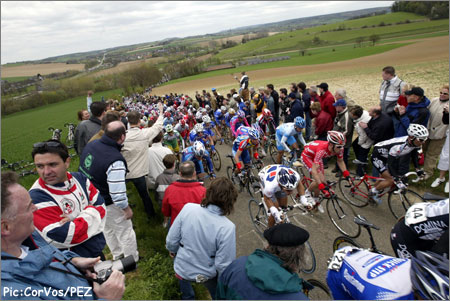 The fans in Holland make sure to make a tunnel of noise for the riders as they struggle upward.

The countryside? Wide open with some trees here and there, just as in Flanders. Nothing like a little crosswind over the top of a 22% climb to make life easy, right? 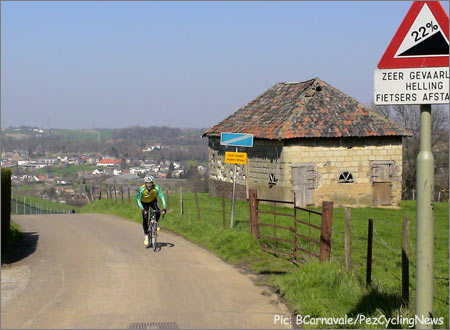 They go down that in the race, right?

The point is – if the early Classics riders weren’t all so cracked right now, riders like Tom Boonen, Peter Van Petegem, Leif Hoste, et al. could very well win a race like Amstel Gold. Peter Van Petegem has done very well at Amstel Gold in the past, but he would probably be the first one to admit that he participated on the tail-end of his Springtime form. There will not be a PVP in attendance this year though, as he broke his collarbone at today’s Scheldeprijs.

There will also be two other riders that will raise eyebrows with their absence: last year’s winner Danilo Di Luca – he has only the Giro in focus at the moment, no time for Amstel; and winner from three years back, Alexandre Vinokourov. 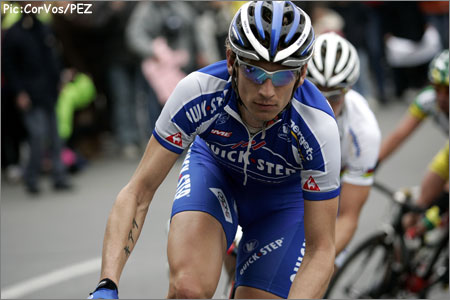 Ice cold Pippo Pozzato could very well be a man to be reckoned with on Sunday.

Riders Still Carrying Form
With that said – there are a number of riders that have been going strong all through the Spring Classics and have to be looked at as favorites when the race finishes on the Cauberg Sunday afternoon. Filippo Pozzato has been on splendid form since the season started – taking the win at Milano-Sanremo and then helping Boonen to his win at Flanders and then doing Paris-Roubaix as well. 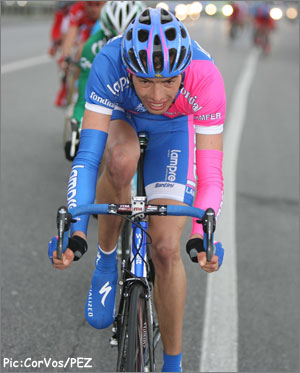 Alessandro Ballan hasn’t seemed to have lost one bit of his form – he is definitely one to watch in the finale.

Alessandro Ballan has been the true break-out success of the Spring season – he has been there in all of the big time One-Day ProTour events so far this year – Milano-Sanremo, Flanders, Roubaix – and he still shows no real signs of letting up. He showed with his win at Laigueglia earlier this year that he can go uphill REALLY fast as well. 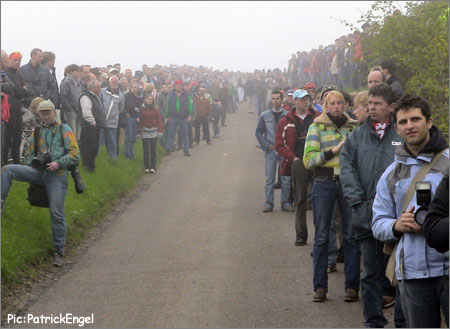 The Fresh Batch Contenders
Other than a select few though, a different set of riders will be coming to the fore: the Grand Tour riders as well as the punchy climbers for the Ardennes Classics – they make up the favorites list for the most part – they’re all either coming into form for THEIR week in the sun (or rain, whatever) or looking for a big time test to see where they’re at in terms of form before their Grand Tour of choice, as Lance Armstrong used to do. Right now, the Giro D’Italia looms very large – only two weeks away from its start in Belgium, so there will be a number of hot favorites for the Giro testing their form in the next week – not so many at Amstel, but nearly all at Fleche and LBL. 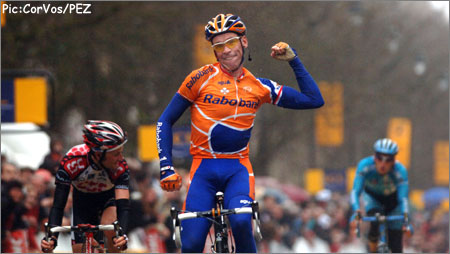 Erik Dekker will be one of the leaders in the Rabobank juggernaut on Sunday.

One Team Has A Very Big Burden
The Amstel Gold Race is Holland’s only big One-Day Classic, and because of that, there is a huge pressure on Holland’s biggest and best team, Rabobank, to take the win. If there is any team that appears to have a REALLY good chance at the win, it’s Rabobank. Just as Quick.Step has seemingly infinite options in some races, the same goes for Rabobank at Amstel. They have former winners in Erik Dekker and Michael Boogerd (who also has more podiums than he’d care to admit) – both have been on solid form this Spring and could easily take the win. 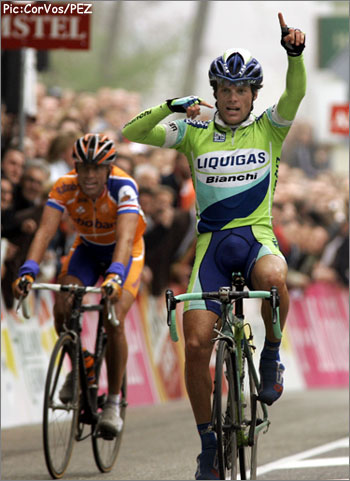 Lookie there, it’s Boogie in 2nd…again.

Boogerd must be feeling some mean pressure after the near misses that have befallen him in all of the Hilly Classics in recent years. He always seems to fall victim to a rider on the form of his life – last year it was Di Luca, two years ago it was Rebellin. Perhaps he’s still paying his karma dues for sitting on Armstrong’s wheel in 1999 for the final hour of the race, never once pulling through, and then beating him on the line. 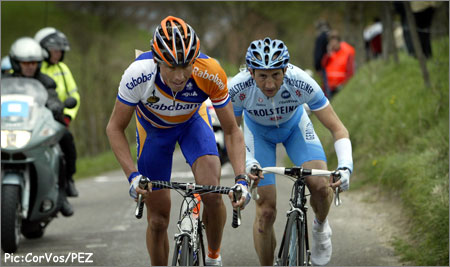 If it’s not Boogerd or Dekker, there’s still plenty more on offer from Rabobank, notably from Dekker the Younger, Thomas Dekker – winner at Tirreno-Adriatico, but perhaps owner of some suspect form after being dusted at the Vuelta al Pais Vasco. 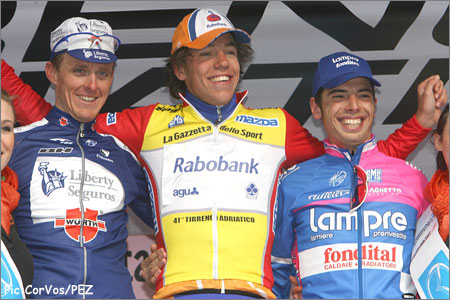 Thomas Dekker will take a big Classic at some point, he’ll probably win everything at some point. Note his podium companion: Alessandro Ballan.

Juan Antonio Flecha is going strong and could definitely play a part, but the other big favorite card has to go to the rejuvenated Oscar Freire who has returned to the big time in a huge way in 2006 – taking wins at Tirreno-Adriatico, Brabantse Pijl, and recently at the Vuelta al Pais Vasco. 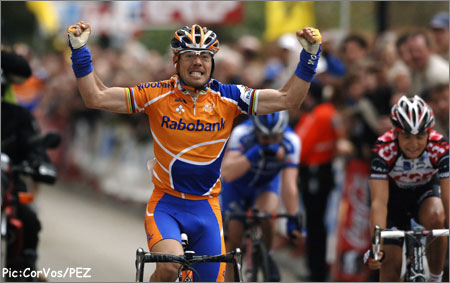 Rabobank Will Have Their Hands Full
The man that would seem to be a shoo-in for a win here has to be Paolo Bettini. The race caters to his style of aggressive riding over a very tough course, and yet, he has never come too incredibly close to winning here…yet. The same was said about Il Grillo when it came to Lombardia, until he won it last October. Bettini has been quiet over the past few weeks – it seems high time for Bettini to give it a go for the Hilly Triple that Rebellin pulled off two years ago. Bettini could form a nasty duo with Pozzato. 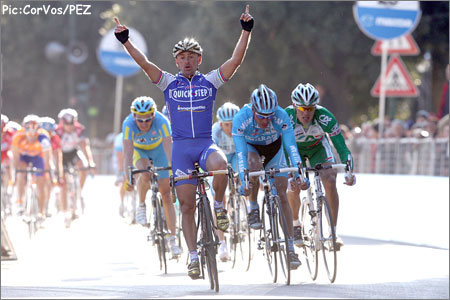 So Many Possibilities
The list of other contenders is very long, as this will be the first race to see how the new ‘contenders’ are doing. After Amstel, the favorites list should shorten considerably for the Ardennes Classics. Gerolsteiner has an excellent squad coming in that could make something special happen, notably in Davide Rebellin, who won here two years ago, but also on-form riders Stefan Schumacher and Fabian Wegmann. Schumacher has an excellent sprint and seems to get over hills very ably. He also carries that fateful year of birth: 1981. Unfortunately for Gerolsteiner, Davide Rebellin, was found to have broken a rib at Pais Vasco last week – Rebellix still plans on starting and contending, but his chances for victory probably just fell through the floor. 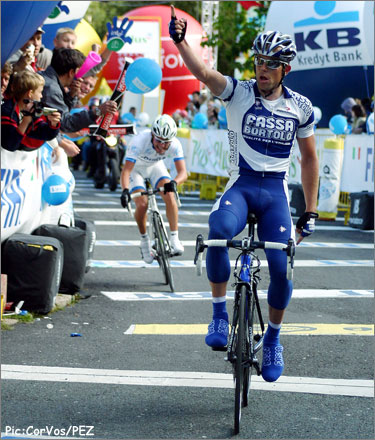 Kim Kirchen will be looking for success this year in magenta colors.

Germany’s big bad team…T-Mobile, which has endured a very inauspicious start looks to have some serious contenders for the next week. Kim Kirchen is always a contender in these races, but has yet to score big – he should be a good bet for Amstel. Patrik Sinkewitz is going very well at the moment and should find his way into the Top 10, not to mention Matthias Kessler and former podium finisher at Amstel, Sergei Ivanov. T-Mobile should have a very solid team. 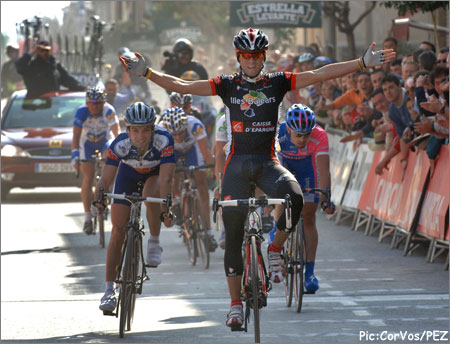 Alejandro Valverde is coming on strong at the moment after an excellent campaign at Pais Vasco last week where he ended up 2nd overall with a stage win to boot – his finishing kick, especially uphill, is notoriously ferocious, and it seems due time for Valverde to cash in on a Classics victory. 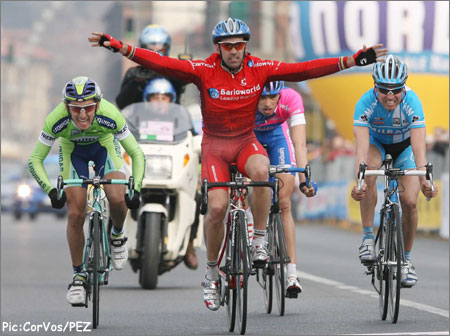 Igor Astarloa has had a redemptive Spring of sorts after a nightmare over the last two years. This is his favorite week of the year, and the former winner at Fleche Wallonne should find the parcours of Amstel Gold much to his liking. 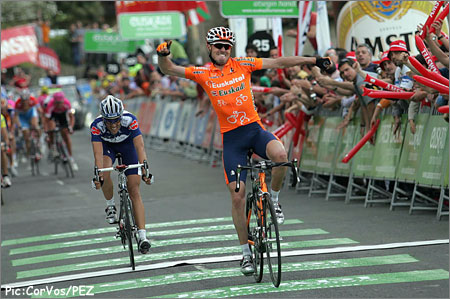 Euskaltel’s Sammy Sanchez had an incredible Pais Vasco, except for his miserable time trial. He’s on great form and is mighty quick in an uphill gallop. Sanchez has already singlehandedly helped Euskaltel out of an atrocious start to the season – perhaps he can make it a great early seasn for the Basque Boys with a win either atop the Cauberg or next week in the Ardennes. 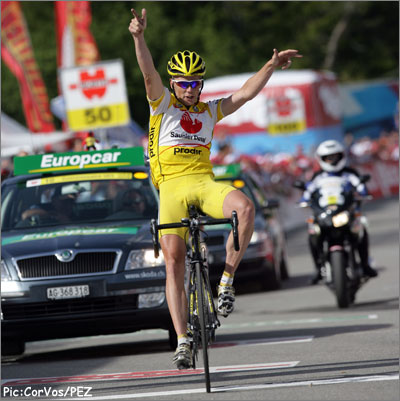 Chris Horner is a man for these races…a win at Amstel would be a huge coup.

Longshots
Chris Horner has ridden to some consistent, quality finishes so far this season, and with the absence of PVP on Sunday, he could very well get the chance to play his own cards. Stefano Garzelli will be leading the Liquigas charge – he’s a very capable rider in the hilly Classics. And hell, why not, what about Frank Vandenbroucke? He has 200 to 1 odds on Unibet, that would be a fun bet.