Australia’s Robbie McEwen added yet another title to his credits when he secured the National Criterium Championship in Brisbane, Australia Sunday in a thrilling finish out sprinting rivals Allan Davis (Astana) and dual Olympic gold medallist Graeme Brown (Rabobank). 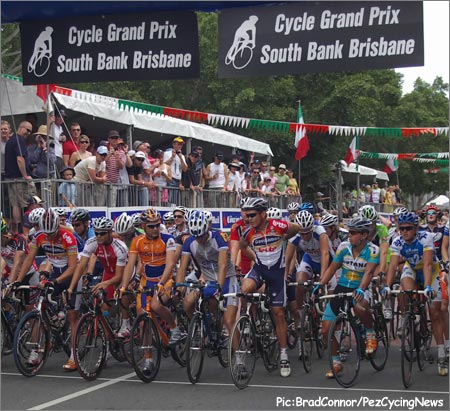 The startline at any off-season race in Australia always turns up a huge number of pros.

In one of the best fields ever assembled in the country, sixty top level riders battled it out in mid 30degree Celsius temperatures around a tight street circuit for the title of Australian Criterium Champion. Favorites for the race were last week’s Darren Smith Memorial, victor Jason Phillips (2XU Clothing), Allan Davis (Astana), Robbie McEwen (Davitamon-Lotto) and Graeme Brown (Rabobank). 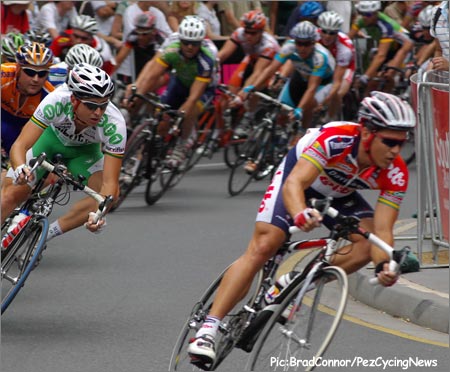 Robbie McEwen was never far from scoring another national jersey – should look smart with the new Predictor ‘salmon pink’ kit….

Defending champion Richard England (Priority Health) was racing too, but could he hold off the speed of three top ProTour sprinters like Davis, McEwen and Brown to retain his national champion’s jersey? This same question was being asked by most of the other 50 riders in the peloton – how DO you beat the three super sprinters? Attack, attack and attack some more was the answer of course and it was Jason Phillips and Matt Wilson (Unibet) who were amongst the early challengers but despite many attempts, no breaks were able to stay away.

In the 1hour plus 3 laps race it wasn’t until the 25min to go mark when the first serious break was away with Jason Phillips (2XU Clothing), Trent Wilson (Jittery Joes), local rider Tony Mann, Allan Davis (Astana) and Graeme Brown (Rabobank) building up a lead of 17 seconds. Many in the crowd thought that it was the winning break – as did the man in the move, Allan Davis, “I was giving it a fair bit of stick in the break cause I thought it was going to stay away and I ended up wasting just a bit too much energy.”

Graeme Brown check the progress of the break.

Unfortunately for Davis he didn’t have any team mates in the race that could help him – unlike McEwen who had loyal Davitamon-Lotto man, Nick Gates driving the bunch, along with his mates Simon Gerrans (AG2R) and Matty White (Discovery Channel). The three ProTour domestiques showed a touch of class as they closed down the gap to the breakaway and eventually set McEwen up beautifully for the final sprint. 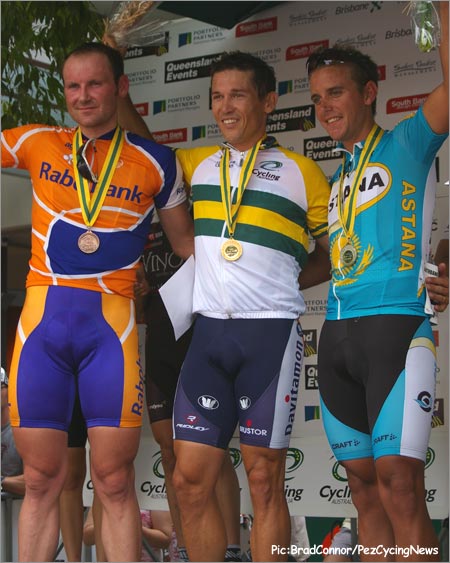 Coming into the finishing straight it was Graeme Brown who started the sprint early and only Davis and McEwen had the kick to stay with him as the rest of the peloton lost the wheels of the three super sprinters. Unfortunately for Brown he just went too early as first Davis, then McEwen came around him. Robbie then hit the front with less than 50metres to go and saluted his home town crowd for yet another great sprint win by the Tour de France green jersey champion.

PEZ Xmas: Stuff You Gotta Have!