The Tour of Britain rolled out of Scotland today on a six day crusade to the gates of London. Joining the charge is Team Denmark’s Michael Morkov – who’s agreed to let PEZ tag along for the ride. Here’s his first report on how the race looked from the saddle…

It was a case of, ‘right country, wrong guy’ in Tuesday’s 162.6 kilometre first stage of the Tour of Britain from Scotland’s largest city, Glasgow to picturesque Castle Douglas to the south.

Denmark triumphed with young, Team CSC professional Martin Pedersen first across the line after the three-man breakaway he was part of was allowed to build a huge lead before the chase started; but too late to stop Pedersen from winning and taking the first leader’s jersey of the race. 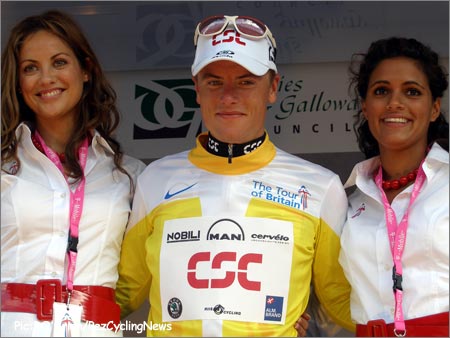 The right guy would have been Copenhagen’s 21 year-old Michael Morkov, who won Monday night’s Glasgow Grand Prix, curtain-raising criterium around the city centre. Michael is the eyes and ears of PEZ in the bunch for the duration of the six stage race which finishes in London on Sunday. 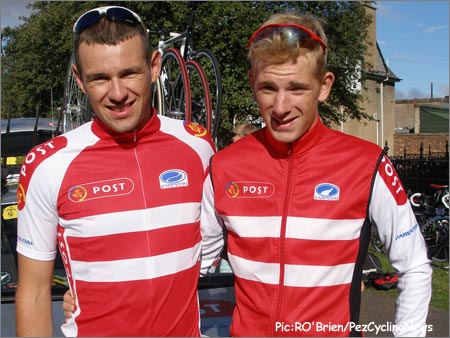 He and Rasmussen made a highly successful six-day debut last winter and already have contracts for the 2006 Maastricht, Amsterdam and Grenoble ‘races to nowhere’.

Pez: How do you see your role in this year’s Tour of Britain?

Michael: I’m here to set-up the bunch sprints for Alex; he’s had a good year on the road winning the Tour de Berlin. 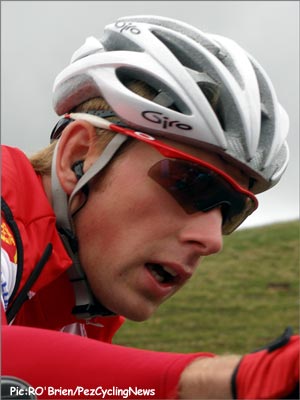 Michael Morkov of Team Denmark will keep PEZ-Fans posted from inside the bunch.

Pez: The break stayed away all day today.

Michael: Yes, there was only one break, they went at around 25 K and the bunch just let them go; for two hours there was no chase. There was a counter-attack of eight riders later-on and the last 60 kilometres were pretty fast, the break still had more than two minutes at the finish though.

Pez: How did you feel today?

Michael: I felt good, I tried to get away early-on, just before the break went. 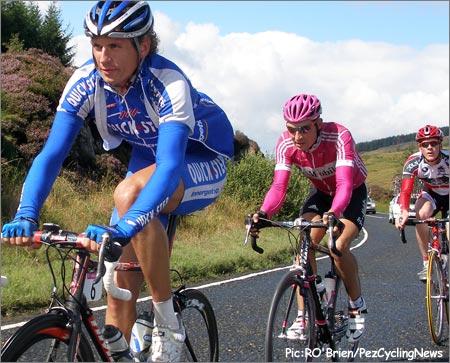 Pozzatto and Pollock chase back thorugh the team cars.

Pez: Do you know Pedersen?

Michael: Yes, he was in my team, GLS last season and I worked in the sprints for him a few times. He is fast, last year he won two stages of The Olympia Tour in Holland.

[Pedersen is also a former winner of the amateur Liege-Bastogne-Liege.]

Pez: How did Alex do in the bunch sprint?

Michael: I couldn’t help him much in the last 500 metres because of the way things worked-out in the finale but he was 6th in the group, 9th on the stage.

Alex Rasmussen working on the road now – for a few nice paydays in the upcoming Six Day season.

Pez: How do you see tomorrow panning-out, will Quickstep go on the offensive?

Michael: For sure, they are the big team in the race and will try to take the time back from Pedersen; today in the crosswind they rode together and you could see how strong they are. I think it will be hard for Quick Step to take the jersey from CSC though – they are a very good team too.

There are three hills early tomorrow so I think it will be a case of surviving those then looking-around and seeing who is still in the group from our team. I think it will still be a bunch sprint, but not a big bunch.

• Wednesday’s second stage takes the riders from the fun-fair-town of Blackpool to the city that gave us The Beatles – Liverpool. There are three big climbs in the first 60 kilometres then another 100 kilometres to the end with the last 30 very flat before a slightly uphill finish. 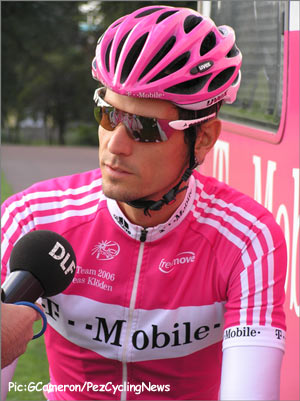 Klodi said ‘auf weidersein’ at the feed – maybe a message to team brass?

Be Your Own Coach: FAQ’s Part I