A race filled with crashes, fast racing and controversy was played out in Surfers Paradise alongside one of Australia’s most famous beaches over the weekend. Rising above the controversy was Davitamon-Lotto’s top domestique, Nick Gates who managed to take the win ahead of Unibet’s Matt Wilson and Baden Cooke.

With a sixty strong line up of talent that included ProTour representation from Astana, Rabobank, AG2R, Discovery Channel and Davitamon-Lotto on an extremely technical circuit with a big wind and large crowds this race was always going to be action packed.

Most of the crowd and commentators alike had picked recently crowned National Criterium Champion, Robbie McEwen as the favorite for the event as he was obviously in hot form after last week and he had the added motivation of this race being a truly ‘local’ one for him. Both Robbie and great mate, Nick Gates live only 10kms down the road from the race circuit so there was plenty of friends and family cheering for the Davitamon-Lotto team. As if the motivation of performing at home wasn’t enough there was also the added motivation of wanting to send team mate Henk Vogels out on a good note in what was to be Vogel’s last race in the Davitamon-Lotto kit before heading to America next year with Toyota.

Pushing the pace early on in the hot, windy conditions were the Unibet duo of Matt Wilson and Baden Cooke who looked intent on breaking up the field and forcing Davitamon-Lotto and Astana to do the chasing. Matt Wilson in particular looked in fine form and it was he, who after many attempts launched the successful move of the race with Davitamon-Lotto’s Nick Gates glued to his backwheel. 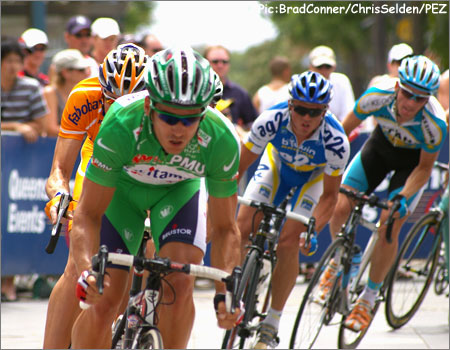 Robbie McEwen may have been wearing his green jersey but there was no sprint victory for the Tour de France champion today as his team mate Nick Gates stole the show.

In form German based pro Jason Phillips (2XU Clothing) saw the danger of this move and jumped across with Baden Cooke (Unibet) making this a great move for the Unibet team.

Except for some minor one and two rider crashes in the peloton the race had been relatively free of controversy so far but this was all about to change. With the strong four man group of Gates, Phillips, Wilson and Cooke up the road and working well sprinters, Graeme Brown (Rabobank), Allan Davis (Astana) and three others saw that this was the key move of the race so they tried to bridge up to the leading quartet. 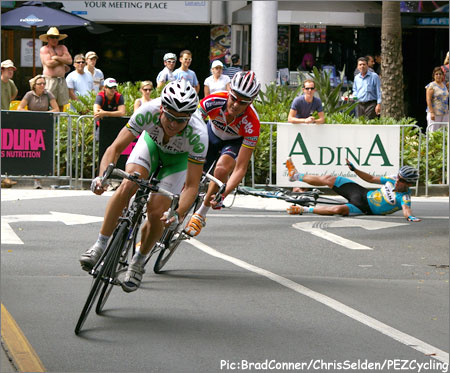 PEZ photographer, Brad Conner, was the only man to capture the truth behind the controversy as he grabbed this photo of Allan Davis (Astana) hitting the deck just metres from joining the breakaway riders of Gates and Wilson.

The chase group being led by Allan Davis (Astana) were less than five metres off the back of Nick Gates’ wheel when Davis crashed on the slippery second corner and caused the group to all run wide. Under the rules, riders involved in a crash are allowed one lap out so the group sat up, Davis remounted and they then joined Gates and co. in the breakaway on the next lap.

Meanwhile on the other side of the course and completely unsighted to the crash the commissaires were unhappy with this decision by the group as they felt that the riders should have rejoined back in the peloton and not in the breakaway group. What happened next was nothing short of mass confusion as riders in the peloton complained about the riders being in the break, there were complaints in the breakaway group too and of course the commissaires complained…

Now every bike racer knows that the commissaires are always right – or at least they will always win and this held true as they red flagged the race in an unprecedented move stopping the riders at the top of the main straight and explaining their actions. As a result of this mid race debriefing by the commisaires, the original four riders were the only riders allowed in the break and they were restarted alone, followed by a very angry peloton thirty seconds later. 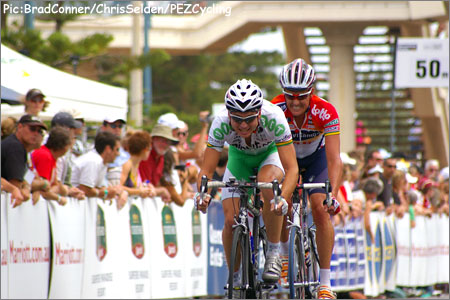 Local rider, Tony Mann (Coast Cyclery) was one of the riders who was pulled out of the break by the commisaires and after the restart he set off again in an attempt to get back on. With only 15 minutes remaining though and one rider versus four top flight pros the odds were against him but he tried valiantly, “I worked to get there in the first place so I just said I’m going to get back.” 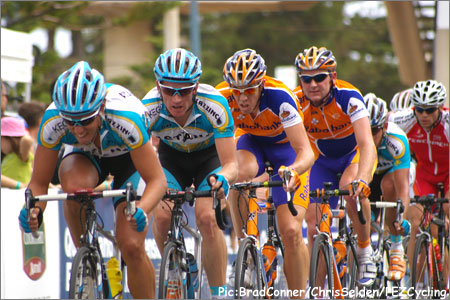 An awesome display of ProTour power by Rabobank and Astana towards the end of the race almost brought the race back together but it was all too late.

Meanwhile the rest of the peloton which included some very disgruntled riders in Brown and Davis seemed to take a lap or two off as they rolled around slowly seemingly in protest. That didn’t last long though as the guys realised that victory is the best revenge so Davis and Brown ordered their team mates to the front and tried to chase down the now very large gap.

The gap proved to be just too big though and the race for victory was on between the front four. With two Unibet riders including 2003’s Tour de France green jersey winner, Baden Cooke in the front group, chances of a Unibet victory looked good but in a surprise move with two laps to go Matt Wilson took off and only Gates was able to follow. 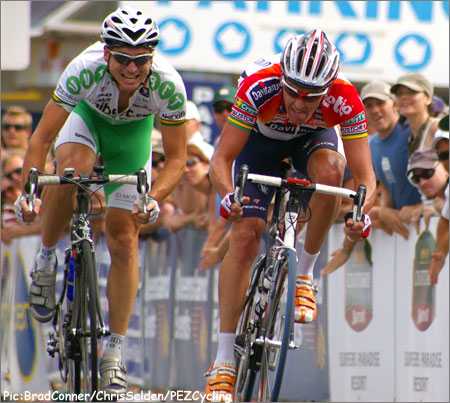 Two lead out men of Tour de France green jersey winners sprinting it out for the win? It’s not often you see this sight and it was the Davitamon-Lotto man who took the win by a tongue…

Gritting his teeth, Gates was eyeing off a rare chance for victory and coming into the final straight he hit out early and just held off Wilson by less than a bike length in the long tail wind sprint. Cooke then easily accounted for Phillips in the sprint for 3rd with a determined Mann holding on for 5th and a very annoyed Brown leading the bunch home for 6th.

Speaking to PEZ after the finish Gates had this to say about his great victory and his new found sprinting skills.

Pez: Towards the end there, was it a surprise that Matty Wilson jumped away?

Gates: Well with two guys from the one team I knew I had to stick with them and I really had my eye on Matty as Cookie is way too quick for me so I just followed him, he was riding really strong and he basically towed me to the finish.

Pez: Leading Robbie out over the years you’ve now developed a pretty good sprint yourself?

Gates: Yeah (laughing) not too bad. I knew as we came into the finish straight if I hit out first it would be hard to come around me so I’m pretty happy.

Pretty happy indeed – a great win by a hard working domestique in front of a high quality field who overcame a tough circuit, controversy and a one-two effort by Unibet to take a well deserved victory.

For more on Nick ‘Gatesy’ Gates check out Pez’s interview with him from 2004.