Team CSC again tested their hand at the Black Jack table today and it paid off big-time as Fabian Cancellera won the second stage of Post Danmark Rundt. The Swiss attacked in the final kilometers of the race to win the stage and take the overall lead. Stuart O’Grady came up short again today but went one better than yesterday crossing the line at number two – 25 seconds after. 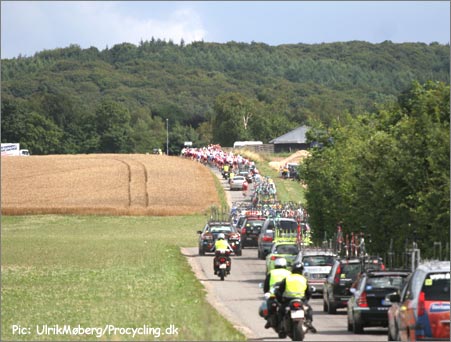 Today’s stage was considered the “Queen Stage” in this year’s Tour. It was a 185 km sojourn from Aalestrup to Vejle where the riders reached the highest point in the race — Yding Skovhшj at 173 meters above sea level. In the finishing town of Vejle, the riders did three rounds on a finishing circuit that included the feared Moellebakken climb with a 21% grade.

As with yesterday, we saw again today a four man breakaway that lasted for 100km. The break went away at around the 40km mark and included Lasse Bшchmann (Glud & Marstrand), Renй Jшrgensen (Team Designa Kшkken), Maarten Tjallingi (Skil Shimano) and Marcin Osinski (Team Intel Action). They were sucked back into the abyss of a fast charging peloton with riders jockeying for position before the feared Moellebakken climb in the town of Vejle. 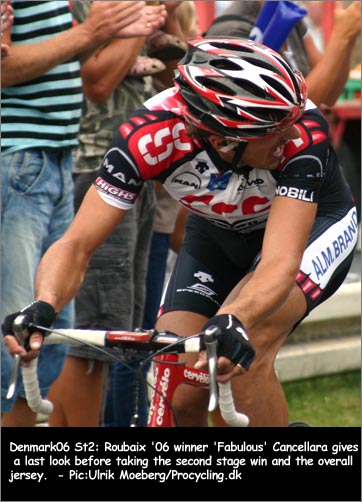 The tempo blasted the peloton into small bits and the remaining group was reduced to about 20 riders including O’Grady and Cancellera. Several riders including four from CSC – Matti Breschel, Kurt-Asle Arvesen, Stuart O’Grady and Lars Bak CSC tried to get away from the group on the climb. But the 5th time was a charm and Cancellara was able to solo to the finish with a 20 second lead on teammate O’Grady while Thomas Ziegler from T-Mobile was
third.

After the stage Cancellara collected both the yellow leader’s jersey and the white under 23 competition jersey. It looks as if the overall winner of the race has emerged, seeing as Cancellara’s time-trialing abilities are far superior that any other rider in the race, and that fact that Cadel Evans says that he is only in Denmark for training. 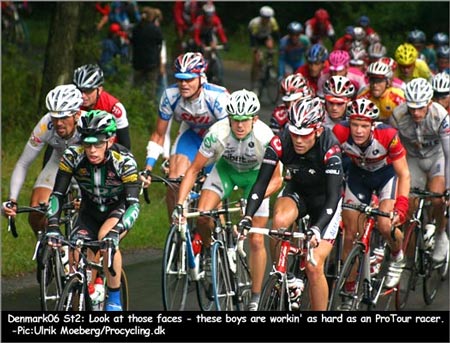 • Astounding Fact: Did you know that Thursday (in Scandinavia Thorsdag “Thor’s Day”) is named after the Nordic God of Thunder Thor? We met him yesterday remember!