The hills are alive with the sound of………hang on, hang on it’s no movie here, the Tour of Germany has hit the mountains of Austria and now it’s time to find out who the real protagonists of this year’s race are.

Can Levi Leipheimer recapture his German title of 2005 or will a new favourite announce his intentions today? It’s hard to pick a favourite in this year’s race as the German Tour has a real mix of riders wanting to prove themselves. Some, after not being selected for the Tour de France have some things to prove and others, like Leipheimer wanting to prove something else after the Tour de France. Being a full Pro Tour race all 20 Protour teams are here along with two wildcards, Team Wiesenhof of Germany and Team Vorarlberg/Volksbank of Austria. 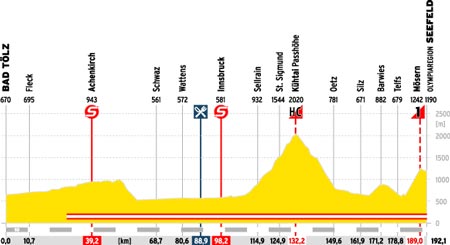 The route today was 192km long with 1 HC category climb after 115km and then a 1st category climb to finish the day off nicely……Well it sounded like a tough finish to the day – what was the start like? In three words, cold, wet and windy. 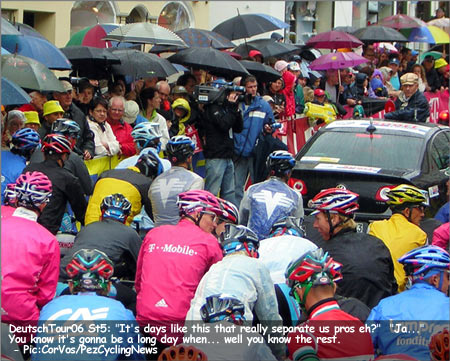 The weather was terrible at the start with riders looking like they were racing in October/November not August as most riders wore everything they owned. Slowly the weather started to improve though and over the top of the HC climb of Kuhtai Passhohe a group of 6 riders got away. They were, Laszlo Bodrogi (Credit Agricole), Paolo Fornaciari (Lampre), Jan Boven (Rabobank), Christian Knees (Milram) and Robert Retschke from the wildcard team Wiesenhof.

This group worked well together and established a quality break with a steady 2:30 min gap. With 6 teams represented up front, that left 16 teams back in the peloton to chase, but none showed a great interest in the effort. T-Mobile, unrepresented in the break and being in their home tour kept the gap to a reasonable distance but it wasn’t until the other wildcard team of the race, Vorarlberg/Volksbank started chasing that the gap came down.

Led on the front by Swiss riders Pascal Hungerbuhler and Christoph Girschweiler this small Austrian team showed everybody that they weren’t in the race just to make up the numbers as they brought the gap back down to only a minute with 25km to go. Their chasing wasn’t just for the TV coverage though as they were hoping to set up their G.C man, Gerrit Glosmer ex Saeco rider and former winner of the Tour of Austria for the stage win. (Stay tuned to PEZ for an exclusive interview soon with Pascal Hungerbuhler as he talks of racing in his first Protour race and what it is like to ride on a small team in the tough world of pro bike racing.) 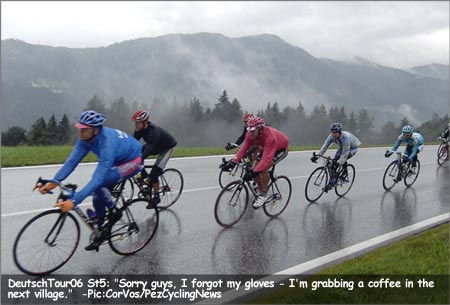 Ok, back to the race and with only a minute lead, Rosseler (Quickstep) realised that things were dire and something needed to be done. In his opinion, that something was going it alone so he attacked his breakaway companions just before the final climb started. With still 22km to go in windy, horrible conditions by himself, it was a big call…..

Soon enough, the rest of the breakaway was caught by a charging peloton which was now being led by CSC and T-Mobile and shortly after hitting the climb Rosseler was also caught. The peloton exploded under the relentless pace being set by CSC’s, Andy Schleck and soon the 160 rider strong peloton became a group of just 11! 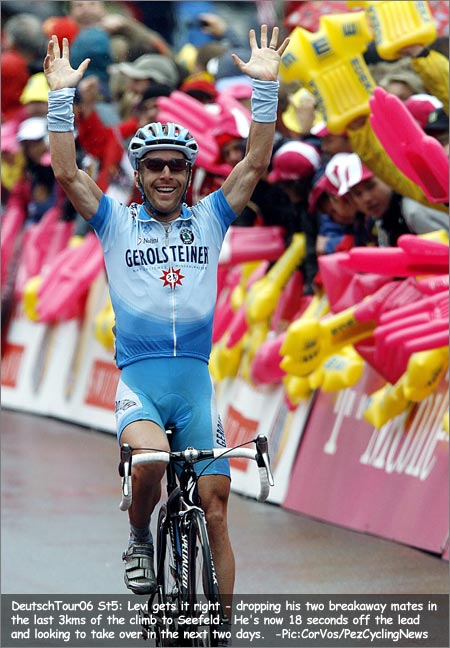 CSC had 3 men (Voigt, Schleck and Cuesta), Discovery had 2 (Devolder & Gusev) and everyone else was isolated. Amongst those with no team mates around them but still looking strong was the defending champion, Levi Leipheimer, Kashechkin (Astana) and Piepoli (Saunier Duval) and it was these 3 riders that rode away from the rest with 5 km to go. With 2.5km to go Leipheimer saw his chance and attacked the other two and built up a small 80m gap. Jens Voigt and Bruseghin (Lampre) rejoined Pieopli and Kaschenkin to help with the chase but it was all too late as Leipheimer powered to the line taking a well deserved win. The little man from the States has moved into a real favourite for the overall title jusy 18 seconds off the lead, and his main rivals most likely coming from new yellow jersey holder, Voigt, Discovery’s Gusev and Kashechkin from Astana.