Stage 7 in the Deutschland tour, it’s the time trial and the classification honours are on the line. Jens Voigt, the German powerhouse has proved unstoppable so far in the tour, can he continue his run of wins into the time trial?

After riding the course last week, I predicted a big strong ‘rouler’ type rider to set the pace and that was indeed the case as Credit Agricole’s, Laszlo Bodrogi burst out of the starting gates to record an amazing time of 46m06s over the 38km course. 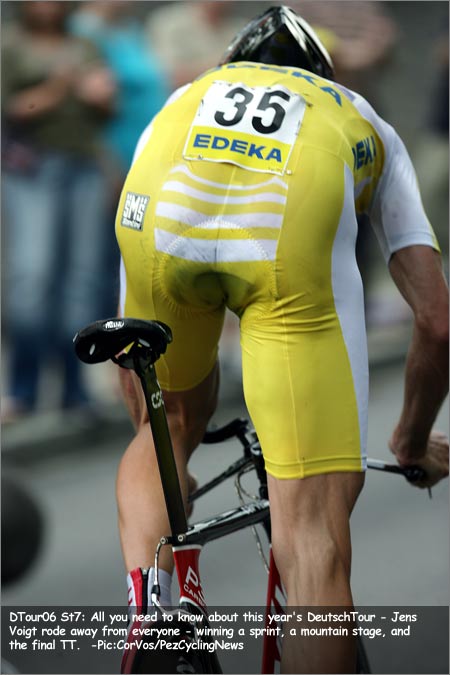 None of the other early starters could match the Hungarian’s pace until Germany’s time trial champion Sebastian Lang came within one second. Frustratingly close for the Gerolsteiner rider, but one second might as well be one minute in a time trial when you’re going for the stage win.

Another very strong ride was put in by Alexandre Vinokourov (Astana) as he powered home to the line only 2 seconds behind Bodrogi. Is the man from Kazakhstan warming up for the Vuelta by any chance? He certainly looked good today and I’m sure that he’ll be itching to prove himself in Spain after the disappointment of missing the Tour de France.

It was Vino’s team mate, Kashechkin who was Astana’s GC man in Germany though and he didn’t disappoint in the time trial, setting a sizzling pace and coming home only 17 seconds down on Bodrogi. This ride was good enough to move him from 5th overall overnight into 3rd place and onto the podium. After all the heartache and problems the Astana team has had over the last few months, their first race has been nothing but a success. One stage win and a 3rd overall in this Protour race shows that the riders haven’t lost their motivation…….they may have lost their director sportif, their sponsors and some team mates – but the motivation – and obviously the form is thriving strong. 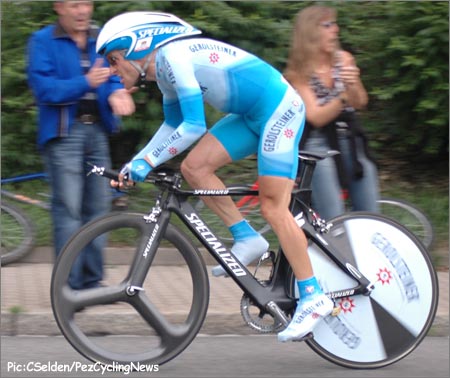 Levi put in a solid effort, but 5th was no match for herr Voigt.

The Main Event
Well with the minor podium place taken by Kashechkin it was now down to the battle for the yellow jersey. Last year’s champion, Levi Leipheimer (Gerolsteiner) vs Jens Voigt (CSC). Starting the day only 24 seconds down on Voigt, Levi was theoretically in with a chance for the win, but could the German be stopped? Jens has already won two stages, one in a sprint after a breakaway and one in the mountains. Clearly the man is on form. What did his team mates think of his chances? Luke Roberts, CSC’s Australian was asked exactly that by PEZ at the start and he was quick to reply, ‘No doubts. No doubts. Jens will win.’ Ok, so his team believed in him, could he deliver?

Well yes he could! Absolutely smashing Bodrogi’s time that had stood all day, Jens flew home in a time of 45m03s to beat Bodrogi by over a minute. An incredible time over such a course and an average speed of almost 51kph. Amazing effort. Leipheimer tried hard, coming home in 5th place on the day, but no one could get near Jens. In the German Tour this year he has shown he can sprint, he can climb and now that he can time trial. A deserving winner of the race and a national hero in Germany. Who needs Jan Ullrich? 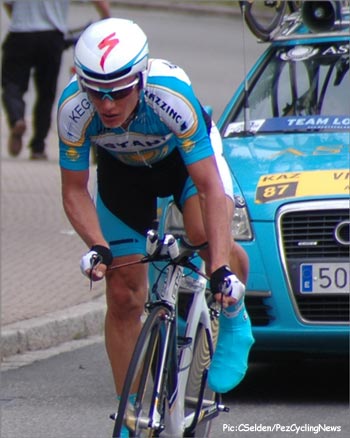 Alexandre Vinokourov’s strong showing proved his team might be down, but not anywhere near out.