PEZ-Man In Italia, Alessandro Federico, was on the spot at the Giro dell’Emilia last week for one of the great Italian Fall Classics. He brings us a fantastic report on the race, the people, the food, everything that makes a great race…well, great.

It has been a long day. The gorgeous city of Bologna showed herself at last with the last light of an Italian Fall Saturday. Today it has been the day of the race under the arches, the day of the Giro dell’Emilia. Not just a race for the hundreds of Bolognesi who decided to climb to the San Luca church situated on the top of the same named hill – it’s a sort of appointment for the tifosi and for the curious. 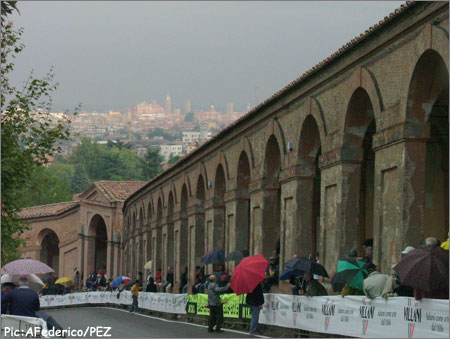 There’s a crowded party under the two kilometres of tunnel which lead to the top of the hill which overlooks Bologna and its towers. Just at the end of the day the ancient downtown showed the towers while the people were leaving the road. After a day of cycling, a great day started in the ancient town of Cento, famous in Italy for its carnival. 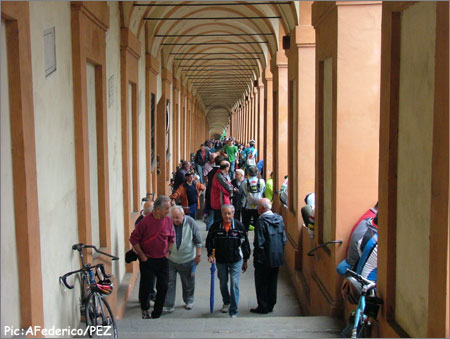 Every year this town wakes up in the strange atmosphere as the departure village of one of the ancient races of Europe. It’s curious to watch the faces and the curiosity of these people who are not familiar with races, sponsors, riders and motorhomes. 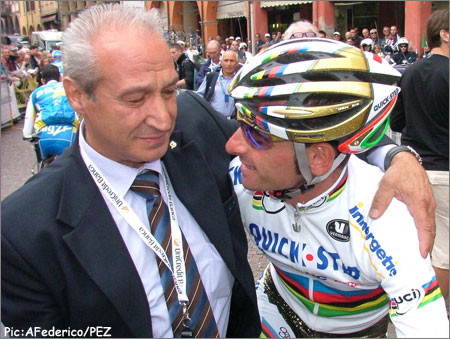 Adriano Amici is the organizer who every year fights against everything and everybody in order to find the funds necessary to keep the creature alive. Obviously the organization cannot be compared to Le Tour, but all the people involved work seriously and give to the final result a touch of high professionalism. The journalists are privileged guests: the press room is comfortable, the news from the race is clear and precise. Every year a party is organized for the journalists where it is possible to taste the best food of the region. 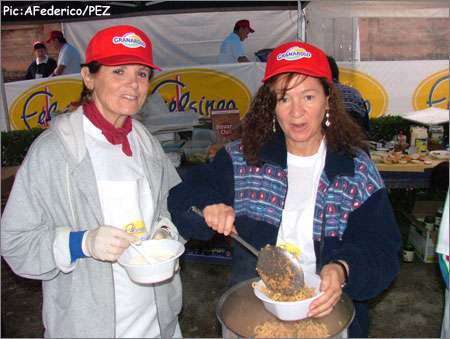 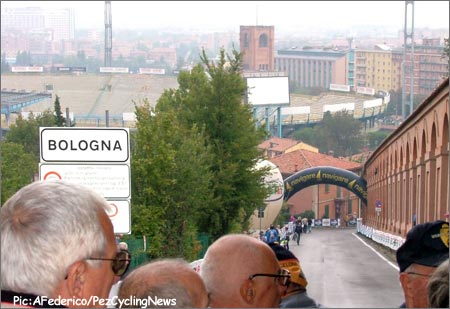 In soccer-mad Bologna, even the local stadium is empty today.

The riders are the real event of the day: at the departure the whole town of Cento is involved in the event and on the top of the San Luca every rider is a hero. Everybody understands exactly how difficult it is to ride the climb. The tifosi are the essential part of the day: can you imagine hundreds of voices screaming under the arches while the pros are riding with their last strength on a climb which presents slopes up to 18%? It’s a sort of wave that starts from the base of the San Luca and finishes on the top. As soon as the riders start the climb the screams fly under the arches and reach the top before the riders as a sort of premonition of the event. 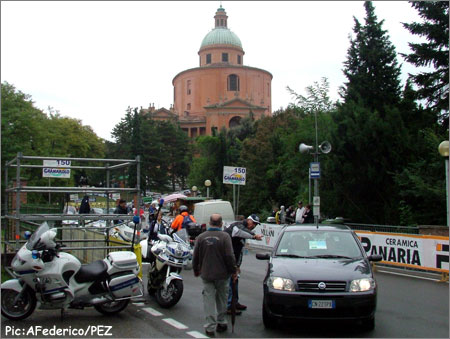 The race makes 4 climbs up the steep grades to the top of San Luca.

Every year the best Italian riders (and some foreign champions too) come here during the last week of great cycling to hopefully write their names on the list which includes Coppi, Bartali and Merckx (speaking about the past), Ullrich, Boogerd, Simoni and Basso during the last ten years. 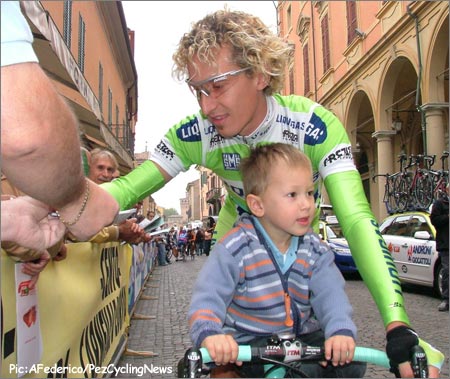 Franco Pellizotti signs shares the thrill of signing autographs with his son.

This year it has been Rebellin who has beaten Di Luca in the final sprint. The real race started a few kilometres before the first climb of the San Luca (the climb must be repeated 4 times) with a break headed by Schleck who was second last year. 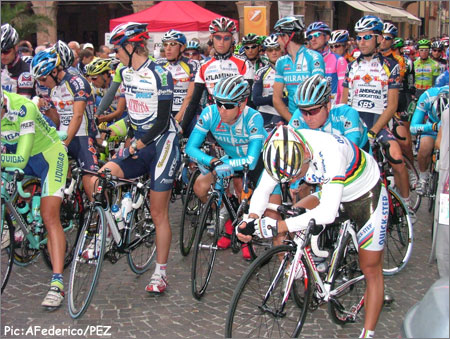 Riders remembered Paulo Bettini’s brother in silence before the start.

The reaction to this attack was promoted by Di Luca during the second passage. After a difficult year the Italian rider can now look forward to the Giro di Lombardia. A victory in the last big classic of the year can still save his season. 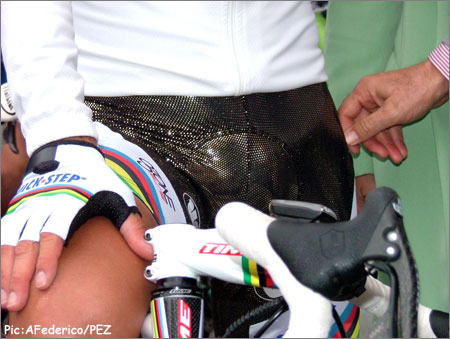 But the race has also been the first Italian race for the new world champion, Paolo Bettini, who arrived dressed with a new kit. His special shorts have interested more than one at the departure village and their colour remembers the gold medal won in Athens. His win in Salzburg was a special day. Just a few days before this race, his family lost Sauro, his brother. It’s unusual to meet a sad Bettini but his emotion was sometimes evident. A special moment was dedicated to his brother few minutes before the start. 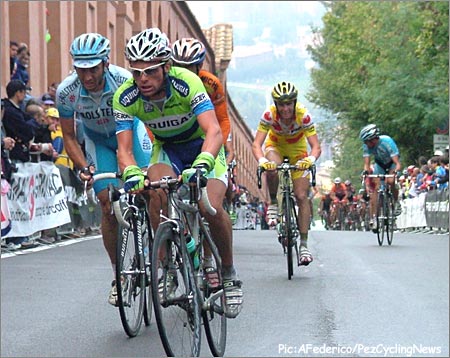 Also from his presence, from the respect he has got inside of his world, the cycling, you can understand how important it is to have him as leader for the Italians. The other riders look at him like a leader of the bunch, and the journalists too; it’s something you feel at the departure village when the crowd opens to his passage, or near his motorhome where not one tifosi risks to ask for an autograph. 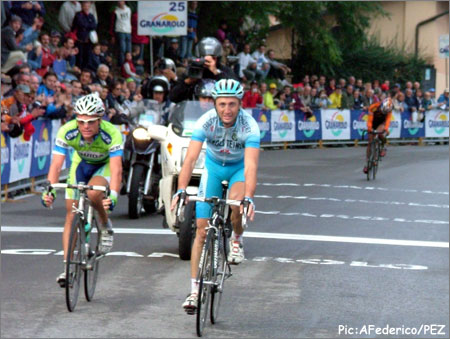 At last Bettini was done after the first passage on the San Luca. Coming down from the top the wave of screams followed him. Good bye sad champion. Someone says he wants to win a great Lombardia to dedicate to his brother. But we cannot think just about cycling. Sometimes the life overflows and bathes. Also under the arches. 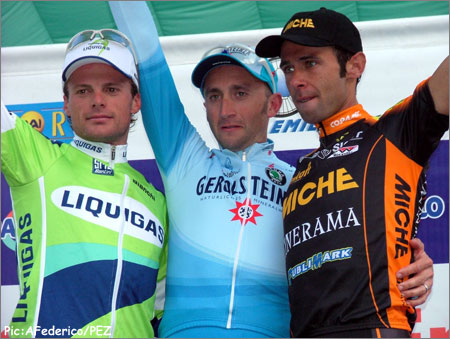