Het Volk: Frites Before the Storm

‘Kack!’ That’s AG2R’s Irish star Mark Scanlon’s view on Saturday’s Het Volk. ‘It’s so dangerous – the Belgians are crazy, jumping kerbs and all that kind of stuff.’ His exact phraseology was a tad more colourful, so we’ll leave it at that.

PEZ’s Ed Hood is ‘live and in color’ at this weekend’s Belgian spring season openers – Het Volk and KuurneBrssels-Kuurne. Arriving yesterday, he had a chance to check out some of the team bikes.

When we arrived at the Ghent Holiday Inn Friday afternoon Scanlon and his team mates were tinkering with their Decathlons; the Francaise des Jeux boys were doing likewise but there was a marked lack of ‘buzz’ among them, it wasn’t hard to figure that they would all rather be somewhere else. 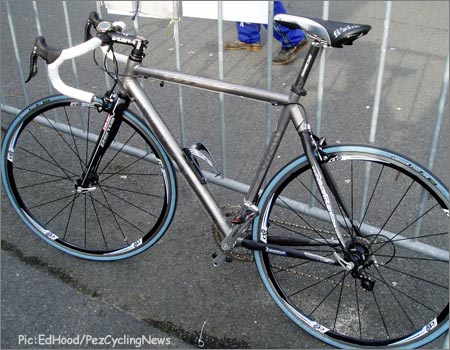 It’s 9.00 pm now and we’re in ‘t Coupee ‘tje, a little bar behind the station in Ghent, just five minutes walk from our hotel. We spent the morning doing the rounds of the bike shops; the most interesting of these was Fietsen Vandewalle at Lendelede from where owner Stefan Vandewalle sponsors a 25-man amateur team. He showed us one of the 25 sparkling-new, Chorus-equipped Merckx team bikes and gave us his views on Het Volk.

‘I think Quickstep will dominate the weekend, there’s Boonen, Bettini, Nuyens who could all win. I just hope that the races are interesting right to the finish and Quickstep and Lotto don’t kill the racing.’
We asked if he thought Lotto’s Peter van Petegem could add to his three previous Het Volk wins; ‘I think it’s maybe too late for Peter but you can’t right him off.’

Back at Ghent as well as A2R and FdeJ we tracked down Cofidis, Rabobank, Quickstep, Lotto, T-Mobile, Chocolade Jacques, Credit Agricole and Elk Haus-Simplon. The latter being a ‘continental professional’ team from Austria; the cardboard boxes which had contained their newly-built bikes were lying outside their team hotel – don’t expect much from them Saturday. 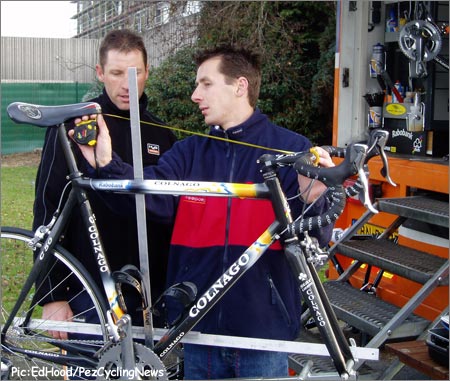 • Professionals though they may be, it doesn’t stop them from tampering with their positions at the eleventh hour, even an experienced pro like Marc Wauters was deep in conversation with his mechanic; spirit levels and tape measures well to the fore.

The march of carbon seems to have slowed down in the world of professional frames with only Rabobank [Colnago], Quickstep [Time], T-Mobile [Giant] and Credit Agricole [Look] of the ten teams we saw having all their riders on carbon mounts.

Lotto [Eddy Merckx] and F de J [Lapierre] had both carbon and aluminium frames on display, all the rest were on good-old aluminium with carbon forks; as were AG2R but they had a number of fresh out of the box titanium/carbon-yoked and -forked frames among their ‘off the shelf’ Decathlon team bikes. At Het Volk last year one or two of these were seen in the AG2R pits but disappeared after that. 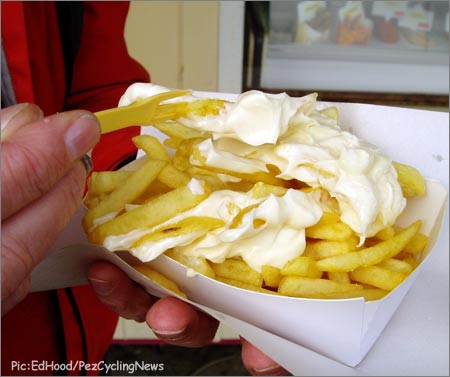 No self-respecting Belgian race fan passes up this staple to complete the racing experience.

Other trends in evidence – anatomic bars have lost a lot of ground, most riders have gone old-fashioned shallow and ‘square’; 25 mm tubulars are back in fashion, nicest in evidence being the Continentals on the T-Mobile Giants. Whilst carbon frames have stalled, cranks and seat pins in the ‘wonder-stuff’ are becoming more and more popular; Fizik saddles too march on; ‘fly-through’ seat tubes continue to feature on Giants, but few of the Quickstep Times now feature it.

Despite all the technology some things never change; Tom Steel’s Ridley has an ancient Rolls saddle, butchered and re-padded in the search for comfort. 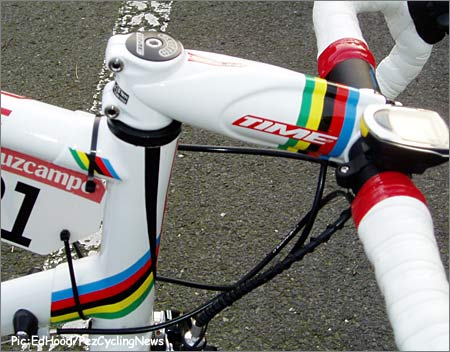 • Whilst the AG2R and Elk Haus bikes were freshly built, there were frame numbers in evidence on many velos from the GP Haribo and the Ruota del Sol; including Tom Boonen’s Time, a bit heavy-handed with the worlds bands for my taste.

Apart from Wauter’s we saw Filippo Pozzato and Robbie McEwen with his Ridley in need of TLC from the Lotto mechanic. The big stars though were all tucked-up, resting, thinking about the weather and how the dice will fall in the race.

Ghent pub-wisdom goes for Knaven [Quickstep]; de Peet – as they call Peter van Petegem round here; Klier [T-Mobile] and inevitably – Boonen.
Our game-plan tomorrow is to be up at the start to catch the rest of the hardware and the good quotes; then station ourselves on the Oude Kwaremont before repairing to de Peet’s fan club cafe at Brakel to watch the finale on tele with a beer or two.

Time for bed, catch you tomorrow.