Sunday was another cold day in Belgium, warmed up thanks to some hot racing as the weekend’s 2nd unofficial Classics opener ran across the cobbles and bergs from Kuurne to Brussels, and back. Ed Hood was trackside for the bergs, and bar-side for the finish…

It’s what Belgium has been waiting for all weekend – Boonen throws his long arms high as he takes the sprint; so he can add Kuurne-Brussels-Kuurne to Flanders, Roubaix and the Worlds? Well no, team-mate Nick Nuyens took the race a few seconds before, Tom has just out-sprinted ‘Rambo’ [aka Niko Eeckhout of Belgium/Chocolade Jacques] for third place; Leif Hoste [Belgium/Discovery] sneaked away for second, but all that really matters is that Quickstep have made amends for their abysmal showing on Saturday in Het Volk.

Whatever Patrick Lefevre said in the Holiday Inn last night was right on the money.

The bunch rounds the top of Cote de Trieu.

There weren’t many bare legs 4h37m32sec and 194 kilometres earlier when the bunch rolled out of Kuurne en route for the Flemish Ardennes. Unibet had had ‘dolly girls’ sporting umbrellas to shelter their riders from the sun a la Moto GP, daft but good publicity. It was the usual air-horns, whistles, revving motor bikes and general chaos as the bunch rolled-out. 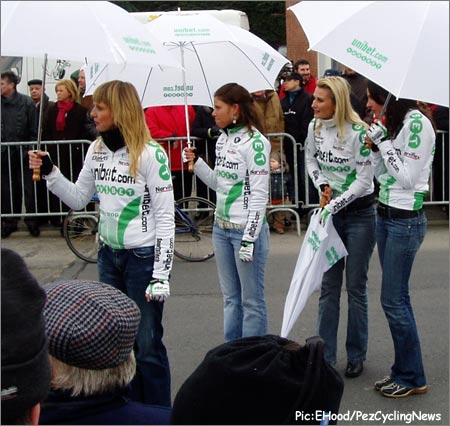 Unibet may not be known for winning races but they certainly are leaders in the ‘moto’ babe category.

Kuurne isn’t that much different from Het Volk, a few less kilometres and a few less hills; not quite as prestigious as its weekend neighbour but a great race to have on your palmares. The traffic chaos at Kuurne is every bit as bad as Het Volk so we headed straight for the Oude-Kwaremont at around 120 kilometres.

Throngs of digital souvenir hunters enjoying some Belgian ‘sunshine’ atop the Oude Kwaremont.

It was damn cold up there, standing under a grey sky in the remains of last year’s maize crop with an icy wind scouring the ridge. At the top of the climb the cobbles sit some two metres below the level of the surrounding fields so spectators stand above the riders who are in some huge cobbled trench. 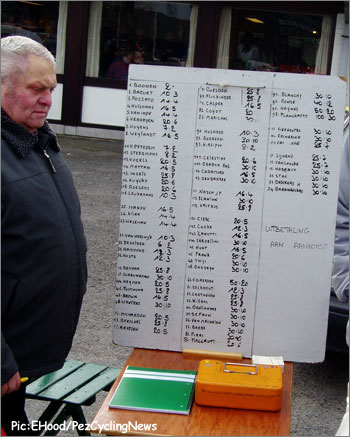 This guy may not be as big as Unibet or Ladbrokes, but he was doing brisk business.

Hoste’s Discovery team-mate Roger Hammond [GB] was also well in the running, more than could be said for T-Mobile’s ‘man of the Spring classics’ Stephan Wesemann [Germany] who was well off the back. Whilst the bunch rode a loop round through Ronse we walked to the top of the Knokteberg. 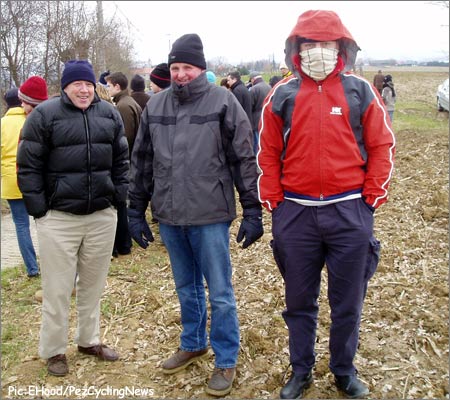 Did you hear the one about the three Englishmen standing in a cornfield at a Belgian bike race…?

Most of the hills which feature in the Spring Classics ascend a ridge behind Oudenaarde – some ten kilometres long by five kilometres wide – from different directions, meaning that the summits of some are close together and it’s possible to catch a couple of climbs without driving. 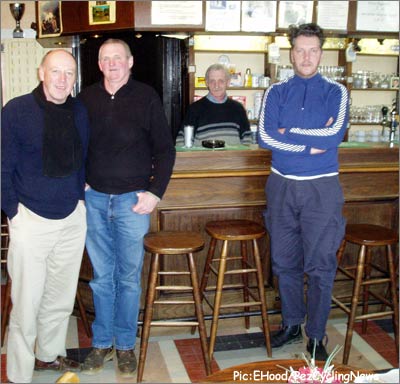 Oh… well then maybe you heard the one about three the Englishmen who went into a bar after standing in a cornfield at a Belgian bike race…?

By the top of the Cote de Trieu it was the same story, the three strong-men still clear and the other favourites in hot pursuit. Wessemann, along with Lithuanian champion Tomas Vaitkus [AG2R] was asking the locals for the best short-cut off the ridge so as they could pick-up a warm team car.

We waited on the traffic clearing and headed down the Cote, on to Avelgem and the TV in The Sports Cafй. The old proprietor opens his bar seven days including 6.00 am until 10.00 pm Monday to Friday. En route we heard on the car radio that Hammond had joined the break and as we settled down with our pils we confirmed that with 50 kilometres to go there were now six men up the road – Baguet, Mattan, Bernucci, Hammond, Posthuma [Holland/Rabobank] and Thys [Belgium/Unibet] with another group chasing. 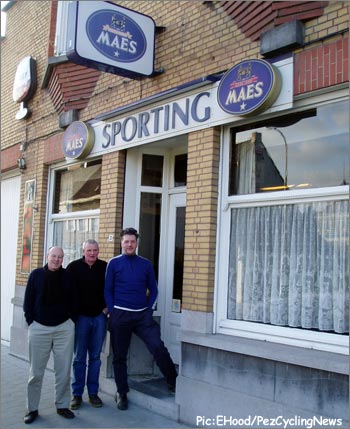 No again..? Well you must know the one about the…. Oh bloody well forget it.

At 44 kilometres to go Boonen made his move from the bunch and started the final phase of the race with groups merging and splitting until with 20 kilometres there were twelve men up the road. This group contained favourites Boonen, team-mate and 2005 Het Volk winner Nick Nuyens [Belgium], Hoste, Eeckhout and fast-improving Gert Steegmans [Belgium/Lotto] who has two stage wins in the Algarve Tour under his belt this year already.

With 12 kilometres to go the group split, leaving five up-front including Boonen, Steegmans and Eeckhout. It looked like the game was up for Nuyens and Hoste, but then technology took a hand – Nuyens asked Boonen, over the team radio to stop working so as he could get back up and they could; ‘play the team game.’

At nine to go Nuyens and Hoste got back and the attacks and counter-attacks started. Nuyens went at five to go, was fetched back but went again at four to go – the rest looked at each other as Boonen and team-mate Kevin Van Impe [Belgium] rode shotgun for ‘Super Nick’.

Nuyens is no stylist, reflecting the hard-riding kermesse racing style he was weaned on but he knows how to build a gap and it was a Kuurne solo victory to add to last year’s Het Volk. 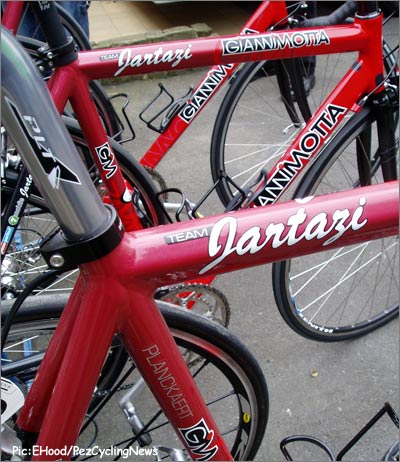 Signs of the next generation of Belgian hardmen – Francesco Plankaert’s bike.

In the post-race interview Boonen was modest and took time to mention the fact that Belgium cycling is in good shape with eight young riders in the first ten. And – if you saw pictures of Nuyens waving a stuffed donkey around on the podium – it’s the symbol of Kuurne and the name given to its inhabitants for their ‘stubborn persistence’ – only on PEZ folks! 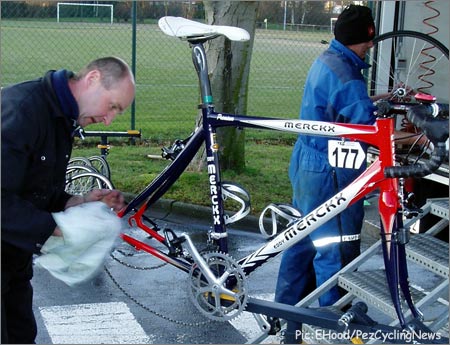 • For us it was back to Kuurne and a final wander round the team bikes, it’s a matter of honour with us that as long as there is a bike still to go in a service course truck we stay! Last away was Belgian six-day rider Walter Van Mechelen’s, Eddy Merckx into the Chocolade Jacques truck.

Our tip for Flanders?
Steegmans.
Talk to you soon.