The 2007 La Vuelta route was announced yesterday, so I hot-tailed it down to the center of cycling chit-chat and hub of the PEZ Spanish Bureau, my local pub, the Bar Pol-Mar to get the first impressions of next year’s race.

As in previous years I’ve rounded up the usual collection of drinkers and time-wasters to give their unfounded and ill judged views on La Vuelta’s course, but this year is different, I actually have two bike riders who have turned a pedal in anger to join our panel of ‘experts’ on the 2007 edition, they are Alex Coutts and David Harrigan. 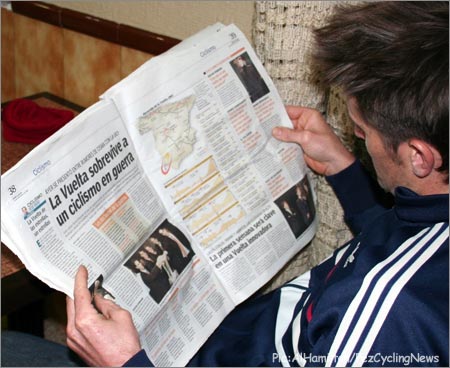 The thing about the Spanish language is… they have a different word for everything….

First, let’s meet our 4 guest panelists:
Alex Coutts (Couttsie) has been a pro for 4 years, based in Belgium and Italy; he has represented Great Britain at World level and ridden for Scotland at the Commonwealth Games. At 23 he has many years ahead of him and next season will be riding for the team with probably the best name in the peloton, Babes Only, which I learned sells goods for tiny-tots, and co-sponsored by Villapark Lingameer and Flanders. Alex is an amateur painter and decorator, keen fisherman and self taught (failed) hair stylist “honest it’ll grow back in a couple of days!” 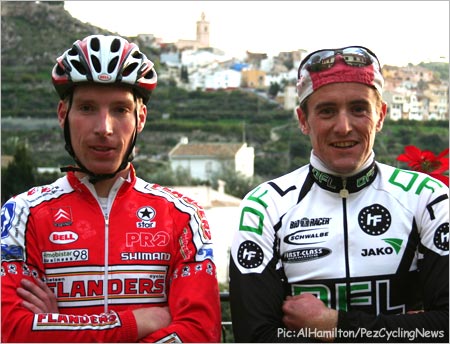 David Harrigan (Harro) from New South Wales Australia has been racing for many years, starting as a tri-athlete, and has been based in Belgium since 2002, living with his girlfriend near Antwerp. Harro has raced all over the world with excellent results in Australia, Austria, Belgium, France, Switzerland, Denmark, Holland, Serbia, China and was second in the King of the Mountains prize in the Tour of Uruguay. Next season he will be riding for British registered, Belgian based team with mostly Australian riders, DFL. David likes red wine, Parmesan cheese, massages, more red wine and doesn’t mind paying a lot of money to have his haircut.

Ximo is making his second appearnace on our panel and hails from a German back-ground, hence his liking for Herr Ullrich. Ximo works away from Spain in the summer as he doesn’t like hot weather, but comes back for the cold in the winter! He favours Spanish Aguila beer, now owned by the Dutch company Amstel.

Pedro also makes a return engagement to our illustrious panel, and although he’s mum about his age, we guess he’s in his 70’s. Pedro still works, hates Jean Marie Leblanc and is not too keen on Verbruggen either, watches a lot of football, but doesn’t support any teams, specially the Polop local team who are really s**t !

The unofficial home of the PEZ Spanish bureau – the Bar-Polmar.

PEZ: Here we are in the Pol-Mar, what does everyone think of next year’s La Vuelta?

Pedro – Well again its no where near here, how are we going to go and watch it when the nearest stage is nearly 100 kilometers away, what has La Vuelta got against Valencia, we were Gold Jersey sponsors a few years ago.

Ximo – Will Ullrich be riding?

Harro – He will be back, sooner or later, nothing will be proven, he’ll get a non-Pro-Tour team, one run like the Coast team (ie: badly) and he will have to pull out all the stops to do some good rides, the Vuelta, who knows, he might be there? 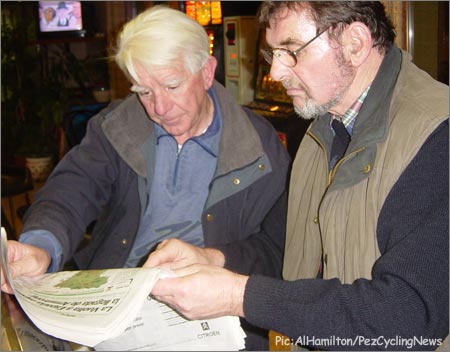 PEZ: OK what about the route?

Couttsie – It looks hard, specially stages four, five and then stages nine and ten, the stage to the Ski Station at Cerler looks like a killer following the 49 kilometer time trial the day before.

Harro – Yea to me it looks like it could be all over by the first rest day after the finish in Andorra. By that point we should know who wants to win! Their hat will definitely need to be in the ring by that point. Vino had better turn up a bit fitter, coz he cant race himself into fitness, the start is too hard, he’ll lose time.

Couttsie – There are only three mountain stages after that and only one of them is a summit finish and it’s only a 1st Cat climb, not Hors Category.

At this point Pedro and Ximo have lost interest and are looking at the local Daily Distraction on the back page of AS (sports newspaper).

PEZ: – Lads! Lads! Will you put that paper down and tell me what the man in the street thinks of this years La Vuelta?

Ximo – Isn’t it about time you bought a drink?

Pedro – I thought they were trying to make the Vuelta easier, there are two stages back to back over 200 kilometers and the stage to Arcalis is 220 kilometers long, less mountains, more kilometers, no matter, it will be more exciting than that French excuse for a publicity caravan! 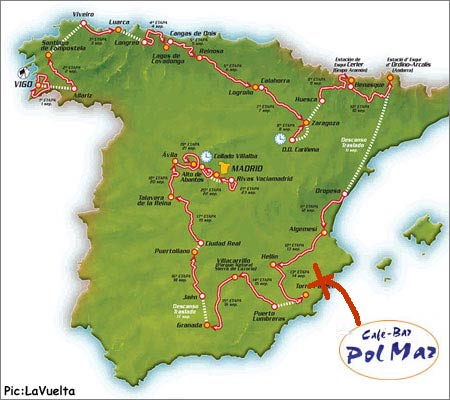 According to some of our panel, the Vuelta route passing us by more than 100km is downright insulting…

Ximo – The Kazaks will be hard to beat, if they don’t get a ride at the Tour they will be out to dominate again, but Valverde and Pereiro must be favorites, is Mancebo coming back? If so he will be all fired up.

Couttsie – Vino won’t be there, he will have won the Tour by then, he’ll be partying by then.

Pedro – I think Valverde if he has a bad Tour, otherwise I think it will be someone young and new, someone we have not heard a lot of, yet.

Harro – Could be Menchov again, it suits his style and again if he does a shit Tour he’ll want save season with a good ride in La Vuelta, it’s a long shot. Kasheskin will be creeping, maybe that Slovak guy at Discovery.

PEZ: – I think that’s as far as we will get on La Vuelta, let’s turn to Alex and David, what do you want from next year?

Couttsie – I would like to do well in the races in France that the team ride, like Besseges Poli Normandy, ones with a few hills in them, then in Belgium I want to show well in Brabantse Pijl, it has a hard climb on the finishing circuit, it’s real hard Belgian racing at its best. I hope they ride some good stage races, I think they would suit me. I might try to get a ride in the Tour of Ireland (Ras), but that would have to be with a composite team. After last year I’m really motivated to get some top ten places in good races.

Harro – I want a good classics, early season, healthy baby in mid April and clock up a fair whack of UCI points before my early exit to the season to tie the knot to the beautiful mother of my perfect little child.

PEZ: – David what do you think of Nico Mattan coming to DFL?

Harro – It’s good, he’s an experienced rider, and it is a guarantee that the team will get rides in races that maybe we may have not got in, hopefully he’s not the last big acquisition for the team, he’s a real star in Belgium.

PEZ: Landis, Guilty at the Tour?

Couttsie – Mmmmm I don’t think so. He’s actually still the winner of the Tour at the moment.

Well that’s next year’s La Vuelta sorted out, thanks to Javi for letting us use his Bar and thanks to Pedro and Ximo, payment in drinks as usual. Alex and David, good luck next year and I’m sure your winter training here in Spain will pay off, and Alex when are you going to finish painting my hall and stairs?