LBL06: PEZ Gets In Early

LBL is already history, but the news is still fresh, especially looking at the course and how the final kilometers played out to produce the first Spanish winner in history – it’s even better to see who the riders themselves saw as contenders as well as fans and people in the know. Ed Hood was in the Ardennes a few days in advance of LBL and got hold of some interesting characters.

La Redoute – The Monster
You cross the bridge, the water in the river is clear and ducks are swimming, take a left then a right past the pastry shop and through the village, it’s narrow but not too steep. Just after you leave the village you turn right and it rears straight up, disappearing round a left hander then getting even steeper through a series of left and right handers before it levels out a little before the top; it’s way steeper than it appears on TV. 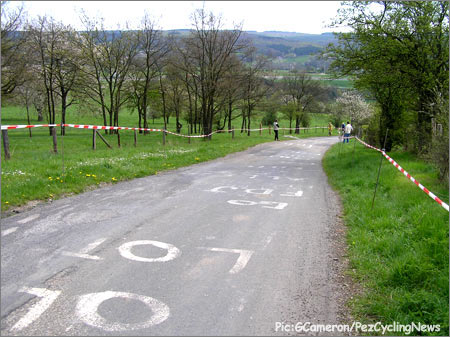 La Redoute without the hordes and throngs of people.

The race wasn’t won on La Redoute in 2006, but it was lost by many. Ivan Basso almost singlehandedly managed to whittle the lead group down to around 15, he was of course aided in his task by frequent attacks from all comers, but it was Basso who was consistently there, making sure the pace never let up. 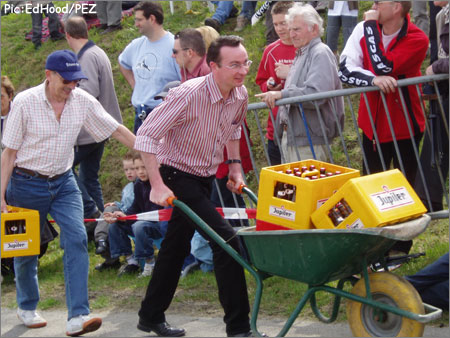 There’s usually a bunch at the pastry shop, but at the top of La Redoute [to quote Billy Paul] – only the strong survive; it’s 35 kilometres to the finish, but it’s the longest 35 k in the world, even in a car. Over the top it drops fast and not too technical to Sprimont where the next climb lies, not too long but painful if you haven’t recovered from La Redoute. Then it drops and drops to the river Ourthe valley, fast and straight to start with, then twisting and technical. 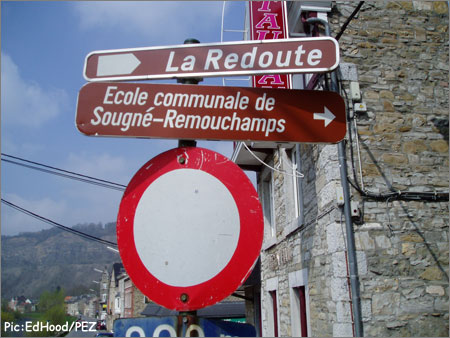 Life After La Redoute
The river valley road from Esneux to Tilff is nice and flat, but not for long the Sart Tilman climb begins immediately after the river crossing at Tilff, it’s not steep but winds up through the trees for kilometre after kilometre. There’s a horrible retail park at the top where the pizza place was getting its spring clean ready for the L-B-L customers.

It was here that Boogerd and Rodriguez were holding to their tenuous lead, and Boogerd was continuously tightening the screw to poor Joaquin Rodriguez. Behind, Paolo Bettini got a little too antsy and blew a major gasket when he busted off the front, dropping everyone – he rode Valverde right off his wheel. 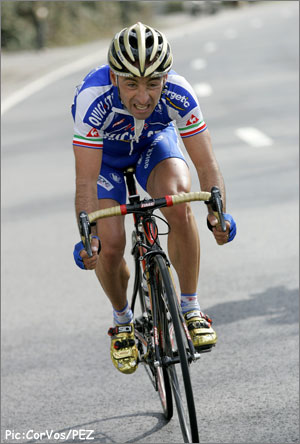 Bettini had a solid go late in the race, but the move turned to naught.

The descent starts almost immediately, a 53 x 11 job down the dual carriageway, past a vision of industrial hell, complete with belching chimneys. 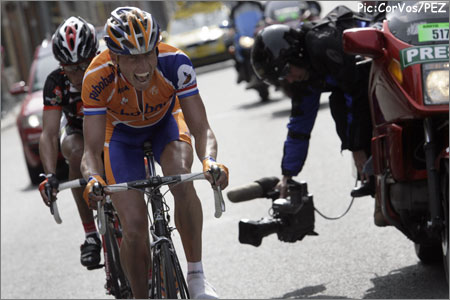 Boogerd put up a valiant effort as well, launching with 29k to go and only pulled back with 4k remaining – he still managed 5th.

Beautiful Suburban Liege
At the bottom it’s a left at the Standard Liege football ground then a right into the back streets, cobbles, bends, pot holes and a never ending climb through the grimy old housing estates to the finish at another retail park in the Liege suburb of Ans; only the last 400 metres are flat.

As my buddy Viktor said; ‘I don’t like races that are glamorous, but this is taking it too far.’ It is certainly the toughest and most dispiriting finale for a classic you could imagine; there simply cannot be an undeserving winner tomorrow.

The depressing scene around the riders was indeed not visible for the race – as the 12-man finale definitely drew all eyes and all attention to the continuing attacks from all angles, as Valverde calmly waited for his time. 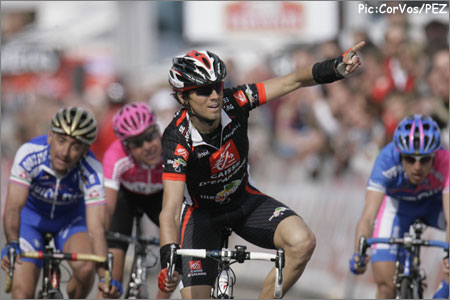 Alejandro Valverde took the win by a mile.

Racers Make Their Picks Pre-Race
Down at the Palais des Princes in Liege city centre it’s much more glitzy for the, ‘presantatie van de teams.’

It’s the usual organised chaos, but we get in there as soon as they arrive, first-up is world time trial champion, Michael Rogers [Australia & T-Mobile]; ‘Yeah I’m happy with the form, it’s a hard course but I’m a protected rider in the team, prediction? Michael Rogers will be up there!’

Australian, Alan Peiper, suited-up as befits a Lotto DS gives us his prediction, ‘Bettini from Valverde and Evans.’

Former roadman-sprinter and six-day star, Italian Adriano Baffi tips his Phonak boy Perdiquero as winner – long odds on that one I think Adriano! 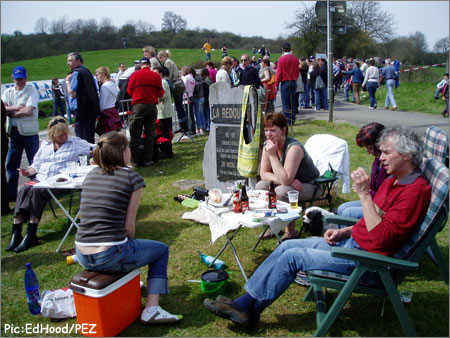 A little picnic mid-race is what the riders would love to do, especially on the Redoute.

The Euskaltel car goes past, full of sad little faces, Sanchez may be a favourite but his homies aren’t excited by the prospect of having to look after Samuel all over the Ardennes.

A lot of the riders, Bettini included, walk out of the presentation avoiding eye-contact with anyone and make a bee-line for the team bus, not smiling Oscar Freire [Spain & Rabobank] though – he doesn’t turn down a single autograph request. 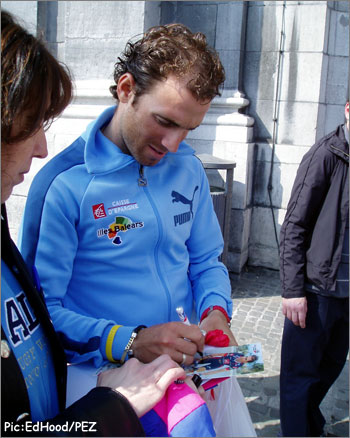 Alejandro Valverde was more than gracious with his time pre-race.

Vino [Alexandre Vinokourov, Kazakhstan & Liberty Seguros] may have won last year, but this year the average age of his team looks too young for an enterprise like this.

Young Irishman Philip Deignan looked good in his AG2R leisure gear; ‘The form’s pretty average, I crashed in the GP of Marseilles and broke my collar bone, this is only my fifth or sixth race since I got back on the bike; but it will be good experience for me. I’ve fitted in well with the team and have been told I’m riding the Giro this year. Predictions? Bettini.’

Cadel Evans [Australia & Lotto] talks as he signs autographs; ‘The form’s OK, game plan? Be there at the front when the shit goes down! My season is about the Tour, but tomorrow is a big part of it too. Top three? Bettini first, from Boogerd and Evans!’

Why can’t everyone be as easy to talk to as Chris Horner [USA & Lotto]? ‘The form is good – I can follow most of the moves but not all of them. I last rode the race in 2001 but we rode the last 100 k yesterday; of our guys Cadel and Leukemans [Bjorn, Belgium] are going the best, Cadel rode a good Fleche and maybe tomorrow will be his day. But really you can perm the top ten at Amstel and Fleche and any one of them could win. CSC, Rabobank and Gerolsteiner all looked good at the Fleche, so did Di Luca [Danilo, Italy & Liquigas] but his team didn’t, it might even end up like last year where there’s only one guy from each team away and there’s no tactics to play. Cadel and Leukemans are our protected riders but we’ll decide the final choice on the road. If I get top 10 or 15 I’ll be happy.’

Thanks Chris, and you sure look skinny!

The Pundits Weigh-In
Ed Hood, being the thorough journalist, was not content with talking with riders and managers though – he headed to those that really know what’s going on: the pundits in bars and bike shops.

The mission today was to get opinion on who will win tomorrow; first stop was Oudenaarde, home of continental team Flanders, who operate out of team manager and owner Frans Assez’s bike shop. Frans was in hospital when we visited, awaiting a heart by-pass, hard to imagine that this most resilient and indestructible of men should be a mortal like us. Brother Luc was on hand to give us the Assez party line though; ‘It will be almost certainly be an Italian, if not then Vinokourov again.’

We asked Luc to pass-on our good wished to Frans and headed off to Kruishoutem to meet a man who knows about classics; ex-Cofidis and Lotto pro Chris Peers, who now runs ‘The Wheel’ cafй. The bookies board was on the wall with Bettini as favourite at 3:1 but Chris reckoned; ‘Bettini is good but not ‘super’ just now, I think the winner will be Spanish – Valverde maybe, but I think it will be Samuel Sanchez , he was good in the Tour of the Basque country and close at the Fleche.’ We asked how he was coping with retirement; ‘Yes, it’s not so bad, I teach ‘spinning’ now for 16 hours a week, it stops my stomach from swelling!’

My travelling companion, Viktor raced in Belgium back in the 70s and shares Chris’ Iberian leanings; ‘It’ll be a Spaniard, but most likely Freire, he was cruising at the Fleche, I think he was just using it as preparation for Liege.’

We finished our coffees and headed for the coast, Tom Boonen may be on holiday in Tenerife but we felt that we needed his take on the race, so it was off to his fan club in Middelkerke to hear what they had to say. It’s hard to miss the Taverne Wembley, one street back from the sea, there are larger than life, full colour paintings of the great man outside and the walls are covered with framed photographs of him. The large gentleman behind the ‘Tom’s beer’ tap is a man of few words; ‘Cunego!’ is his one word reply, it’s obvious that a race without Tom doesn’t merit too much discussion; we parted with four euros for two Tom Boonen stickers and bade our farewells.

Stephan de Walle provides the Merckx team bikes for amateur squad Sonens-Germonde from his new shop is in Lendelede, he was busy assembling a bike when we arrived – a Merckx, what else? ‘It’s difficult to say, but I think it will be Bettini,’ I ask if he thinks there will be any Belgians in the mix; ‘no, I don’t think so, not on those parcours.’

Not far from Stephan’s shop is ‘designer’ bike shop Sportivo in Bavikove looking for all the world like an exclusive furniture emporium and packed with expensive goodies, ex-Lance spanner-man George Noyes mechanics here, but he’s not around and the staff are too busy taking euros from rich customers to worry about L-B-L.

On the run-in to Ghent we stopped at Walter Godefroot’s bike super-store which sits cheek-by-jowl with the Ferrari garage, with prices to match. Ironically they stock a lot of Treks – a certain guy from Texas rode these and made Walter’s life as Telecom DS miserable for many years. A late evening run back to Oudenaarde is required to get our last opinion of the day; Michael Morkov of Denmark is down from Aarhus to ride Sunday’s Espoir’s Ronde over 165 kilometres with his GLS continental team. He tells us about his troubled world track world championships and then we ask his predictions for Liege; ‘It will be CSC for sure, if not Karsten Kroon then Frank Schleck.’