Yesterday, Paolo Bettini admitted to entertaining thoughts of quitting bike racing following the death of his brother, Sauro. He continued only because he felt that Sauro would want him to do his jersey justice and win, and today, there was nothing stopping little Paolo Bettini. It seems that most days that Bettini wants to win, Bettini wins, but when Bettini has a true mission with help on his shoulders – it’s a done deal.

Indeed, after reading Bettini’s comments on PEZ yesterday, there was little to do but hope for the fairy tale finish in Como Saturday afternoon. And for once, it happened. The at once maddeningly exciting finish was terribly sad, as Bettini broke into tears across the finish line and sorrow mixed with joy and Bettini hugged his wife and his brother’s children, and some other people finished behind Bettini, but all that anyone saw was Bettini. 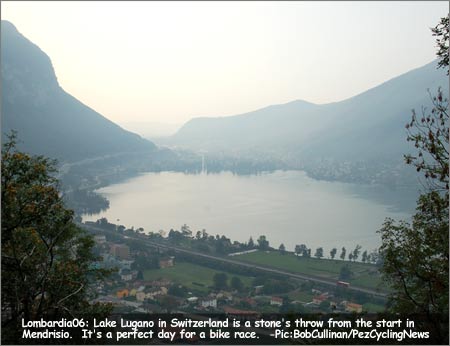 The Start Line
The race began about six and a half hours earlier under partly cloudy skies and a rather balmy 18C (well, for October). There were a few surprises on the starting line – first Alejandro Valverde’s presence. Valverde and his Illes Balears team had threatened the day before not to start because there would not be a ProTour awards ceremony at the end of the race on Saturday, but in the end, Valverde and his team relented and the two white jerseys mingled: Bettini as World Champ and Valverde as ProTour Champion. 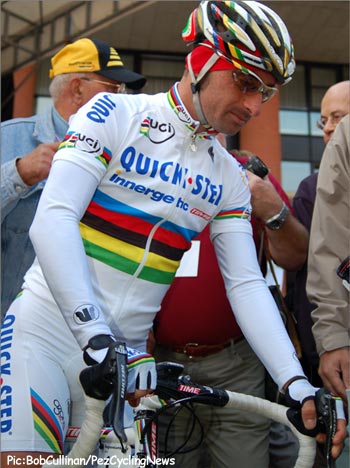 Paulo rolled up ready to race at the start in Mendrisio.

Ivan Basso was not at the start, which was not all that surprising, but still, there was some baited breath as some wondered if he’d make a completely surprise start. Alas, no Basso – but he will be participating in a 2-Up TT tomorrow in Italy. 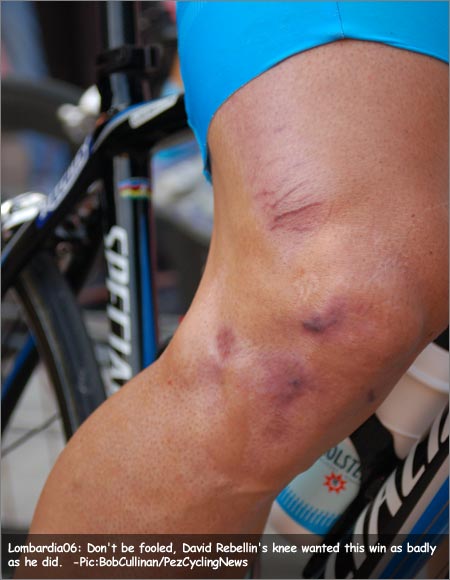 On To The Racing
There was some good attacking early on with Thierry Marichal taking the honors as the first attacker, but it wouldn’t be until 80k into the race that an acceptable break formed: Andrea Pagoto (Panaria), Georg Totschnig (Gerolsteiner), Diego Caccia, and James Perry (both Barloworld). This group quickly gained big time, and in approximately 80 km (165 down, 80 to go) put 10 minutes into the field. 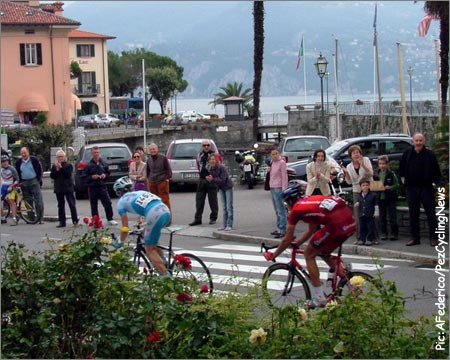 Totschnig and Caccia race through Mennagio with 68km to go. 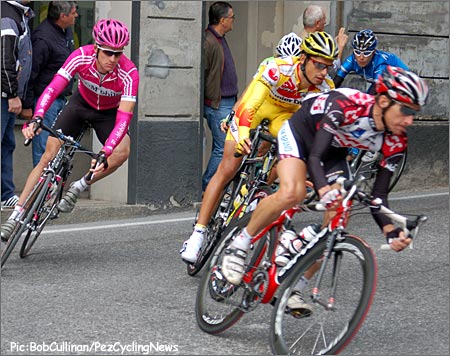 Michael Rogers navigates a tricky corner in the town of Mennagio.

Behind, Milram and Rabobank began taking up the pace-setting and just as fast as the break’s gap went up, it began to plummet – with all signs pointing to a capture on the slopes of the majestic Ghisallo climb which ends with about 44k to go. In incredible fashion, the pace behind in the chasing field ratcheted up to somewhere around 800mph and in the span of about 30k, the gap to the break went down to around 4 minutes with the big stars on the front as the field ran headlong into the first mean slopes of the Ghisallo. 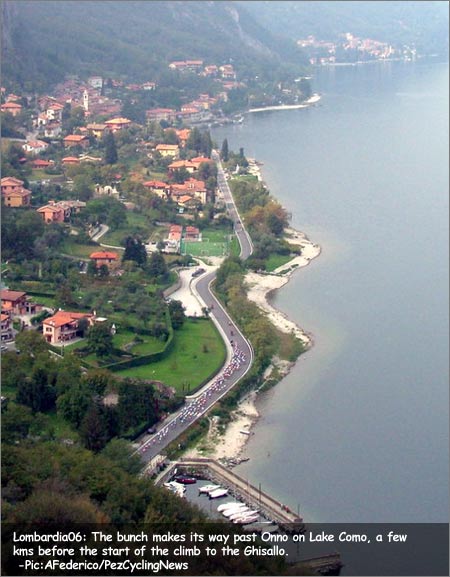 The Ghisallo
Boogerd, Bettini, DiLuca, every big name was represented at the front and it was Bettini who made a pummeling move and leapt off the front early on and started slashing away at the break’s gap whilst destroying the field behind him. 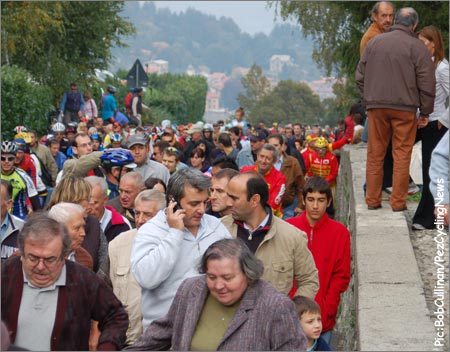 The crowds atop the Ghisallo were… huge.

Eventually an all-star group came across with Bettini on the ‘easier’ upper slopes of the climb: Schleck, Ricco, Boogerd, and ALL of our PEZ picks for the win: Rebellin, Di Luca and Sammy Sanchez. 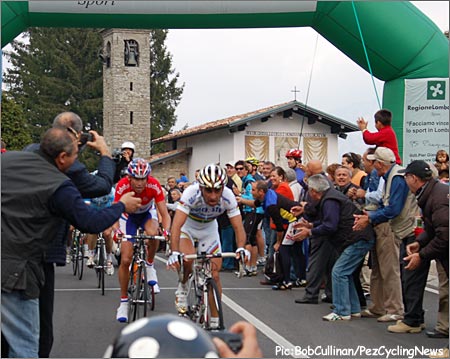 Bettini leads over top of the Ghisallo – it was a madhouse up there!

Gaining new companions in his march to the finish did little for Bettini, as he continued setting a maddening pace up the climb. Bettini managed to dispatch both Sammy Sanchez and Riccardo Ricco over the top of the climb, but they along with a few others came back to the leaders with about 30k to go to form a lead group of 12, from which the winner would emerge: three Gerolsteiners – Rebellin, Wegmann, and Totschnig, Bettini, Schleck, Boogerd, Di Luca, Ricco, Sanchez, Pagoto, Moreni, and Carrara. 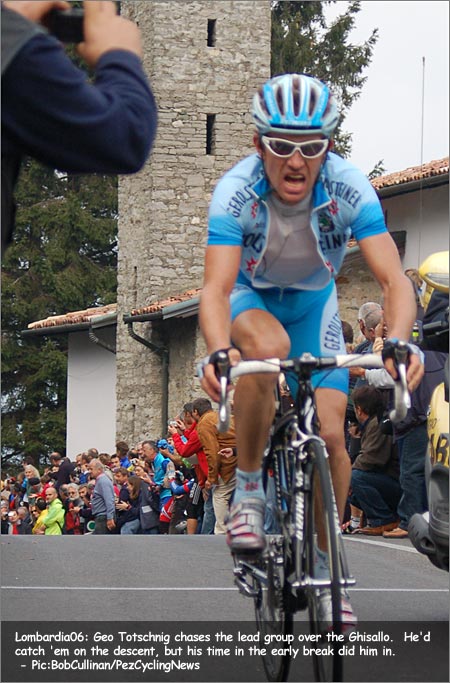 Two Climbs To Go
With 20k to go, two climbs remained – the Civiglio and the short, steep, of course hard, San Fermo climb finishing less than 6k from the finish in Como. As the climb to the Civiglio started, Totschnig set a quality tempo for his two Gerolsteiner teammates. Then Totschnig bids adieu, leaving Bettini out front to set a fierce tempo. Then, somehow, Danilo Di Luca attacks after looking like hell incarnate the whole day, but Bettini put a quick end to his move and countered it in particularly vicious fashion and put an end to the business right there. Bettini got gone. 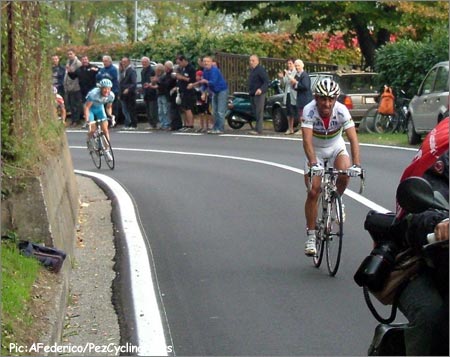 On the Civiglio climb, Bettini pops the top on another can ‘o whoop-ass.

Bettini was all over the place over the final part of the climb and onto the descent. He nearly wrecked at least half a dozen times, but still, there was one that managed to keep the driven rider within arm’s reach: Fabian Wegmann. Wegmann somehow managed to come across to Bettini with about 9k to go – the two had a gap of a little under half a minute to a chasing group of six.

The final climb of the San Fermo starts and Bettini lets it be known how this will end – part-way up the climb Bettini says ciao and Wegmann is left twitching and convulsing behind. Bettini crests the top of the climb with about 5k to the finish with a decent enough gap and gets down the business of going psycho in downhill fashion, which he does to great effect. 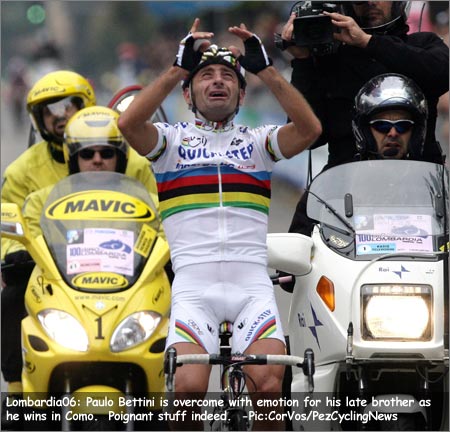 The Finish
Wegmann chased Bettini admirably to the finish, but there was to be no catching little Bettini today – he came across all by himself to win his second Lombardia in succession by about 10 seconds. Wegmann was caught by Sammy Sanchez with around 2k to go, and Sanchez had Wegmann’s number for the sprint. 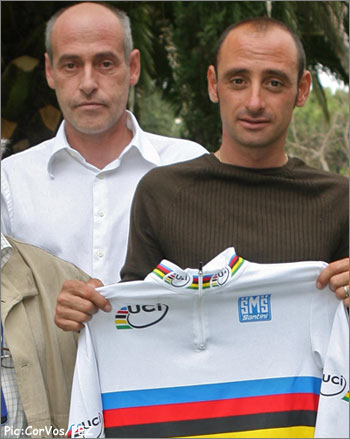 Again though, I wonder if anyone was watching as Bettini cried his heart out at the finish with his wife and his brother Sauro’s children.

Chasing Lombardia: The Day With PEZ