Friday the 13th unlucky for some, but not so much for PEZ-Man Bob Cullinan who spent the day riding over the Giro di Lombardia corsa around Lake Como in northern Italy. He also sent us some photos of the day… thanks a lot Bob… lucky s.o.b.

It’s a tough gig, but somebody’s gottas do it. Bob stepped up and hopped on a plance from San Francisco Wednesday, and will return home Sunday – talk abotu your whirlwind trip. Then again, let’s see a show of hands out there: who would NOT want to go to Giro di Lombardia for the weekend?

Yeah, that’s what I figured…

– Bob picks up the story…

Damn, it’s been a GREAT day!

I found the local bike shop (major props to them!) and hooked myself up with a pretty sweet Bianchi – Campy groupo, 39-52 front, 11-28 nine speed rear. 40 euros for the weekend. Not too bad. 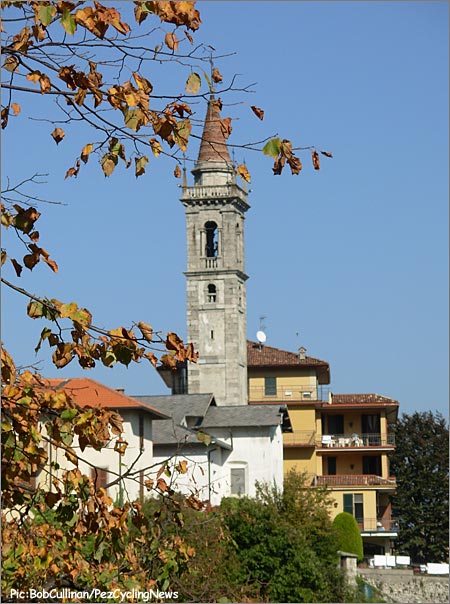 Ho hum… another storybook church spire in Italy… about 2km from the top of the Ghisallo.

So I headed to Ghisallo, on an absolutely picture-perfect day. I’ll spare you a lot of the details, but as you know, the ride up from Bellagio is a BITCH …especially with just a double, and my wrecked knees. But, I made it…no problem. And along the way, I ran into a whole cast of characters…more than enough to liven up my piece on the ride [Coming next week – ed.]. 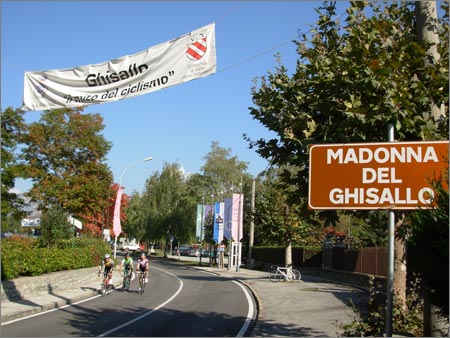 You meet all kinds on a Friday ride in Italy – like these three German amateur riders under the banner at the top of the Ghisallo climb.

I’ve attached a couple of shots from the route and from the top of Ghisallo. The museum is not open yet…they were FRANTIC trying get everything done in time for the race tomorrow…they should make it, but in typical Italian style, it will go right down to the wire…along with a lot of other things! 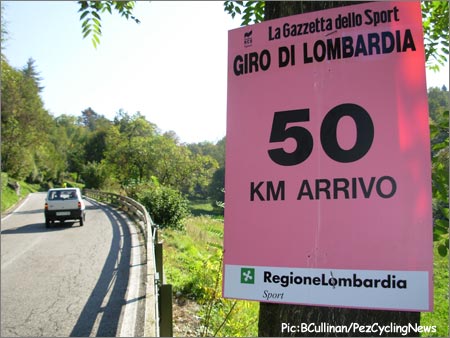 50km to go for the giro, about halfway up the climb from Bellagio to Ghisallo. 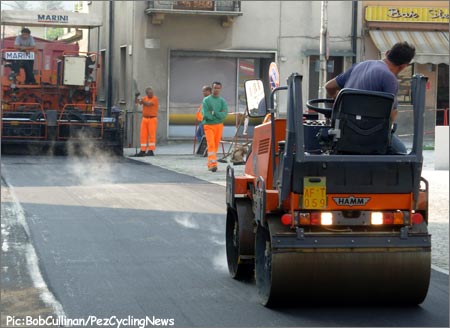 On the descent from the Ghisallo, at Albavilla, about 22km from the finish, they were still working on the road today at 4pm!!! One day to go… no sweat for these guys. 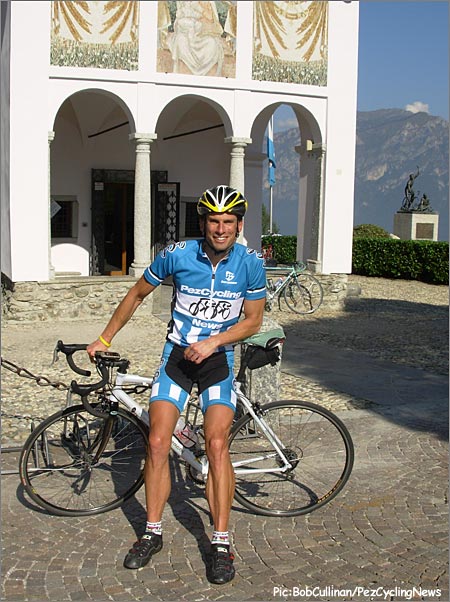 Livin’ Large: Bob strikes the obligatory “look at me… suckerrrrrs!’ pose on a sunny Friday at the Madonna del Ghisallo.

Keep it tuned to PEZ!