Boonen, Petacchi and Hushovd were at the top of Unibet.com’s list. Friere or even Zabel had a look in. The usual suspects all lined up for the start of the 2006 Milano-SanRemo with the backing of cycling’s pundits and fans. However, nearly 300km is a long way and a lot can happen out on the road… 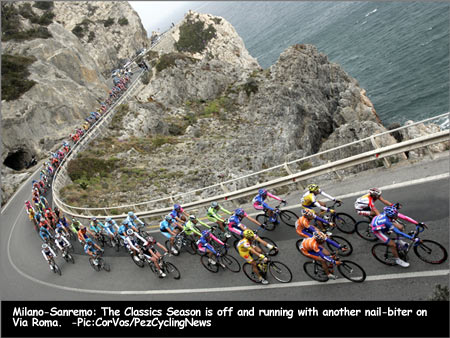 A long day in the saddle is like a red rag to a bull for some cyclists and after approximately 30km a hardy group of eight such racers who are undoubtedly wired up a different way escaped from the peloton. The relatively unknown group of Daniele Contrini (LPR), Unai Etxebarria (Euskaltel), Staf Scheirlinckx (Cofidis), Ludovic Auger (Franзaise des Jeux), Kjell Carlstrцm (Liquigas), Mirko Allegrini and Sergiy Matveyev (Panaria), and Giampaolo Cheula (Barloworld) were allowed to ply their trade in front of the cameras in what turned out to be a 236km team time trial. 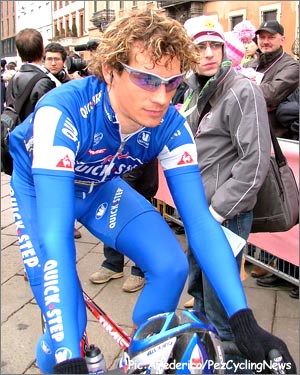 Whilst this bunch amassed a maximum lead of 11’30 the remaining pack pedalled through the first 194km at a very respectable 45km/hr. These first four hours were not marked by any significant action as the course took the race on its Southerly journey to the coast at SanRemo. The day had dawned relatively bright and warm and the early spring day reduced the stress on the riders before the real competition began. 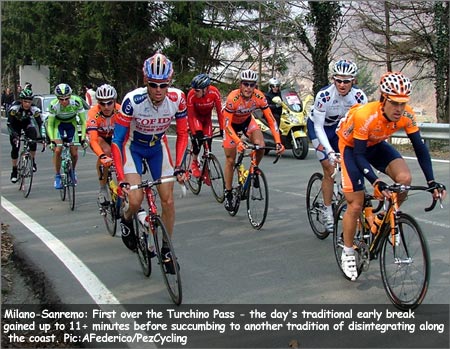 Let The Capi Begin
Soon after the riders entered the final 100km the course moved into the area known as ‘The Capi’ which is marked by a number of short climbs in succession. At this point, the 8 leader’s advantage began to be whittled down with only 5’30” remaining with 71km to the finish. The best known of these climbs is the Capo Mele, 52km from SanRemo but by this point in the race, the escape’s margin over the chasing peloton had diminished to just over 2 minutes. Entering the final 40km this was eroded further and by the time the now fatigued breakaway began to climb the Capo Berta the lead was under the 2 minute mark. 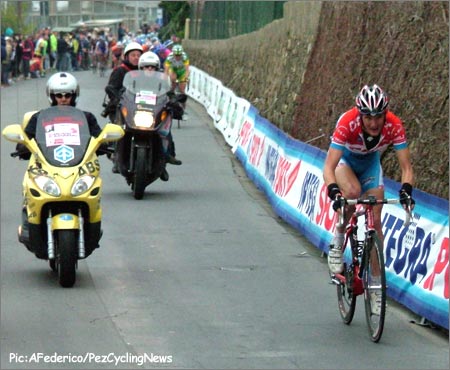 CSC’s Frank Schleck does his Luxemburger’s champ’s jersey proud with a bid on the Poggio.

Allegrini and Etxebarria reached the summit first and broke away on the descent gaining 15 seconds over their fellow escapees. However, their bid for victory was short lived as the peloton regrouped by the time the race had hit the Cipressa in the final 30km. 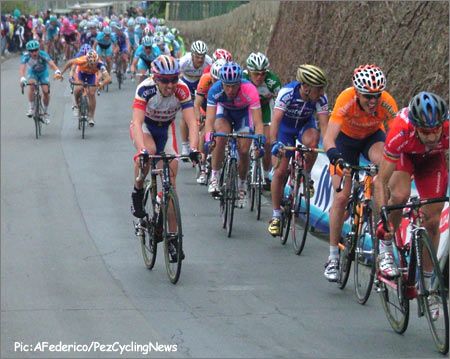 The pack is strungout on the Poggio… but what’s that business with Freire back there…?

At this point in the race with only the famed Poggio remaining the big guns began to fire. On the slopes of the Cipressa Stefano Garzelli attacked, attempting to gain an advantage before the descent but he was caught and countered by Gerolsteiner’s Peter Wrolich who was also unsuccessful in his endeavour. As the peloton raced to the foot of the Poggio, the blue Quick Step jerseys congealed on the front of the pack to control the pace.

As the road began to slither up the Poggio a foray of attacks saw a number of riders break clear. The new split group snaked up the climb and in the lead Alssandro Ballan dug deep to accelerate away with Filippo Pozzato on his wheel representing a back up for Quickstep should the split hold their lead to the finish. CSC’s Frank Schleck couldn’t quite match the pace but Igor Astaloa joined the pursuit along with Samuel Sanchez and Acqua e Sapone’s Rinaldo Nocentini. On the descent of the Poggio and the final run into the finish the six leaders regrouped with 5km remaining. Petacchi and Zabel’s Milram team drove the peloton in hot pursuit with around a 10 second deficit on the leaders. 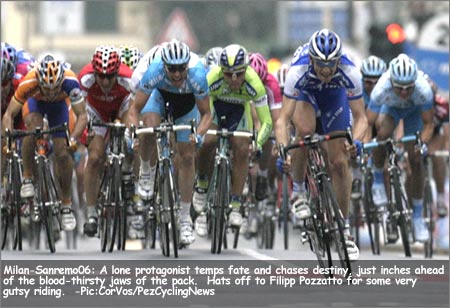 In the final kilometres the escape was rapidly reeled in and under the red kite it was clear that their struggle was doomed. However, just before the group was reabsorbed in the final 300m Quickstep’s wild card Filippo Pozzato burst clear and gritted his teeth for an all or nothing dash to the line. Miraculously, his effort was rewarded as he just held off Alexandra Petacchi and Luca Paolini to win the 97th Milano-SanRemo and complete the 34th Italian clean sweep of the podium. Tom Boonen celebrated his team mates win taking fourth. For Pozzato, after his win in the 2004 Tirreno-Adriatico this is the 24 year old’s greatest victory. 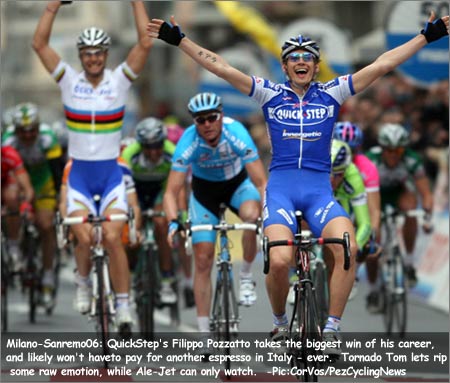 Commonwealth Games: Inside With Evan

Oliphant Down Under: Commonwealth Games 2