The Tour de Langkawi rolled out in the tropical heat of Malaysia today, and we’re stoked to have a man on the inside – Team Navigator’s Burke Swindlehurst will be reporting in as internet connections allow… His meeting with a pesky pachyderm seemed a fortuitous start.

Hey there Pez readers!
Burke Swindlehurst of the Navigators Insurance Cycling Team here. I’ve been asked to give all of you an inside look into the 11th edition of the Tour de Langkawi from a rider’s perspective. That being said, the first thing I have to mention is the heat down here. It’s hot and very humid. Picture riding your trainer in a Jacuzzi and you might get a sense of it. Coming from the brisk and dry air of Salt Lake City (where my last ride was in a snowstorm) to this is, well, a change. 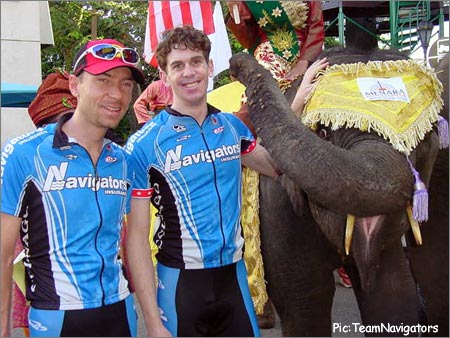 Another interesting thing about the Tour De Langkawi is that I reckon it’s probably one of the only races where you might find yourself contemplating the likelyhood of an elephant stampede while on the start line. This fella was getting pretty friendly with me and my teammate Mark Walters. It would appear that Elephants are no different than dogs in that they use their noses to check things out. Lucky for Mark, he didn’t check all the usual places a K-9 might!

But, back to the race. In our team meeting the night previous we talked about the possibility of a “freak” break rolling away on this short stage and getting time on the field. As it turns out, just that happened. We fared well and placed both Mark and our G.C. Man Cesar Grajales in a break of 24 that would eventually take over 7 minutes out of the rest of the field. There were a few “hitters” that made the split, including last year’s winner Ryan Cox, but more than a few missed it and it’s quite strange to think a 10 day stage race has already been pared down to a select few. I have a feeling there are some more strange scenarios yet to play out over the coming days. 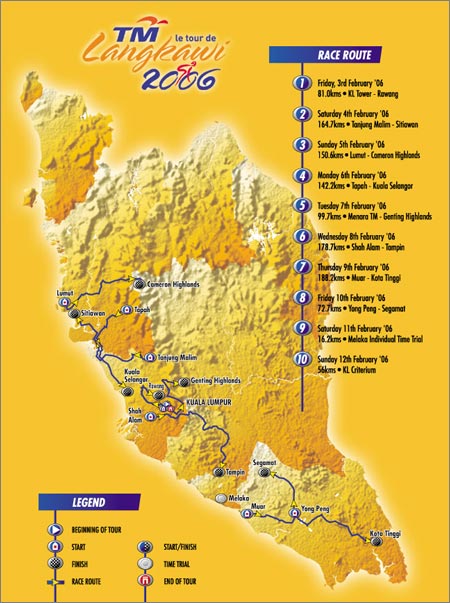 As for me, I had a quiet day in the peloton, adjusting to the heat, a new bike and just getting a feel for the speed of racing again.

What else…hmmm. Oh, this country is absolutely beautiful. It sits on the equator and has feel similar to Hawaii in both vegetation and climate, as well as a distinct mix of Asian and Middle Eastern culture.

Oh, and the fruit kicks ass. [ed note: good thing he didn’t misplace the plural there…] I’m trying for a world record in Papaya consumption at one sitting. I’ll be sure to let you know how that goes. 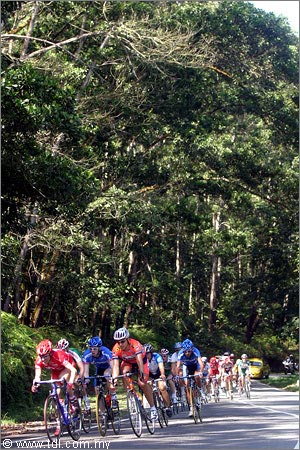 Lots of trees and tropical rain forests make for some ‘jacuzzi-like’ racing.

Tomorrow is a relatively flat stage at just over 90 miles. I’m expecting more heat, sweat and resulting stank. I’m hoping to keep these updates fairly frequent, but as we travel to more remote locations the internet access may be limited. That, and I may not have the strength to form letters after races. Let’s hope for the best.

Till next time,
Your intrepid reporter
Burke