The ‘Race To The Snow’ or ‘Sun’ whichever you prefer, has seen a continued domination via Tom Boonen in the sprinters’ stages and Floyd Landis when it really counts. This year’s race has been anything but boring with constant attacking, reshuffling, and even more attacking. With only two days remaining, the 2006 Paris-Nice is Floyd’s to lose.

Yesterday’s stage was once again a sprinters stage, and once again Tom “Tornado” Boonen blew through the peloton to take the win, with Alan Davis hot on his heels. During the 193 km stage from Saint-Etienne to Rasteau there were no huge mountains, outside the cat 1 Col de la Rйpublique in the opening 12.5 Km which shook things up just a little, and no wind, meaning a bunch finish was in order. 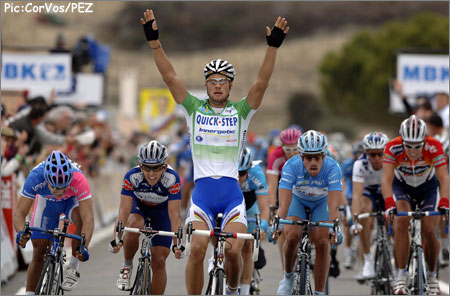 Tom Boonen has reigned with an iron fist over the bunch gallops so far: 3 wins, 3 tries.

However, that didn’t stop the hopefuls from attacking, as sometimes it works out. Renaud Dion of AG2R took his turn out front, and was stopped by protesters. He didn’t pull a Badger and hit any of them, and was shortly again on his way. After he was caught, Йric Leblacher of Franзaise des Jeux, and Bas Giling from T-Mobile gave it a shot, staying away for around 100km, but they too were eventually caught. After the dust had settled on the sprint, the GC was announced with no major changes. 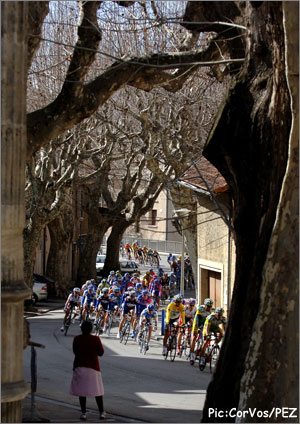 It’s not all mean and nasty weather at Paris-Nice; Southern France isn’t all THAT bad.

Avignon to Dinge-les-Bains (famous for its lavender festival) was today’s run, for a total of 201.5km, the longest stage of this years Paris-Nice. The weather in Avignon was the best it had been thus far, yet still cold. 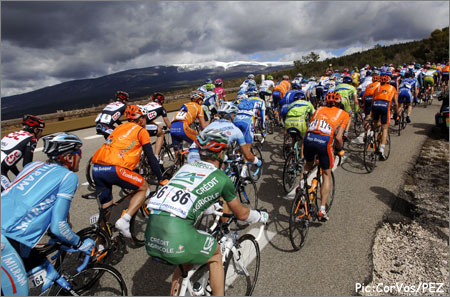 The field received a number of sinus cleansing climbs today – word to the weary, there is much more fun to come in the next two stages.

Several attacks came during the early part of the stage, 2 were off Casar (FDJ) then Crosbie (Agritubel), then they were drawn back, then four more peeled away; Francis Mourey (FD Jeux), Alberto Contador (Liberty Seguros), David Moncoutie (Cofidis) and Joaquim Rodriguez (Caisse d’Epargne-Illes Balears). 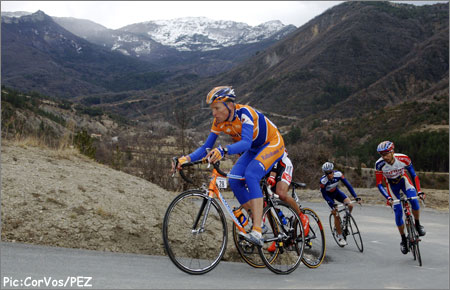 A quality break, with some solid climbers provided the springboard for Joaquin Rodriguez… 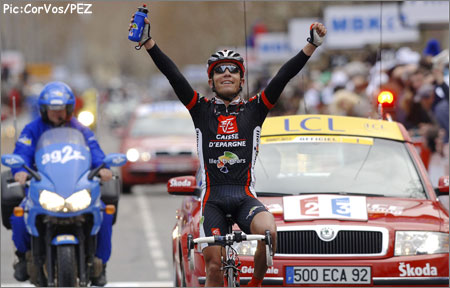 …To take his second career Paris-Nice stage victory, which he enjoyed with a lovely swig of sport drink.

Posthuma went, leaving them all behind. Then Rodriguez managed to get over to him with 20km to go, and then kept going. By then, Contador and Moncoutiй joined Posthuma and they chased together. But Rodriguez, who has a previous Paris-Nice stage to his name, managed to win the day, celebrating upon his arrival. Posthuma and Pineau took second and third, and Floyd kept his yellow.