The Queen of the Classics crowned a new King today as CSC’s Fabian Cancellara assumed the throne on an epic day on the cobbles of northern France, that was full of surprises, luck, and great racing…

– Note: For the first time, North American fans were treated to full on live coverage of the race streamed over the internet by Cycling.TV – very cool. 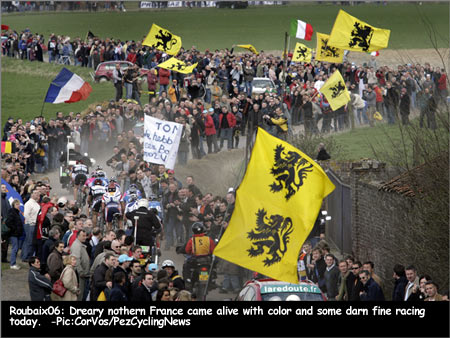 The 2006 Paris – Roubaix was defined by a ‘good news / bad news’ day for North American bicycle manufacturers; the good news was that big Swiss time tester Fabian Cancellara hammered his Cervelo to glory for CSC. He became the first Swiss rider to win the race since Henri Suter in 1923 and the first Swiss to make the podium since Thomas Wegmuller in 1988. The bad news was that a crash caused by a mechanical failure to favourite, big George Hincapie’s (USA & Discovery) Trek was responsible for his retirement when in a tactically strong position with two team mates in the lead group whilst ‘Tornado’ Tom Boonen (Belgium) was isolated with not another Quickstep team rider in sight. 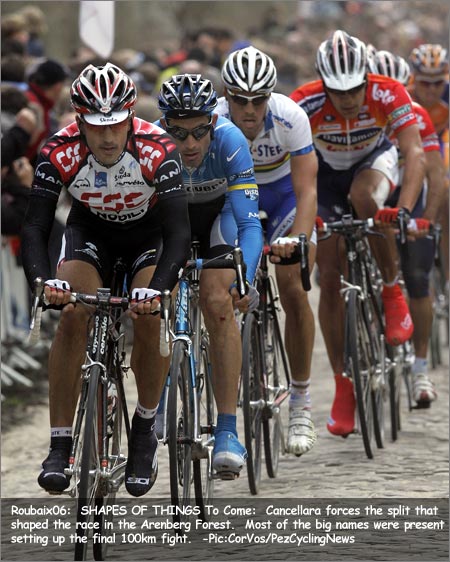 The race started for real on the pave of the legendary Arenberg Forest at 163 kilometres when an early break of four was caught with a rampant Cancellara already on the front, driving. Exiting the forest a group of some 14 riders was clear and it was ‘game over’ for the rest of the race, all the favourites were there with the exception of Gent – Wevelgem winner, Thor Hushovd (Norway & CA) who had punctured at the wrong time. Peter Van Petegem (Belgium & Lotto), Tom Boonen (Belgium & Quickstep), Juan Antonio Flecha (Spain & Rabobank), Allesandro Ballan (Italy & Lampre) plus Cancellara and the doomed Hincapie were all there.

The big surprise though was that whilst ‘De Peet’ had compatriot Gert Steegmans; Cancellara had Danish strong man Lars Michaelson and Hincapie had Leif Hoste (Belgium) and Vladimir Gousev (Russia) – hot favourite Tom Boonen was on his own. Not one Quickstep survived the Arenberg purge and despite a massed blue and white charge at the front of the bunch they could not bridge-up to help the boss. Boonen never appeared to panic but could be seen looking back and speaking into his radio, a rare tactical disaster by the flooring guys then.

The leaders’ gap grew steadily and it was obvious that the winner was going to come from one of the 14 at the front. 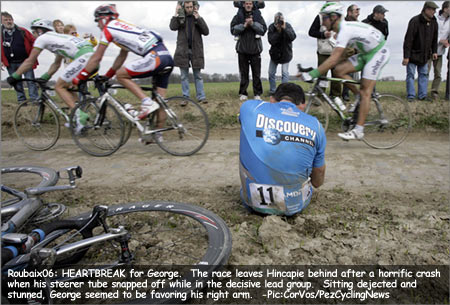 The second defining moment of the race came on the cobbles at Merignies, where in a blink Hincapie was on the deck, a re-run on slow-mo showed the cause as his stem/bars parting company with the rest of the velo, no doubt it will be the subject of much analysis but it looked very much like the steerer on the Trek had sheered. Whatever the cause, Hincapie was down, out and hurting, looking stunned as he sat among the dust at the road side.

If there was any doubt that Boonen rated the big American as a danger it was soon dispelled by the huge attack the world champion launched to ensure that there would be no coming back for George. Boonen’s acceleration, aided and abetted by De Peet, Cancellara and Ballan split the group and on the cobbles at Cysoing, Boonen showed why he was riding at the front as Ballan and Gusev hit the deck – both made it back, Ballan with disarming ease.

The third and final key moment in the race came on the cobbles at Camphin-en-Pevele with around 20 kilometres to go when the burly Swiss Cancellara turned on the power, with only the gutsy Gusev able to respond and that was only a temporary. It was becoming apparent that Boonen wasn’t ‘special’ today and he couldn’t respond when Hoste and De Peet went, they caught Gousev on the way. 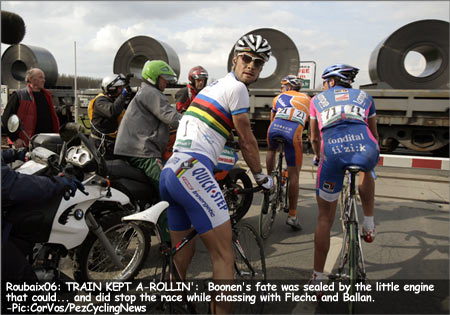 It was to be an Australian pursuit race to the finish with Cancellara; then De Peet, Hoste and Gousev; then Boonen, Ballan and Flecha.

In the closing kilometres De Peet and co. slipped through an un-manned level crossing just before a train hurtled through despite the best efforts of race officials to stop them. As the Boonen group arrived at the crossing, any similar thoughts they had were dispelled by several hundred tons of steel whistling past. The incident had no effect on the race out-come, or so we thought.

Cancellara was full of riding in the finale, his long back flat, parallel with the top tube, big thighs pumping out the rhythm. On the legendary Roubaix velodrome he made the most of his moment of glory with the full gamut of victory gestures.

The sprint for second place 1 min. 23 sec. later wasn’t the fastest, but after 6 hours over the cobbles it’s perhaps not surprising – Hoste got round De Peet with Gusev fourth. Boonen showed how it should be done half a minute later as he threatened to tear the tyres of the rims in beating Ballan and Flecha for the places of honour. 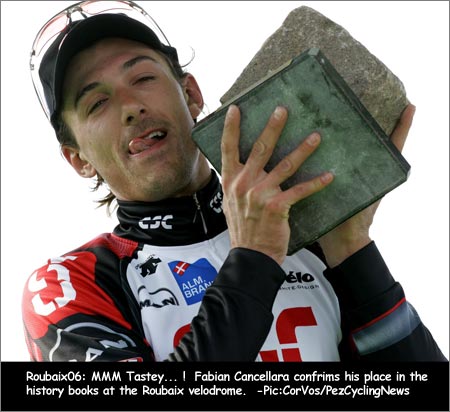 But this great race held even more drama – De Peet and the Disco boys were DQ-ed for jumping the barriers, so Boonen goes second to stretch his Pro Tour lead, Ballan gets a podium, (he’s a man for the future) and Flecha gets fourth (could have been better with a bit less aggression and a bit more thought).

Haven’t the classics been great so far? Stay tuned for more from Northern France as the PEZ Crew ain’t done yet…!