This is it – last night, three teams on equal laps with two teams with legitimate shots at the win. Politics won’t govern this outcome – it’s a night for pure racing with the intermediate sprints paramount. Ed Hood calls the story from the sidelines as always.

It’s 01.45 am on Wednesday and we’re lost in what was East Berlin, I have the laptop on my knee, the sat-nav is having a bad turn and so is Kris, Ivan is in a catatonic state in the back of the camper, he was up at 05.30 am yesterday and hasn’t had a wink of sleep. Who the hell is Ivan? I can hear you ask; he’s our reinforcements for Copenhagen where we have eight riders. But what about Berlin, what happened? 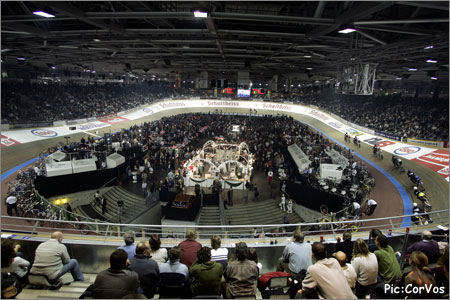 It was another capacity crowd on the final night – and they got every penny out of it.

The Final Chase
The big chase started at 11.00 pm, it was neutralised at half distance because of a liquid spillage on the track but the last 15 minutes or so was the best racing we saw all week.

Four sprints out and three teams are on the zero lap, but forget home boys Fulst & Lampater with their low points total, this race is between Dutchmen Robert Slippens & Danny Stam and Italian, Marco Villa partnered with our own Swiss flyer – Franco Marvulli. Slippens takes the sprint to go level on points with Franco & Marco at 195.

Fulst attacks right after the sprint – it’s a good move – they are way back on points and can only win if they take a lap, but Slippens and Franco give it full gas; Stam comes in, his cheeks puffed out and it’s for real, then Franco is on the front, Lampater blows – looks like third place guys, but a sound effort.

Three Sprints To Go
Three sprints out now and Franco pips Slippens – 205 to Marvellous & Co and 201 for the black-clad Orangemen. Bartko counters off this sprint but it’s pointless, they are a lap down and Aldag has never been great during the whole six – but maybe they want a podium place, Kappes hauls them back anyway. ‘Alfred Hitchcock couldn’t direct a better thriller,’ the speaker tells us.

The Final Laps
The second last sprint and it’s Bob first over the line, both teams on 211, all down to the last sprint, whoever crosses the line first at midnight, wins. I can’t write fairy stories, especially not on the Berlin ring-road in the wee small hours so unfortunately little Bob Slippens disproves the theory that a good big ‘un will always beat a good little ‘un. It’s another second place for our big ‘un Franco then, with Fulst & Lampater third. 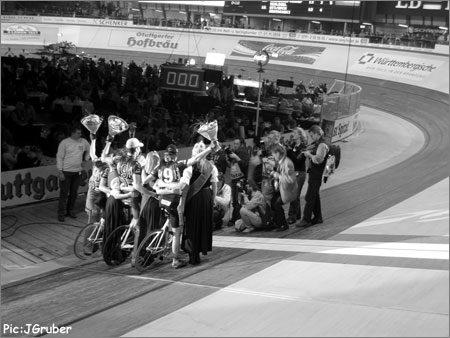 Eating, Packing, And Re-Supplying
Our day started much earlier though, we were first in for breakfast, largely due to our ability to resist the temptation of an endless supply of free beer. Immediately after breakfast we started to break camp, all the stuff we wouldn’t need again in this six; micro-wave, spin drier, food boxes and all the odds and ends. Then it was off to the ‘Plus’ supermarket to stock-up on mineral water, Fanta and Coke – 24 big bottles of each, it’s much cheaper to buy these in Berlin than it is in Copenhagen. Ivan arrived in time for dinner and couldn’t believe the chaotic system – thank goodness that was the last time.

Down to the track and the presentations before Lausberg wiped the track with everyone again in the sprinter’s six flying lap.

Franco and Marco rattled off a middle 57 in the flying kilometre but our young Danes, Alex Rasmussen & Michael Morkov brought home the bacon with a low 57 [bacon? Danish? Sorry, it’s late] 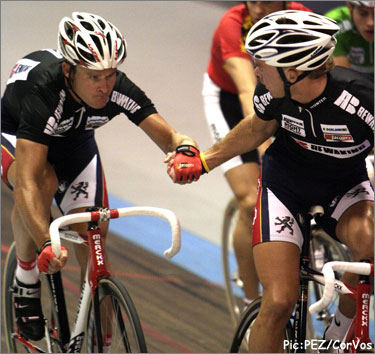 Iljo Keisse (right) is quite young, so perhaps his hot-headedness can be excused to a degree.

Public Tongue-Lashings, Not So Pro
Iljo Keisse’s mechanic slipped-up and fitted the wrong sprocket to the young Belgian star’s Eddy Merckx track machine for this race; the public tongue-lashing Keisse dished out wasn’t dignified, but then I’m just a runner, my opinion isn’t worth anything in this world.

Frank Zander was the ‘show time’, I thought hard about a sentence to do the man justice, this is it – Frank Zander dredged the sludge from the deepest sump of Euro-metal pop with his set – he was GRIM, but the crowd loved it. Franco wasn’t himself before the last chase, quiet and introverted, not his usual ebullient self – thinking about what had to be done no doubt. 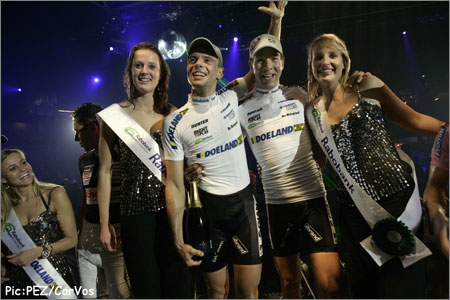 It Might Not Have Been For The Win, But…
For Alex and Michael it was the biggest chase of their life and they were a tad edgy – in the event they needn’t have worried, they passed their examination without any problems. Kris doesn’t give praise easily but he reckons there are the makings of a great rider in young Morkov.

For Jozef & Martin it was just another day at the office. We have to mention little Marco Villa here too, strong, fast, consistent and just damn cool – respect Marco. 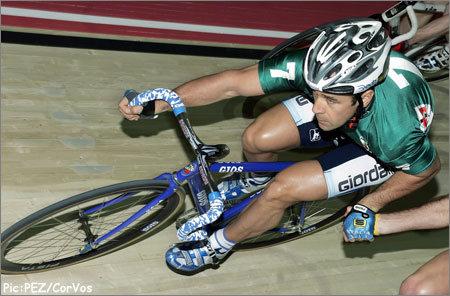 There’s a reason Marco Villa has been doing the Six Day circuit for longer than some of the riders on the circuit have been alive.

Parting Thoughts
As we head for Rostock and the ferry across the Baltic to Denmark, Kris and I had a last think about Berlin, a magnificent spectacle and a sell-out success, with great racing in places, BUT the chases weren’t the best, why?

· The season’s end is approaching, motivation is slipping.
· Aldag wasn’t himself he patently had not recovered from his appendix operation.
· Bartko, Fulst and Lampater’s Stuttgart six win still rested heavy in their legs.
· A key ingredient of the sixes is missing – Bruno Risi, a man with speed and charisma aplenty.

Any way, what do we know about Six Day races? Talk to you from Copenhagen – if the sat-nav stays fixed.