What do you get when you cross some of the best Aussie pro riders racing in memorial of a lost mate, big prize money, a hot summer’s day and tight racing around an Oceanside beach resort? The Salt Resort Darren Smith Memorial of course and this year was one of the fastest and hardest races ever.

The race has been held in Australia since 1994 in memory of the late Darren Smith, a former Australian Olympian who was tragically killed whilst out training almost 14 years ago. Darren was an inspiration, team mate and friend to many of the biggest names amongst Australian cycling including top pro riders, Robbie McEwen, Nick Gates, Jason Phillips and Henk Vogels who all raced in the event this year in honor of their mate.

Obvious favorite for the event was Darren Smith’s best mate at the time of the accident and now cycling superstar, Robbie McEwen. Robbie interrupted his end of season break solely to race the memorial event and he took a few minutes before the start to chat with Pez about the event and the memory of his friend. 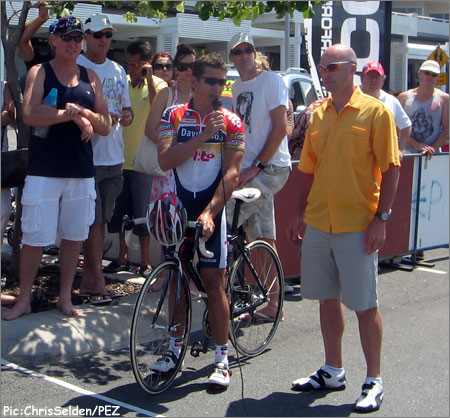 Robbie was on form today off the bike entertaining the crowd, but was suffering a little with sickness on the bike. Look for him next week at the Australian Criterium Championships to be covered fully on PEZ.

PEZ Chats With Robbie Mac
PEZ: Darren was an inspiration to many, including myself, as I used to watch him take it to the international stars back in the Bank Classic (famous Aussie stage race of the 80s & 90s). How does it feel to be racing here today in memorial of your mate?

PEZ: The event has changed a bit over the years, we’ve seen a few different guises (road race some years, criterium others) – it’s good to see the event still going well for Darren’s memory. 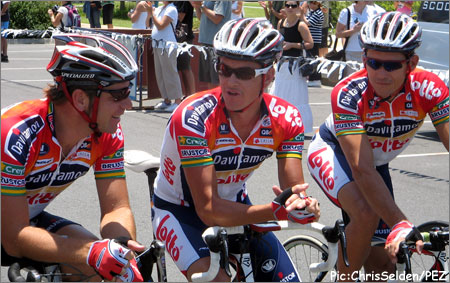 The three ProTour riders in the event, Henk Vogels, Nick Gates and Robbie McEwen discuss the race before the start.

MCEWEN: It is good to see. A new sponsor and new location again and it’s been elevated from almost a club race, to now a high scale event which it deserves to be…I see heaps of blokes here today, all the locals will be really motivated. It looks like a good field and some of the guys are going really well.

PEZ: Speaking of that, who’s your pick for the win today?

MCEWEN: My two picks today are Jason Phillips and Jon Cantwell. Just on fitness I think Jason Phillips would have to be the favorite at the moment, but he wouldn’t want anyone too quick with him at the finish. Whatever the case, I think the race is going to split to pieces.

PEZ: Are you seriously discounting yourself from favouritism here?

MCEWEN: Yeah mate, I’ve been back on the bike about 5 or 6 rides and I’m sick with sinusitis but I’m here just for the race for the memory today.

So with Robbie discounting himself, how would the race pan out? Would Robbie’s Davitamon-Lotto team-mates, Nick Gates and Henk Vogels find themselves going for the win, or would a local upstage the pros? 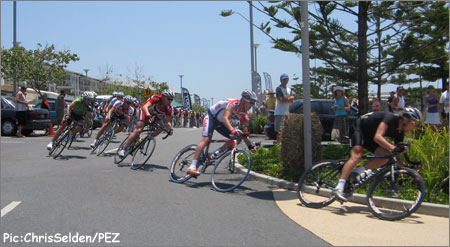 Jason Phillips doing his best Darth Vader impersonation in his 2XU black clothing as he pushes the pace early in the race with Nick Gates (Davitamon-Lotto) on his wheel.

One thing Robbie did predict was the breakup of the field and it happened very quickly as the twists, turns and high pace took a big toll on the field. German based pro, Jason Phillips riding in Australia for 2XU clothing, Toyota-United bound, Henk Vogels (Davitamon-Lotto) and five other top flight Aussies, powered off the front and before you know it the gap opened to what looked like an insurmountable lead.

Back in the pack everyone looked at each other, but with no one wanting to tow two of the fastest sprinters in Australia, in McEwen and Cantwell (Rumored to be Stateside bound for a pro team next year) back up to the leaders, the race looked over after 20 minutes.

The never say die attitude of some riders in the peloton surprised many though as with just over 25 minutes to go a group of 6 riders flew out of the pack in attempt to cross the huge gap. Most thought they were fighting a lost cause, but amongst those six were three notable riders in particular, Kane Oakley (DFL-Cyclingnews.com), Jon Cantwell (Teschner-Leggera) and local boy, Craig ‘Crackles’ Cahill (Anatomic).

Whether Jason Phillips up in the front seven saw these six coming or not is unclear, but with 20 minutes to go he attacked the front group he was in and attempted to take the title with a long solo ride. Most at the time thought he had gone too early, but Jason has been a pro for over a decade now and races 60-70 criteriums a year in Germany so he knows a thing or two about this style of racing. Also being a non sprinter, it was his only hope… 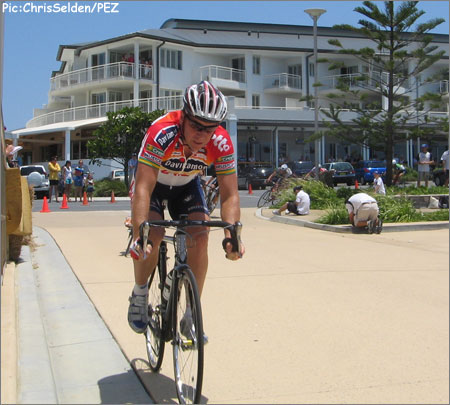 With the crowd which included Darren’s father cheering him on, Jason powered away to a very impressive solo victory that was much deserved. Meanwhile back in the pack, the six chasers had amazingly caught the front six and there was now a huge battle going on for the remaining big money on offer. With the 12 riders back together, Cantwell was always going to win the sprint and local boy Cahill knew it, so he attacked alone with 3k to go. The local crowd were cheering him on like crazy, but it was the super experienced Henk Vogels who saw the danger and launched his own solo attack catching Cahill with less than one km to go. Cahill just managed to hang onto 3rd and then, as expected Cantwell led the chase group home for 4th.

Jason Phillips, speaking to Pez after his win, “I felt great in the group and I could see a couple of the guys were struggling to ride the tempo that I wanted to ride so I went for it.” “Yeah, it was a long way, but I’m not a sprinter so I had to go for it early.”

Local boy, Craig Cahill on his last minute dash for glory, “Longest last three laps of my life!! 213 beats per minute across the finish line…”

All in all, a very tough race and a worthy memorial to a great Australian cyclist. The race itself ended being run at a record high pace – it’s certainly not everyday that Robbie McEwen gets lapped in a criterium anyway, which is a good indication of exactly how fast the thirteen riders out front were going.

Henk Vogels: Back In The USA