Paris – Tours, the sprinters’ classic, made for Mario Cipollini. The trouble was that he had been on the beach for three months by the time it came round so he never even saw the podium. The podium is also that rare thing – a Merckx-free zone. This is the only one of the ‘old’ classics in which Eddy did not make the stats. PEZ takes a look at this weekend’s Classic.

The race was first held in 1901 although there was an amateur event in 1896. Between 1974 and 1987 the race was run under a number of alternative guises; best known of these being Blois – Chaville.

Not exactly the hardest of profiles, but it doesn’t take much when the wind kicks up to make any race hard.

In 1988 it returned to the old name and format with the finishing charge down the seemingly endless Avenue de Grammont in Tours. Including the ‘alternative’ routes we make it edition 99.

This year’s Salzburg Worlds silver medallist, Erik Zabel (Germany & Milram) is one of the best-ever performers in the event. It seems like just a year or two ago that he burst-onto the pro scene with his first big win here; fresh-faced and grinning like a Cheshire cat. 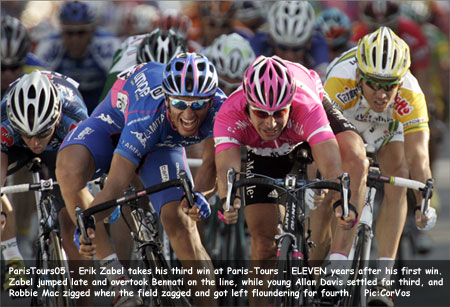 Not Just A Race For The Sprinters
Whilst some of the best fastmen of their respective generations have won the race – Rik Van Looy, Rik Van Linden and Freddy Maertens for Belgium plus Dutchmen Gerben Karstens and Jan Raas for example, there are some unlikely winners names on the trophy. Tour de France king of the mountains ‘record man’ Richard Virenque arrived at the line all alone in 2001 with a swarming bunch crawling all over their bikes just behind to try and nail him. 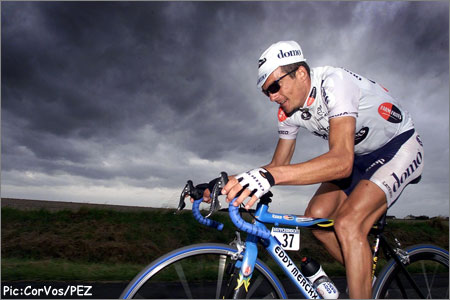 They don’t call him Tricky Dicky for nothing.

The handsome, talented but controversial Frenchman wagged an index finger in the air and hollered oaths to the heavens as he free-wheeled-in victorious – pro cycling as theatre at its best. And as recently as two years ago it was Erik Dekker (Holland) foiling the guys with the big thighs and fast twitch muscles. Before that, Marc Wauters took top honors in lone, solo fashion as well. 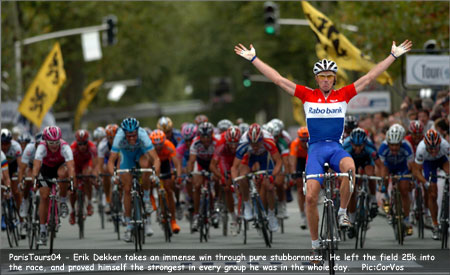 English Spoken Here
It hasn’t been a bad gig for the Anglos. Sean Kelly (Ireland) in 1984 and Phil Anderson (Australia) in 1986 both won during the Blois – Chaville period. The race suited the pair with Kelly lalso third twice, in 1985 behind Ludo Peeters (Belgium) and again in 1988 behind Peter Pieters (Holland). Anderson took second behind Rolf Sorensen (Denmark) in 1990. But way-back, in 1963 Tom Simpson (GB)) was second to Jo De Roo (Holland) and four years later Rik Van Looy (Belgium) narrowly out-dragged Simpson’s friend and countryman, Barry Hoban to win – more from Baz in a moment though. 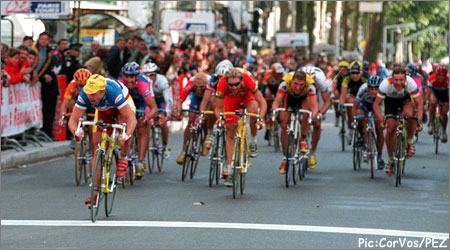 The Estonian hard rock, Jaan Kirsipuu, is a former winner on the Avenue de Grammont – he’ll call it a career after this Sunday’s edition.

Getting back closer to the present day, in 1997 when Andre Tchmil (then of Ukraine) won, there were two English-speakers on the podium with him; Max Sciandri (GB) in second place and Henk Vogels (Australia) third. The Aussies seem to like that spot, Stuey O’Grady occupied it in 2003 behind Zabel as did Allan Davis last year, again behind the man from Berlin. 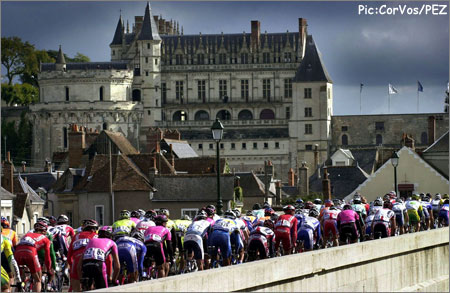 The scenery en route to Tours ain’t too difficult to deal with.

A Story Well Worth Reading
But let’s go back to 1965, when the organisers had a brain wave. Barry Hoban takes up the story; ‘Levitan, the organiser said “We must slow the race down and prevent all these sprint finishes. We’re banning derailleurs!” 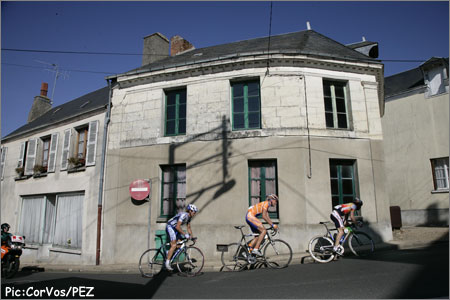 It ended-up the fastest Paris-Tours ever (45.029 kph for 246.8 kilometres, an average which was not beaten until Hendrik Redant won at 46.745 kph iin 1992). We were allowed a single ring and three sprockets, if you wanted to change gear you had to stop and move the chain across by hand. I rode 51 x 15 for the full distance, it was just so fast that you daren’t stop. 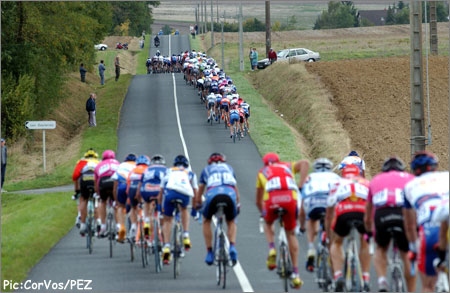 Can you imagine a scene like this with only one gear?

Karstens won, but he was well organised his whole team stopped together approaching the finale and chaged to the 13 sprocket. They team time trialled back and Karstens won the sprint on the big gear. One of the two years, (it was run with no shifters in ’65 & ’66) Anquetil decided he wasn’t going to mess around changing gears and would ride the full distance on 53 x 13. In those days the early kilometres were a bit lumpy and he ended-up struggling. His whole team had to stop so he could change down then they had to chase to get him back.’ 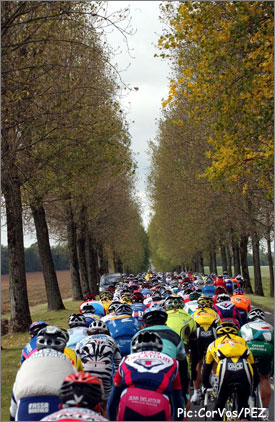 We asked Barry about that second place in 1967: ‘I think that with an older heaad on my shoulders I could have won that one. There were 17 of us away and I knew Van Looy was the man to beat so I put myself right on his wheel. He just eased-up and let us slip out the back, I paniced a bit and went round him and back to the front. Van Looy had a big jump and later in my career I learned that with guys like him and Sercu you had to go before they did. On that occasion I let Van Looy go first and he put two lengths into me, I closed it back to half a wheel at the line, but it was half a wheel not far enough.’

Does he think Paris – Tours has changed much since he last rode it? ‘Not really, it’s fundamentally the same race – one for the sprinters. Having said that and even although the sprinters teams are so well organised these days you can still get lone winners – look at Virenque.’

Unibet Weighs In
Don’t take our word for it though, take a look at what the number crunchers at Unibet.com have to say:

PEZ Mini-Tech: Reports From The Road