The Tour of Georgia starts today in Augusta, and once again it’s set up to be a quality test for any and all. It’ll be a different affair in 2006 without the participation of the Boss himself, but his absence and some others could really open the race to other contenders. PEZ has a look at the course and the possible players.

One Step Up
The Tour De Georgia achieved Hors Categorie stage race status for 2006, which is the level right below a ProTour race – in short, kind of a big deal. It doesn’t change anything about the race, but apparently it’s a lot cooler to have that 2.HC classification. The Hors Categorie classification probably underlines the future goals of the TdG, and it would seem a ProTour race might be possible some many years from now.

A Much More Moderate Course
This year’s course has many similarities with last year’s – two rolling stages, a time trial, two days in the mountains, and then a rolling stage to finish it off. The first two stages will most likely end in bunch sprints, and the first four hours of racing should be obscenely slow – a break will roll away, if someone is unlucky enough – solo, they’ll sit out for countless hours, be brought back and the field will race like hell for the final hour. In that respect, the Tour de Georgia is a lot like the Giro – apparently there’s a lot in common with the Italians.

Beastly Time Trial On The Menu
After two bunch gallops it’s onto the biggest change for 2006 – the Stage 3 time trial, which has been moved from Rome to a Civil War history lesson: Chickamauga, GA to Chattanooga, Tennessee. Stage 3 has been ramped up to a high-quality time trial test – Grand Tour style, and you can bet your house that if Big Tex was still racing his bike, he’d be at Georgia, because you can count on probably three fingers the number of times the Grand Tour contenders get to do a TT of 40k or more before Le Tour – this one measures in at 39.9 – and a tough 25ish miles it will be. 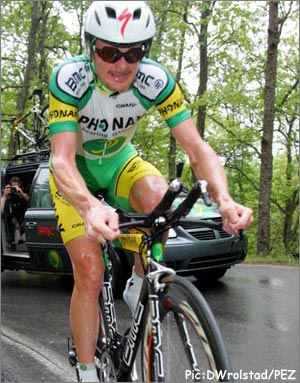 The Floyd is the hands down favorite for the time trial on Stage 3, if things go well, he could very well cement his overall win in Chattanooga.

There is a climb about a third of the way through that pitches to 20% in parts, making the TT similar in many ways to the old Rome course which had a flattish intro to a tough climb, to a technical descent, and then a flattish finish.

Into The Mountains
Some major time will be lost in the time trial if a rider is not up to par with someone like say, Floyd Landis, and unfortunately very few riders are, so there are going to be a slew of riders looking to get some time back, and there’s no better time than the next two stages, because they’re (how’d you guess) in the mountains. 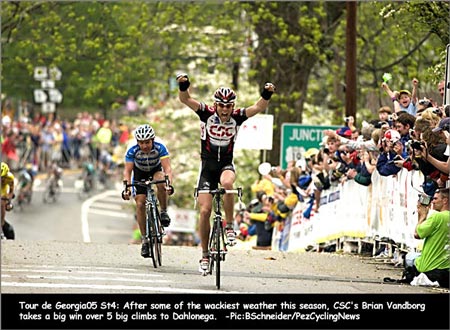 Expect some kind of bunch gallop (probably a smallish one) in Dahlonega – or: perhaps someone can pull a McCartney move a la 2004 and bring it home solo?

Unfortunately, the race organizers took the unbelievably tough two stages of last year and watered them down. Stage 4, the first day in the mountains, going from Dalton to Dahlonega has basically had half of its climbing chopped off, leaving this profile, which looks similar to the climbing of the first edition of the TdG when Freddie Rodriguez finished 2nd – NO slight to Freddie intended!

Nothing too crazy the first day in the mountains.

The climb of Fort Mountain is tough, but it happens so early in the stage that it won’t play much of a role – after Fort Mountain there remains only Wolfpen and Woody’s, and the side they climb Woody’s on will take about 5 minutes at race pace, leaving really only Wolfpen to do the job for the day. It’s a tough climb – no questions, but it’s no race decider at only 12ish minutes probably. Even Wolfpen occurs to far from the finish to cause any crazy elite selection. Most likely, there will be a healthy-sized group rolling into Dahlonega – something like 30-50 guys, perhaps less if the stage is raced very aggressively, but probably not. 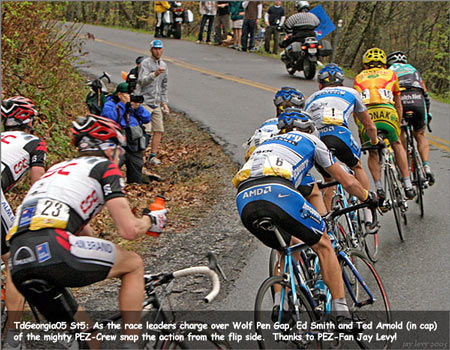 The exact same climb as last year, Wolfpen has been upgraded from a Cat 3 climb to a Cat 2, apparently she steepens with age.

B-B-Brasstown
Stage 5 thankfully keeps the biggest and baddest as its finish: Brasstown Bald. Once again this stage has been watered down and shortened drastically, but these changes will not do much to change the fact that it will still be a brutal stage, in all honesty, it’s now probably more of a fair stage, and not too many should be time cut (as they were last year).

The devillish little twist for 06 though is heading up the short side of Hogpen. Hogpen is a very hard climb from the long side, but the short side, numbering just over 2 miles, is insane. Some would argue that it’s just as hard as Brasstown – it’s completely unrelenting over the few long miles it encompasses. It’s stupid hard. After that, it’s a fun descent into Helen and then up Unicoi, which will further hurt…a short descent to the false flat known as Jack’s and then onto the main event: Brasstown. Brasstown needs no description.

The short-side of Hogpen will creat a selection – no questions. There’s no way it can’t. If someone had the motivation, they could whittle the group down to very, very few – and then most likely hold onto it. The stage has all the makings of the perfect day – there will be opportunities for riders further down on GC to attack like hell and perhaps cause a stir, but they’ll have to be damn fine climbers.

After Brasstown, the final stage will roll over a climb early and the on into Alpharetta for what should most likely be the third bunch sprint finish. 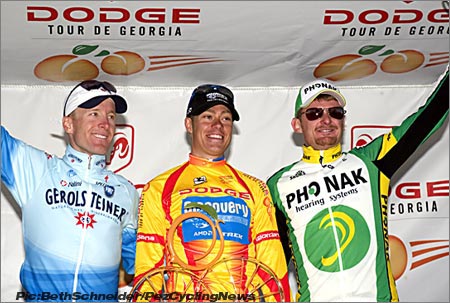 Will it be Danielson on top again? Landis? Definitely not Levi, because he ain’t here.

The Contendahs
This year’s race seems to be suffering from the absences of a number of big time contenders, which will actually be a good thing. There aren’t too many big name Euro-GC boys at Georgia, you can count them on one hand: Landis, Danielson, Popovych, and yeah, that’s IT. Gerolsteiner and Levi Leipheimer didn’t even bother showing up this year, nor did any of CSC’s heavy, heavy hitters (we’ll get to that in a moment).

If you’re a domestic pro in 2006, you should be licking your chops. The race will be hard as ever, but it should allow for some high-quality domestic talent to get in the mix. Guys like Nathan O’Neill, Chris Baldwin, Scott Moninger, Cesar Grajales, Phil Zajicek, Trent Wilson, Ben Jacques-Maynes, Danny Pate, at al. should have a chance to shine if they’re going well. Top 10’s, Top 5’s, even a spot on the final podium is a very reasonable possibility – in recent years, it really wasn’t. If memory serves me correctly, last year Nathan O’Neill was the best placed domestic pro in Eighth overall.

Number 1?
Floyd Landis. Hands down, Floyd Landis goes into this Tour de Georgia as the man to beat. After already winning the inaugural Tour of California and then following it up with the overall at Paris-Nice, Landis looks to be the man, especially considering the fact that his time trialling looks to be world class at the moment, and the Stage 3 time trial will certainly suit that. The only question is Stage 5 and Brasstown. Can someone yank enough time off of Landis on Brasstown, as Danielson did last year? 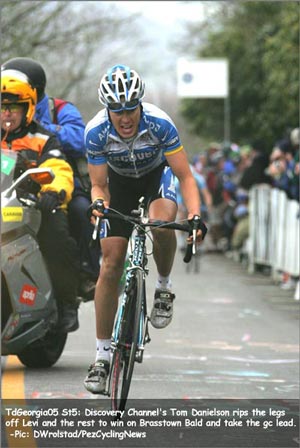 Can Danielson repeat his impressive ride on Brasstown from 2005?

Right Behind Him
Tom Danielson. Danielson looks to be going really well at the moment, especially after he shattered the Golden, Colorado – Lookout Mountain record just a week or so ago – and not by a little bit. Danielson has a Vuelta under his belt, much improved time trialling, and a REALLY strong team behind him that knows how to get the job done. Danielson could definitely be the first to repeat at the Tour de Georgia. He’d be the PEZ favorite if Floyd Landis wasn’t on such a banner year at the moment.

Then there’s David Zabriskie. I mentioned earlier that CSC didn’t send over any real heavy hitters, and that wasn’t meant as a slight. Dave Zabriskie seems right on the cusp of becoming a big dog for overall classification honors. The Tour de Georgia could very well be the spot where Zabriskie emerges as the next Grand Tour hope. He’ll romp the time trial with probably only Floyd Landis as a peer, giving them both a solid head-start, he’ll be fine in the first mountain stage, leaving only about 100 miles of mountains and one horrible finishing climb to navigate – and he has already showed this year this his climbing is improving in ridiculous leaps and bounds.

Plenty More Waiting In The Wings
As I mentioned before: this year should see a lot of domestic pros with opportunities that they might not have had in years past. This is the first real high point of the year for many American riders, and it is treated like America’s Grand Tour – and rightly so. Let’s hope that there will be some upsets to the Euro-boys on the roads of Georgia this week. 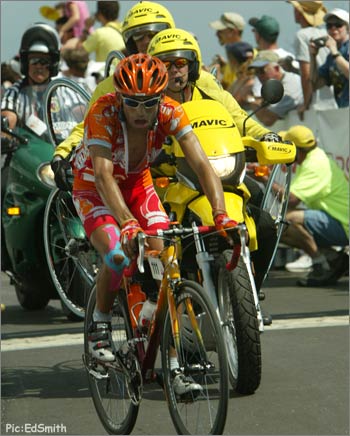 Cesar has been going well so far this year, all with eyes firmly set on Georgia.

One to watch? Cesar Grajales. Cesar will most likely lose a healthy chunk of time in the time trial, giving him a big leash when it comes to the mountains over the next two stages, and everyone still remembers Cesar, 2004 Edition. Grajales can climb, and sometimes out-climb, the world’s best.

Stage Contenders
The first two stages should finish in some kind of bunch sprint – most likely. Something could manage to stay away, but if the past is an indicator – the answer is no. The same goes for the final stage into Alpharetta. Again, this should be wide open. Davitamon-Lotto is sending a team that could pull down some stage wins with Freddie Rodriguez and Henk Vogels. Saunier Duval is brought Francisco Ventoso, who won the bunch sprint at Philly two years ago. 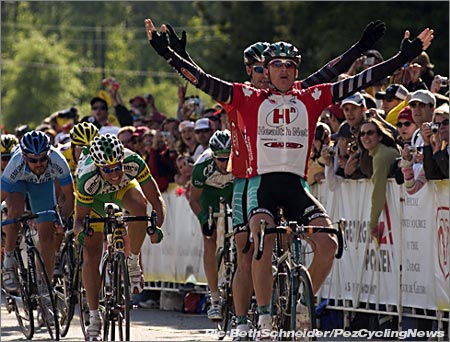 HealthNet will be looking for stage wins and GC – watch for a big week from the team.

These three stages will be top priority for some of the domestic teams, because it will be their legitimate time to shine, and hopefully aggressive, hard racing will be the result. HealthNet/Maxxis will have some pressure as always, but Gord Fraser always seems to come through at some point – he did it perfectly last year in Alpharetta – unfortunately, HealthNet is without too huge Kiwi talents: Greg Henderson and Hayden Roulston.

Of course, the Number 1 sprinter so far this year in America has to be Toyota/United’s Juan Jose Haedo who just seems to get better and better every year, and proved already at California that he can go toe to toe with anyone in a sprint. Toyota/United also have many other options through riders like Antonio Cruz, Justin England, and GC hope Chris Baldwin.

Ah! So many possibilities, keep it tuned into PEZ over the rest of the week, as we bring you updates, reports, pictures, and more!

• Get more info at TourdeGeorgia.com

For more fun, head to www.JeredGruber.com