It seems like the next big race is always right around the corner. This Sunday, the one-day ProTour races begin anew – the first stop: Hamburg, for the newly titled Vattenfall Cyclassics. It might not be steeped in history or terribly glamorous, but there’s not a Pro that wouldn’t give an arm to take a win here.

The wheels on the bike racing calendar never stop turning, no matter what big name is thrown into the awful fire of doping related allegations – there’s no apparent loss in the field when a rider disappears, the show must go on. This year’s Hamburg Cyclassics will see a number of racers missing due to doping allegations, and a lot more racers missing because it’s just way too close to the finish of the Tour de France, not to mention the fact that the Deutschland Tour starts on Tuesday!

Yes, the newly named Vattenfall Cyclassics, occupies a rather tough spot in the calendar, but being the youngest and arguably least prestigious of the ProTour one-day races – the organizers probably aren’t arguing too loudly.

The Route
Organizer Roland Hofer argues that there’s indeed a place for his race in the ProTour: “The Cyclassics race has a profile that favors the sprinters – recently we’ve seen that virtually any great rider can win – and exactly this kind of race is necessary for a well-balanced ProTour.”

Indeed, the race is, on paper at least, not terribly difficult, perhaps only more challenging than Paris-Tours. The course’s biggest elevation gain is less than 100m. BUT – the course has been altered this year, so that the final 120k is significantly more difficult. 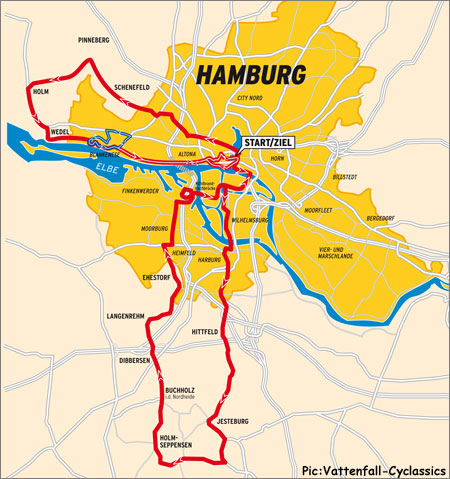 The race begins with a 120ish km large loop which extends first to the west for a small loop before returning back to Hamburg only to set off to the south for another loop and then back into Hamburg where the final 125k will be raced on a tough, hilly circuit. 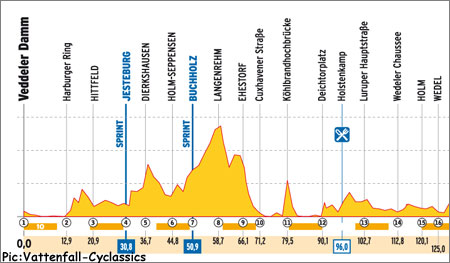 The first 120k will be, as per the norm with the big one-day Classics, relatively easy. 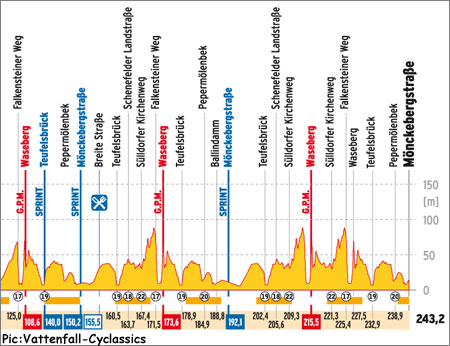 The second half of the race will see three ascensions of the tour Waseberg, along with a host of other little hills – plenty enough to hurt and hopefully enough to form a real selection.

The Race
Like nearly all of the Classics, an early break is allowed quite a bit of leash in the early going. Last year, Leif Hoste and Joerg Ludewig went out for a day of fun out front with Hoste eventually riding away from Ludewig and getting caught in the final 20k. The year before that, a three-up break, so chances are great 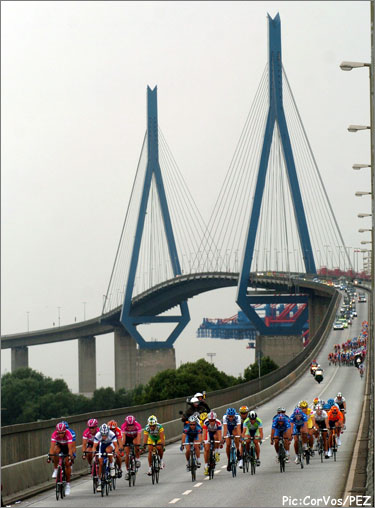 The early going presents no dramatic difficulties. The large bridge the race crosses is one of the principle ones, which isn’t saying much, but if the wind blows, it’s plenty enough to split the field – but probably nothing permanent. 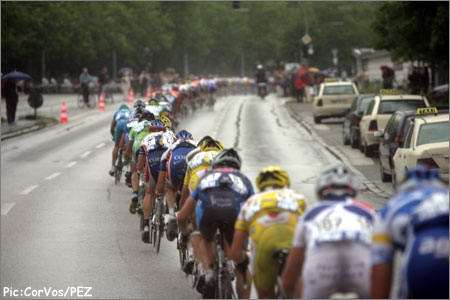 It doesn’t matter if the race isn’t terribly selective early on though – with the proper forcing at the front, every race becomes a horrible, single-file slugfest. 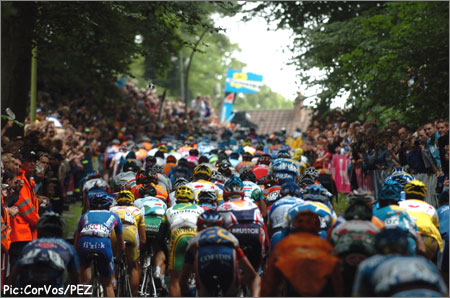 The hilly second part of the race should do the job admirably of ripping the field down to a leaner size. 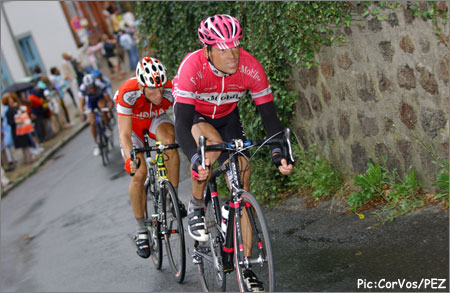 With the proper pressure, even heavily marked riders like Jan Ullrich can have their way. Methinks this year might perhaps be the year of an honest to god breakaway in the final kilometers. That might be hoping for too much, but if the course plays out more difficult than in years past, what was a smallish bunch at the finish could end up being very, very small.

Last Three Editions
Making a prediction for who might win the Cyclassics, which has proved to be a complete crapshoot the past few years, doesn’t quite seem to fit, so we’ll take a look at the winners of the last three editions and perhaps take something from that…and then futilely try and pick a few riders to watch. 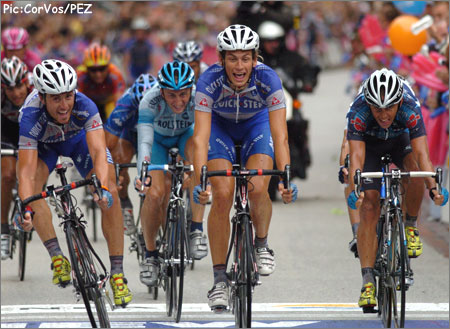 Quick.Step went 1-2 in 2005 with Filippo Pozzato edging out teammate Luca Paolini on the line. Allan Davis followed in 3rd. The lead group numbered around 15, with another group following half a minute back. 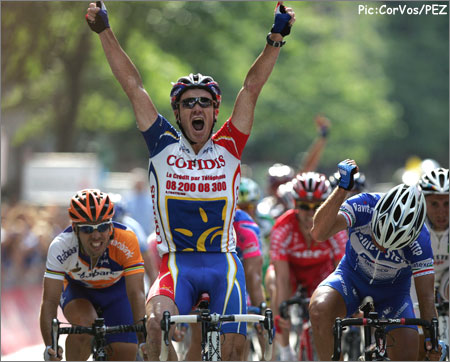 Stuart O’Grady seemed to appear from nowhere to take the win in the closing meters of a wild smallish bunch kick. The lead group had been whittled down to 30ish on the line. Behind O’Grady? Bettini in 2nd, Astarloa 3rd, Freire 4th. 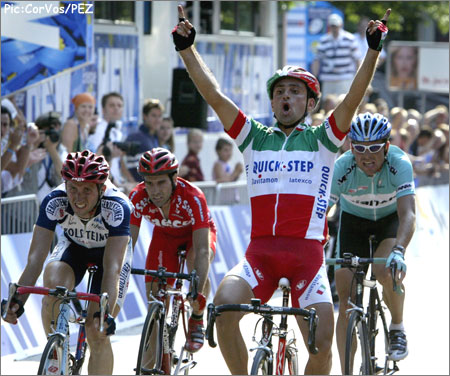 A powerful five-man group got away late in 2003 containing Davide Rebellin, Paolo Bettini, Jan Ullrich, Igor Astarloa, and Mirko Celestino. Bettini took the win ahead of Rebellin and Ullrich.

Who To Watch On Sunday?
Last year, Paolini and Pozzato duked it out for the win after doing the same at the Tour de la Region Wallonne the week before the Cyclassics, so of course they’re tops to watch, especially since Paolini is on Liquigas this go around. Using the Wallonne example though, Fabrizio Guidi just won the overall in Wallonne along with two stages – so he’s probably a safe bet at the moment.

Quick.Step has a mean little hit squad heading to Hamburg headlined by Bettini, Pozzato, and Nuyens. Bettini didn’t ride the Tour, and always has the latter half one-dayers in his sights – so expect something from Il Grillo.

Davide Rebellin recently won the Brixia Tour which ran concurrently with Le Tour, so he’s obviously moving around on the bike nicely – solid bet for a Top 10, but a win? Apart from his magical Ardennes Week a few years ago, he seems to once again be the also-ran.

Barloworld got a Wild Card invite, so Igor Astarloa has to be named, as he’s been in the Top 5 twice in the past three years. It would be great to see Astarloa in the Top 5…

After that, there are names a’plenty: Erik Zabel and Mirko Celestino will headline Milram. Zabel has ridden well in the past (winner in 2001), but he’s missed the lead group of late. Celestino seems to always be there, but never can quite seal the deal. Ballan and Bennati will be Lampre’s top guys – Ballan is a good bet if it gets really hard, and Bennati if things come down to a sprint.

Astana will be making their return to bike racing after the whole team was, well for lack of a better term, acquitted of any wrong-doing in Operacion Puerto – even still, Allan Davis won’t be there – he was 3rd last year. Astana’s man? Surely Vino, and what Vino wants, Vino usually gets, so he could light a fire in the race, if he can’t get away though he’ll get punked in the sprint.

Oscar Freire and Juan Antonio Flecha will be present and accounted for – so you can pretty much bet one of them will be in the Top 5, and if it comes down to a sprint, it doesn’t seem like anyone will get Freire as long as McEwen’s not around – and he ain’t.

Who will be the man for Davitamon? Peter Van Petegem returns after the Tour and is always dangerous, but I’ve got a pick for Sunday: Gert Steegmans. It’s a wild one, no doubt, and who even knows if the team will be riding for him – but Steegmans is really good in hard races (which this will be) and he can finish fast…the only question is whether he can beat Freire or Bettini…

Of course, this will now turn out to be completely wrong, and I’ll probably have jinxed them for this, but why not have a go, right?

Floyd Landis Speaks To The Press