The 2006 Commerce Bank Philadelphia International Championship and Liberty Classic benefiting Fox Chase Cancer Center were held on Sunday, June 11, in front of large crowds and under the best racing conditions one could ask for. “In 22 years we have always had excellent weather. We’re really gifted. This year is a new look, a new sponsor, and we intend to wow the City of Philadelphia,” said Jerry Casale, COO of Pro Cycling Tour, LLC.

The men’s race totals 156 miles which includes 3 parade laps and 10 laps of a 14.4 mile circuit, climbing the 17% grade of the Manayunk Wall on each lap. Additionally, the men do three smaller laps from Logan Circle out to Lemon Hill and back before the finish. The women start just after the men and do 4 laps of the 14.4 mile circuit 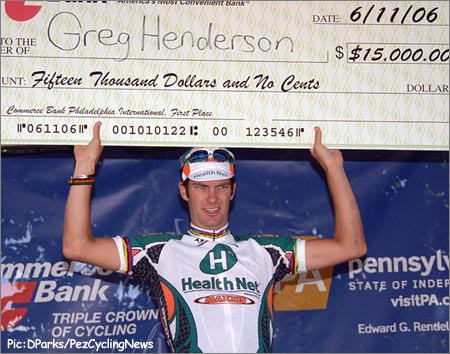 Greg Henderson of the Health Net-Maxxis team and 2004 15K Scratch World Champion scored his second win of the week by out sprinting Ivan Dominquez of the mighty Toyota-United team who took second and Oleg Grichkine of Navigators Insurance for third.

Henderson rolled down to the start finish area following his win and was handed a cell phone. I overheard him say “Mom, I just won Philly.”, and he later confirmed that it was in fact his mom on the line.

The finish was so close a check of the camera was required. But, 2nd place finisher Dominquez said “I almost crashed in the last 300-400 meters. I took it straight to the line. The last 150 meters felt like 150 km. At the moment I jumped I had a gap and I thought I had it but I knew Henderson got it.” Dominquez said that the fans were “ridiculous on the climb, couldn’t hear anything. I never saw so many people yelling.” The Cuban sprinter also told this reporter that Pez is a good website, “I love it.”

Prior to taking the stage for the awards ceremony I asked Henderson if he had any regrets about not returning to defend his Lancaster title. If he had won Lancaster it would have earned him the Triple Crown and a $10,000 bonus. Henderson said that “it is good to win the last two and we’re pretty happy. No regrets.” He went on to say that “the Commerce Bank series is amazing. I’m glad they carried on the sponsorship because the race is something special. Henderson told reporters at the post race press conference that “the race is unbelievable; you can’t hear the guys next to you. I never raced anywhere with crowds so passionate. 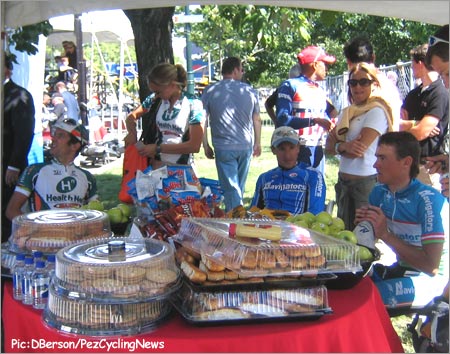 Asked about the sprint, Henderson told Pez that “it was a great feeling coming down the final stretch and telling my teammates to keep going. At 150 meters I found an opening and went straight down the side of the lane. I put my handle bars through an opening and hoped the rest of my body would follow. I was lucky to get past Ivan today,” said Henderson at the post race press conference.
“I’m lucky to be the only sprinter that got over the climb in Reading. Today I won against the best sprinters in the world,” said Henderson.

Third place finisher Grichkine said “the team did a good job and would have liked to win but this is good.” Sergey Lagutin, 3rd place finisher in Lancaster and one spot up at Reading claimed the Triple Crown of Cycling point’s prize. Lagutin gets to drive home in a new Mercury Mariner Hybrid SUV and a check for $5,000.00 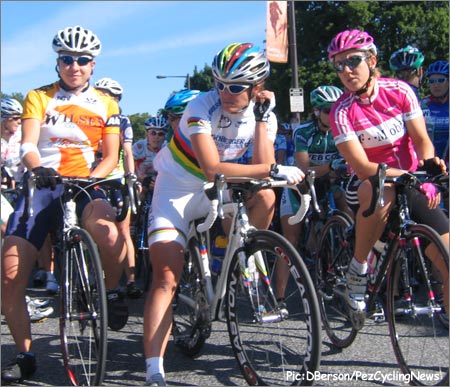 The women’s race – Drama before the Start
Reports of the car accident of T-Mobile riders Ina Teutenberg and Judith Arndt the previous day had many riders wondering how the race might be different this year. Arndt had broken her right pinky finger and Teutenberg was scraped and bruised. Prior to the race Pez caught up with T-Mobile sougnier Jeremiah Ranegar who said that “both riders will start. They are in race shape and ready to go.” Arndt rolled up so Pez took the opportunity to ask her what she thought about the race and about what happened. Arndt said “I didn’t do the previous races, only waiting for today, and who knew this would happen.” In response to my question about the accident she said “as Ina was crashing I hit her wheel with my hand, but it will not be a problem and I hope to be good support for the team.”

T-Mobil teammate Mari Holden witnessed the crash and said “ that when something like that happens right in front of you and I saw Ina on the hood my first thought was is my teammate ok? I’m just glad we all are and we’ll see what happens today.” Holden went on to say that “the team will be working for Ina to win the Triple Crown.” 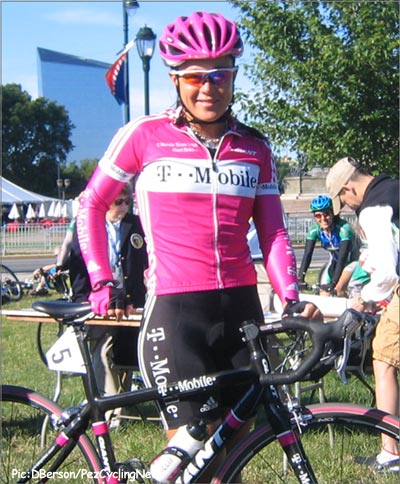 Multiple crashes on the first lap of the Liberty Classic resulted in a shattered field. The first group contained potential Triple Crown Winner Ina Teutenberg of the T-Mobile team. Having won the Lancaster and Reading Classics, Teutenberg was in a good position to win a $5,000 bonus if she scored enough points in Philly and the hat trick of all three races.

Current World Champion Regina Schleicher of Team Nuernberger Versicherung told Pez before the race that she “would be all right for a bunch sprint. T-Mobile will be strong and they are motivated but although we’re a small team we’ll do our best.”

These words proved true as she rode the T-mobile train to outsprintTeutenberg for the win. Schleicher said afterwards that she “had good legs, was feeling good, and thought I could win. I passed at the last second.” Tina Pic of Colavita-Cooking Light took the final podium spot. 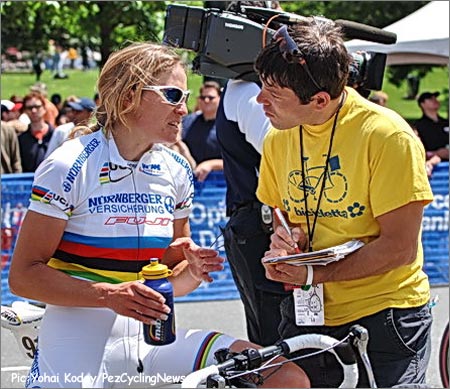 Pez surveyed some of the local team managers and riders on their thoughts and observations for what the race might hold in store for them. Let’s see how well they did:

Mike Tamayo – Director Amoroso-Bicycle Therapy:
“Ina’s tough and if anyone can get hit by a car and win the bike race it’s her. “

Theresa Cliff-Ryan-Verducci-Breakaway Bikes:
“I’m nervous now before the start. I feel like I can throw up. I just started racing in August of last year. But, once we start I’ll be ok.”

Theresa finished in the front group and placed14th. 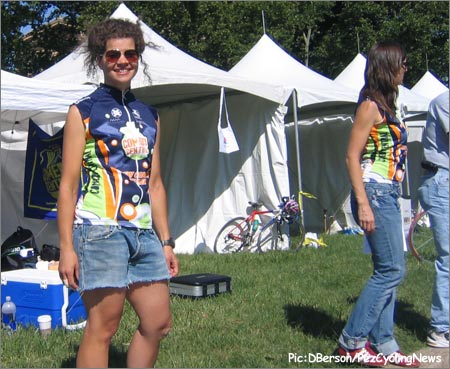 • Angela “Jonny” Johnson – Comedy Central-New Canaan Cyclery, sougnier/rider:
“I like to race against the big girls. I want to come back next year and race here. I have only been racing the road for two years and am also in school for massage at the Swedish Institute in New York.”

Check out Jonny and her team at www.crankyankers.org. She’s determined to come to Philly in the future to race. She also has “boisterous’ hair. Follow the link and check her out.

Pez checked out the insane scene at Lemon Hill. On the way met two lawyers who became “fans” of cycling by default. Both Jill and Abbie, independent of each other, started watching the Tour De France two years ago while studying for the Bar exam in July. Apparently the Tour is the only thing on TV when law students are preparing for their big exam, the bar. Now they are hooked. “We each took vacation this week and went to all the races in Lancaster, Reading, and today in Philadelphia,” said Jill. Neither Jill or Abbie ride but they did tell me they like Pez and think the Mavic Motorcycle guys are funny.

Asked if they new what SRAM was, Jill responded “no and that the SRAM guy gave us the balloon because we looked relaxed. We didn’t know how to blow it up but found the straw and figured it out. 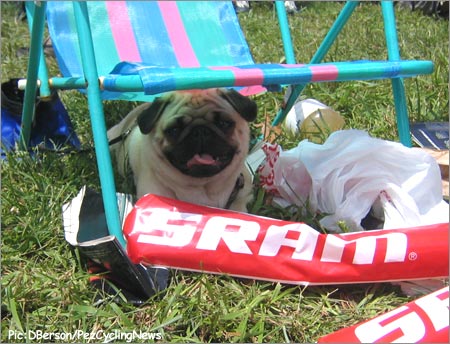 • Lola the pug apparently is also a fan of SRAM, resting a bit on Lemon Hill between laps.

Courtenay Brown, preparing to race for Team East Coast Velo, said “it’s exciting to be down here. I left home not knowing if I’d be doing it. I’ve never been to Philly, having only seen PRO and The Hard Road.”

Jame Carney and Erica Allar said the plan for their team in the Liberty Classic was “to Survive.”

Pez also caught up with Al “Big Al” Rodsinski. Big Al was part of the first CoreStates US Professional Championship race in 1985. He did the event two more times with a best placing of 48th.”I’m constantly riding. I never want to lose sight of the sky. I still don’t drive except for once a year at the Univest Grand Prix in Souderton, PA.” 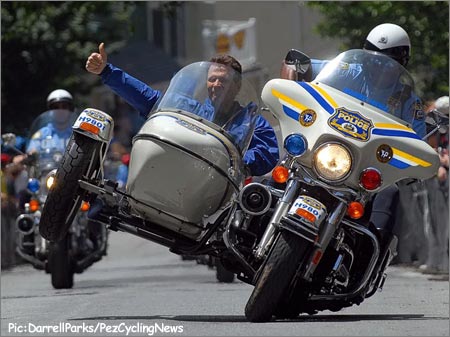 Overall a full-on Fonzie thumbs up for the week!

I’ve been to every race in Philly except one and had the best time ever today. Walking the packed course and “reporting for Pez” I only encountered excited fans, athletes, and volunteers. Vernon Hill, founder of Commerce Bank, said it best during the awards ceremony that “many more Triple Crown events are coming.” As Mr. Hill walked off the stage he said to me that “this is a great blending of the race and the largest bank. It’s only appropriate that we take over such an event.”

See you all here next year.