The second leg of the Commerce Bank Triple Crown of Cycling, the Reading Classic, was won by Greg Henderson of the Health Net – Maxxis team in what was an exciting race and fast finish.

The chase group containing Henderson caught the group of four on the last lap of the seven mile circuit with under one kilometer to go. It contained Sergey Lagutin, Danny Pate, Chris Wherry, and Facci Mauri. Henderson, the 2004 15k Scratch World Champion said he could see the guys just ahead and was lucky to get there and win the sprint. “I basically raced Danny from the last corner,” said Henderson. Lagutin who had placed third at the Lancaster Classic, held on for second place with Pate just behind to take the final podium spot. 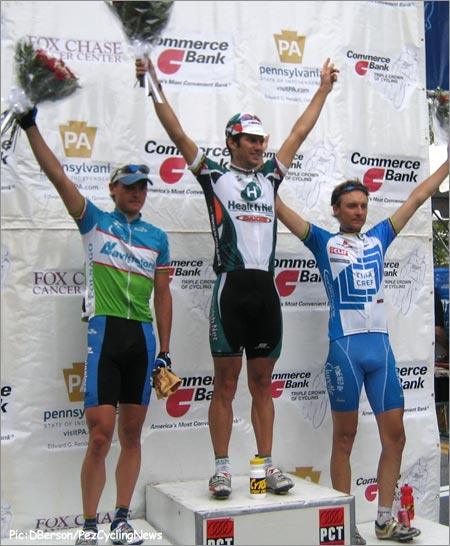 Pez caught up with Henderson immediately after the awards ceremony. The cheerful New Zealander said “it feels real good to win this race.” Sidelined with injuries Henderson hasn’t had much race time this year. “It’s always good to win. I’ve been mostly just training so I’m glad to bring up the results.” said Henderson. The former Wachovia Invitational winner in Lancaster, PA last year was unable to attend this year’s event which kicked off the Commerce Bank Triple Crown of Cycling. He tried to get some racing time in his legs and went to Mt. Hood and unfortunately the last stag conflicted with the Lancaster race. But, he finished a very respectable 37th on G.C. More on Henderson’s stats can be found at www.velobios.com/riders.healthnet.henderson.htm.

Pez asked Lagutin a quick question about his thoughts on Sunday’s Philly championship race given his two recent placings. Lagutin responded the he “feels good and should have no problem with the Manayunk Wall hill.”

Before, during, and after the race this reporter checked out the new host city, Reading, Pennsylvania. One of the perks working within the cycling industry is getting to meet the racers. We’re all fans of cycling. That’s why I am writing and that’s why you’re reading, unless of course you’re checking out today’s daily distraction.

I have a World Champion’s jersey which was given to my by former World Track Champion Marty Nothstein. Beginning with my trip to the 2003 World Championships in Hamilton, Canada, I started asking all World Road Professional Champions that I came in contact with to sign the jersey for me.
Before today it contained the signatures of Eddy Merckx, Johan Museeuw, Oscar Camenzind, Laurent Brochard, and Oscar Freire. Just prior to today’s race I was fortunate to find 2003 World Champion Igor Astarloa who penned his name next to fellow Spaniard Oscar Freire. If any other World Champions are willing to sign my jersey drop me an email at Pez and I’ll send it to you. Ok, back to the day’s events.

With the help of Barloworld teammate Giosue Bonomi I asked Astarloa about his experience so far during Philly Week. “ In Europe we have many races but I took the first opportunity to race here in the USA, said Astarloa. He went on to explain that “I had a good experience in Philly two years ago. Asked what his team’s goals were this year, Astarloa said the “Clasica Ciclista San Sebastian, Deutschland Tour, and of course the World Championships at the end of the season. “ 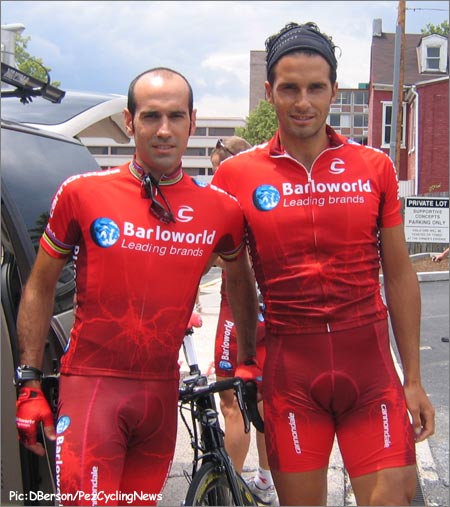 I caught up with Health Net-Maxxis sprint star Gord Fraser just before the start and asked him what he though of the course. He said he checked out the climb and while it wasn’t too bad “it could be a problem depending on the gap and if there would be enough time to bring them back.” Asked about the Philadelphia Championships Fraser went on to say that he “felt confident for Sunday’s race and was looking forward to it.” 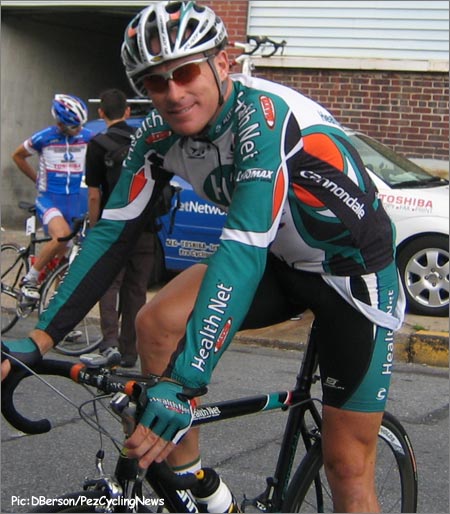 With five minutes to the start of the race, Toyota-United Director Frankie Andreu and I found ourselves taking shelter from a rain cloud at a bus stop. I took the opportunity to ask Andreu what he thought of the new venue. Andrea said “I like the course but I’m mostly happy that there’s a race. The format of a hill at the end is good. I prefer three laps up it instead of just one, “said Andreu. Asked what the plan was for the race Andreu said that everyone is participating and will take turns covering moves since I think the race will split up.” Andreu continued that “JJ (Juan Jose Haedo) can do nothing until the end so that he can be fresh for the last lap if it stays together, and if he makes it over the climb it’s a done deal.” 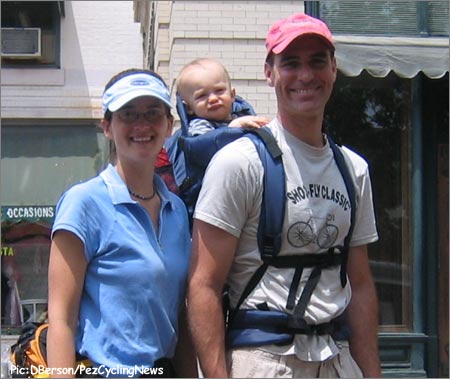 • While under shelter I also met Pez fans Dave and Kate Aurentz along with their 10-month old son Nole. Dave and Kate are both recreational cyclists who follow pro racing over the internet. They live near by and came out to see the action.

The fans sure start young.

While waiting for the final sprint I enlisted the help of Brad Viera, a young Rite Aid rider whose job was done for the day. Brad helped me identify the riders coming in. Speaking about his Rite Aid Team he said “we’re small but we want to learn, we want to butt heads with the big guys and get stronger.

John Eustice introduced the podium finishers for the post race press conference at the Peanut Bar, where yes, there were peanuts on all the tables. It was a pretty big deal with TV, journos, and lots of questions on race strategy and tactics. Henderson said he was “confident and knew the selection would be made on the last lap.” His confidence grew as “guys were getting dropped and I was still there,” said Henderson.

Translated by John Eustice, Lagutin said he “wanted to win alone, I attacked on the last hill but got second in the sprint.” When asked why he was riding so strong he responded that “normally this time of year I am in good condition. I always recover after hills.” Ed Beamon, Director of Navigators Insurance said that Lagutin was a protected rider.

Third place finisher Danny Pate said the climb today was “much better for than the mostly flat course in Trenton. Asked about his chances in Philadelphia, the third place finisher in last year’s race said “I’ve done well there before, I like the heat, and I hope it gets hotter.”

This reporter believes the Reading race has a long future ahead of it. Let’s hope it goes as long as the 23-years that Philadelphia has been around and 14 year run Trenton had.