Dude….somebody pissed off Thor the Nordic god of thunder… and he pissed on the peloton the entire day in the opening stage of the Tour of Denmark. Just like last year, the rain was torrential and the forecast for the rest of the week looks to be more of the same.

In their press conference yesterday, CSC expressed concern that all hell would break loose on the first and longest stage of the race. They were right, that is exactly what happened… at least with the weather anyway. The first break of the day lasted for 100 km and included a hodge-podge of aspiring conquistadors – Aart Vierhouten (Lotto), Jacob Nielsen (Glud & Marstrand), Vincenzo Nabali (Liquigas) and Diego Caccia (Team Barloworld). 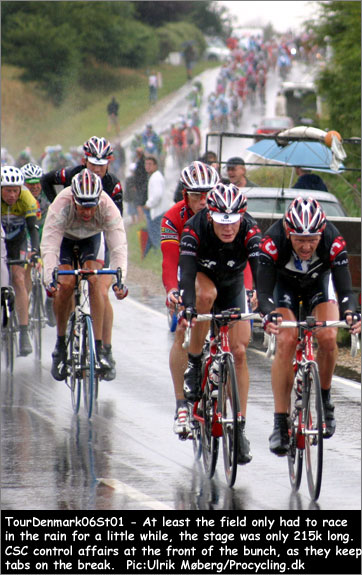 The four took off just after 80 km, but the peloton chased hard and the quartet was brought back with just about 30km to the finish in Viborg. CSC were prepared, and they got their man O’Grady in the next break of the day that made it all the way home. It looked as if Stuey would get a stage win and a much needed confidence booster in what would probably be a four-up sprint to the line. However, is was not to be… not today anyway. Aitor Galdos Alonso from Panaria threw his sled across the line first to win the first stage of the Post Danmark Rundt 2006. The Spaniard came in just before Renй Haselbacher (Gerolsteiner), while O’Grady had to settle for the lowest spot on the podium..

And to prove that he is not to messed with, Thor threw his hammer today and connected with the Belgian Peter van Petegem (Lotto) – due to a ‘poorly placed’ cyst – and German Renй Korff (T-Mobile) who both called it quits, exitting the event before days end.

THE PREVIEW!
The boys “get their roll on” today at the Tour of Denmark which starts at the northernmost tip of Denmark in the quaint Scandinavian town of Frederikshavn. There might be a concurrently running ProTour event, but that will in no way diminish the fervor in Denmark for their national Tour, nor hinder the field strength – this is a big race.

The 2006 event is without the participation of last year’s winner Ivan Basso (winning four of the six stages along the way), who as you know is currently tangled up in cycling’s biggest doping scandal – “Operacion Puerto.” Basso is currently suspended from his team, the local cycling powerhouse Team CSC. CSC is obviously looking to impress on home turf, as well as capitalize on its recent Tour de France successes.

This is the 16th time that the race is being run since its inception in 1985 which saw Moreno Argentin of Italy as its inaugural winner. There is a strong line-up for this year’s edition of the race. PEZ gets inside and has a look at the race, the course, and the possible players.

Denmark has had a number of high profile cycling events in recent days: Ladies Golden Hour World Cup event and Post Tour criteriums should have seen the presence of doping accused 06’Tour winner Floyd Landis, but these serious drug allegations shortly after the Tour win caused the rider to “no-show” at the event.

This week is the showcase event Post Danmark Rundt. This race has steadily gained importance not only for bicycle racing in Denmark but also for racing in Scandinavia as a whole. For those of you who regularly skipped geography class in high school, Scandinavia is comprised of the countries of Sweden, Denmark, Norway, Finland, and Iceland. This is home to the likes of current and former cycling greats such as Magnus Backstedt, Dag Otto Lauritzen, Rolf Sorensen, Bjarne Riis, and Joona Laukka to name but a few. The organizers of the race hope to elevate cycling further in this neck of the woods by having the race be a part of the ProTour in 2009. 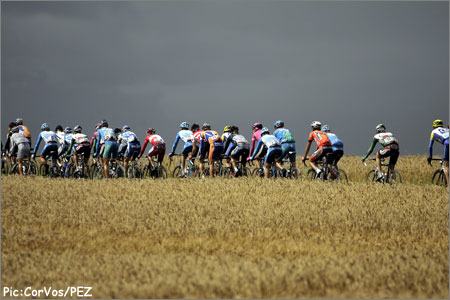 Weather will likely play a big role in the race.

“In 2009 we would like to be a part of the Pro Tour and I’m convinced that we will be” says race director Jesper Worre, who himself won the race back in 1986. The Tour has 5 ProTour teams at the start of this year’s event and that is likely to increase each year up to 2009 where there will be places for 20 ProTour teams. This of course comes at the expense of local riders and teams, of which four are represented in this year’s race. But the ball…errrr, wheels are already rolling with the UCI with getting the Tour of Denmark on the Pro Tour Calendar in 2009. As a matter of fact, the UCI boss himself Pat McQuaid was in town this weekend for the World Cup Women’s races held in Sweden and Denmark to talk about doping, development of women’s cycling, and the Tour of Denmark among other things.

Denmark had been courting the Tour De France organizers ASO for nearly 10 years trying to get a Tour start in the fishing village of Herning on the west coast of Denmark. Unfortunately, this is not to be, as this dream came to an end in December last year as ASO cited the distance and logistical difficulties with moving the race from Denmark to France. A ProTour race in Denmark will be a welcomed consolation prize for the Scandinavians.

The first stage is the longest stage of the event at 215km. It is technically challenging with open country roads, some of which include Paris-Roubaix-like cobblestones. The wind will be a factor here. Expect many breakaway attempts, only to be reeled in the finishing kilometers of the race, ending in a bunch sprint.

Stage 3, 2004: The field was split on Moellebakken with a steepness of 21%, that came just 500 meters before the finish. This year the hill will play a deciding factor on the second stage from Aalestrup to Vejle.

No Alpe d’Huez Here
They say that Denmark is as “flat as a pancake” but as with previous events the race organizers have managed to include some rather gruelling hills on the course.

The second stage is considered the “Queen Stage” in this year’s Tour. This stage boasts some of the only, as well as steepest climbs in Denmark, with the steepest being the Moellebakken at 21%. Although relatively short at 350 meters, this climb has shattered the field and has been the race decider in past events (easy enough to explain: 21% for 10 feet is too much). The riders have to bust a gut three times over this beast. The stage has the makings for some exciting racing. Basso rode home solo in the rain last year. So we can again expect a breakaway and solo victory on the day. 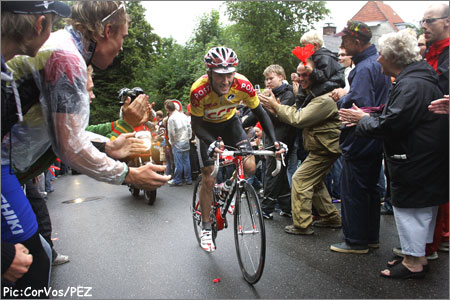 Basso rode away from the field over the Moellebakken.

Stage 3 is a new 185km long route added to the race this year and finishes in Odense, the third largest town in Denmark. The route makes for classic European racing traversing narrow, winding roads, passing through many small villages. There are a number of climbs on this route as well, and the riders should be in for more climbing in the “Danish Alps” as the area is called by the locals. So the general classification riders will need to stay alert at this stage of the race, as a breakaway could do some serious damage to race plans. Those who didn’t fair well in the previous days festivities will be looking to fire off a few rounds on the day.

Stage 4 gives us a double dosage of racing with a 100 km road stage over varied terrain and passing through Rabobank’s Michael Rasmussen’s home town of Tollose in the first part of the day, followed by a 15km individual time trial over a flat but windy seaside course. Expect a lot of attacks and a breakaway in the morning stage. We could see a reshuffling on the GC at the end of the day. 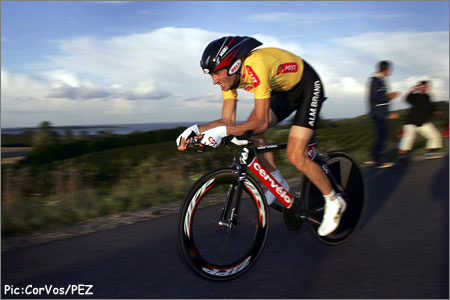 The time trial will probably be decisive in 2006. 15k isn’t too long, but it’s plenty enough to scrounge together enough seconds for the win.

Champs Elysees…Danish style!
The final stage of the Post Danmark Rundt is a 155km stage that closes Belgian Kermis style with 11 rounds on a 6km circuit in the heart of Copenhagen. Already after 11 km, the riders will meet a small climb affectionately named “the leg breaker” by the locals. If anybody wants to do anything on the day, then this is where they will try. Otherwise, the stage is flat and fast, and should finish fast with a sprinter taking the final spoils.

Stage 6, 2005. Here the peloton gets pulled along by CSC on Frederiksberg Alle… the Danish version of the Champs Elysees.

Favorite?
As mentioned, the highly popular Ivan Basso has to watch the race from the couch in Italy this year. To the disappointment of Danish fans, another noticeable absence from the race besides Basso, is the second of Danish cycling heroes (after Tour winner and CSC front man Bjarne Riis of course) two-time Tour de France King of the Mountains winner Michael Rasmussen. The Dane rides for the Rabobank squad which has chosen to skip the event this year.

Do not despair! Like with the Tour de France this year, the race is wide open. The bookies have confirmed their man for the overall victory at days end on Sunday to be Cadel Evans… and who would disagree, seeing the bruising he put on the field in the Tour this year to finish in 5th on GC. But he will definitely have to work for it. There will be no less than three – yes count em’ – three former winners of the race at the start line in this years event – Piil, Asle-Arvesen, and Lang.

The Contenders
Stuart O’Grady, Australia, Team CSC is returning to form from a lackluster Tour de France (after cracking a vertebrae in his back). Stuey is Team CSC’s wild card and will of course be a man to watch. O’Grady is hoping for some late season success as he nurses himself back to form.

Fabian Cancellara, Switzerland, Team CSC
Time trial sensation Fabian Cancellara is another favorite expected to show some “stuff” in Denmark. He’ll be limited to what he can do however as he’ll be in the service of team captain Stuart O’Grady. Expect to see him on the podium at least once this week.

Jakob Piil, Denmark, Team CSC
Piil has had problems all this season with finding the form that has brought him past glory in this race and others such as Tour de France and Paris Tours. Piil broke his hip in a crash at the Championship of Zurich last fall, and has struggled on the bike ever since. He’ll be looking to test his form in the hopes of impressing the home crowd and partially salvaging a somewhat inconspicuous 2006 season.

Look for Team Barloworld led by former World Champion Igor Astarloa in jerseys designed especially for this race. Denmark is apparently an important market for the main sponsor and they want to impress.

Keep it tuned to PEZ for all the latest updates!