Today’s 144 km stage from Al Zubarah to Qatar Olympic Committee ran close to the sea most of the way. And finally, someone else won in Qatar! The linguistically talented Bernhard Eisel nicked both Boonen and Zabel for his first win of the season.

Today, the race was serious from the start. Within the opening kilometres, the peloton was split into several groups. It did come back together before the first sprint, won by Erik Zabel, but the pressure was still on. Several riders tried to breakaway on multiple occasions, but the constant tenacity of the group kept them in sight. 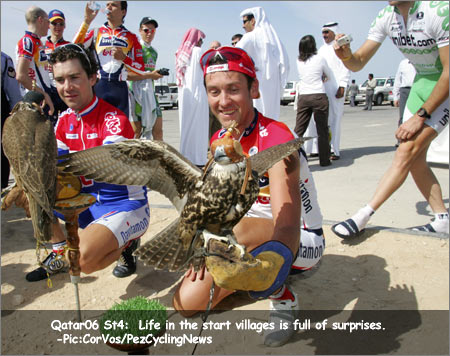 However just before km 50 the constant attacking paid off for a decent sized group. Around 25 riders broke free including no less than 7 CSC riders, along with Zabel, Boonen, and Breschel. This group started to make efforts to work together, with CSC pressured to do a lot due to their numbers. However they only maxed out with an 18 second lead before the pack caught up the leading group at km 54. At around the 60th kilometer, Steegmans broke away, taking with him Fisher, Galdos, Eeckhout and Veneberg. Within 20 kilometers they had a seven minute lead and were looking good. The five contested the second sprint, and it was Fisher, then Galdos, then Eeckhout.

Back in the bunch, Phonak finally decided to do something, as they weren’t represented, and with Clerc and Hunter both having good races, it was time to react. Quick Step finally joined in, and at km 130 the gap was under two minutes. The peloton kept coming and just before being swallowed Eeckhout gave it one last brave attempt. But, it wasn’t to be and it came down to the final meters. 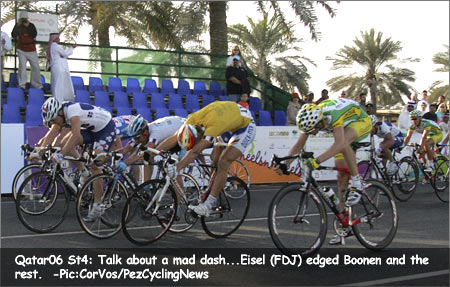 The sprint was beautifully disputed, as Fabrizio Guidi, Eisel, Zabel, Boonen, and O’Grady all looked to be real contenders. It turned out to be one of the tightest sprints of the race thus far, with Bernhard Eisel taking the photo finish ahead of Zabel after benefiting from a lead out by his FD Jeux teammate Christophe Detilloux. Tom Boonen finished third but certainly still maintains the yellow jersey going into tomorrows final stage.