How many roads must a man sprint down? The answer is blowin in the wind… Tornado Tom Boonen blasted one final win today, taking 4 of 5 stages and the overall at the Tour of Qatar. Not too shabby…

Stage 5: Al Thakhira to Doha Corniche – 151.5 km
The final stage of the Tour of Qatar was contested under sunny, but windy conditions. The course for this final stage stayed close to the coast and ran almost due south for the entire length, ending back in Doha. Within the opening 30 kilometers, two different groups of around a dozen riders broke off and then were retrieved by the peloton. 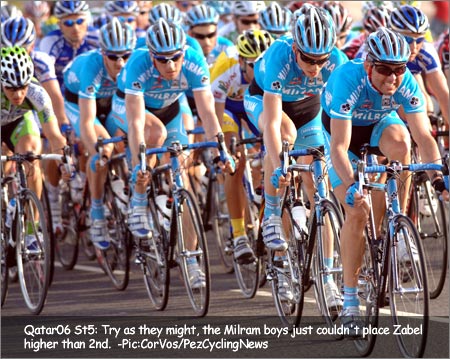 At around that time, Gerolsteiner’s Sven Krauss, who has been extremely combatitive this tour, took off taking with him Meschenmoser (Shimano Skil) and Vastaranta (Rabobank). They had almost a minute and a half gap 5 km later, and were working well together. The course entered Doha at around km 50, and the group of three had over 5 minutes as the 10 laps of the Corniche began. They managed to stay off the front through both the first and second sprints of the day, taken by Krauss and Meschenmoser respectively, but by the time of the second sprint at km 106, their lead was only 30 odd seconds.

Phonak was on the chase, as they were still hunting a stage win, and with Clerc and Hunter in 3rd and 4th, they were hoping to make this a good finish to the tour. Around this time Crosbie, of new Pro Tour team AG2R, jumped over to the leaders. Moments later they were joined by Thijs and Omloop of Unibet (previously Mr. Bookmaker). Krauss decided that with numerical superiority, Unibet should do the work and he began to sit on without working. 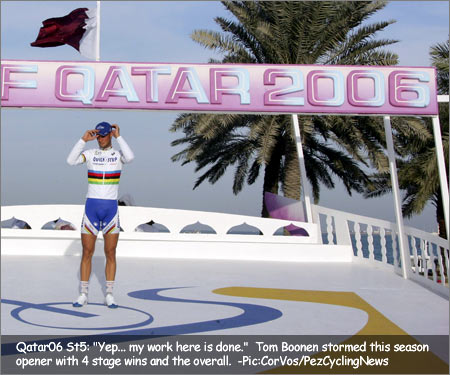 At km 137, it was all over for the break, and with the final 15 km to go, the pack was all together and Milram and Phonak were on the front. As they entered the last lap, the heat was on and things started to splinter, but all the key players remained in the front group. Under beautiful skies, Boonen charged to the front once again and took his 4 stage victory out of five. 80% isn’t bad Tom!