RAAM Type 1: T Minus One Day

Tomorrow, June 13 at 2:00 pm Pacific, the all-diabetic team of Team Type 1 will leave sunny Oceanside, California and set off on a route best flown, maybe driven, and almost unbelievably: ridden – over 3000 miles to the finish in Atlantic City. The team has three goals: the win, the record, and a million dollars – not to mention the ultimate destination of a cure.

PEZ: Phil, so tell me about what’s to come…

Phil: Well, the race starts Tuesday, 5 pm Eastern. We start in Oceanside, California, a town just north of San Diego, so that’ll be 2 pm for us.

Kansas isn’t quite as scenic.

PEZ: So you start in lovely, sunny California – where to from there? 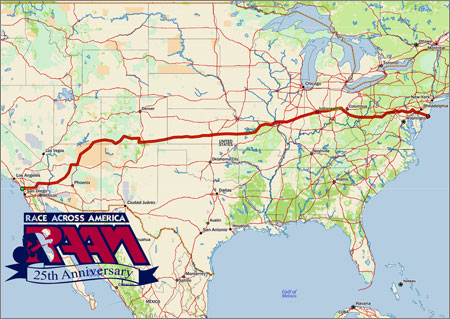 3,043 miles from ocean to ocean and TT1 does not want to know how many cumulative vertical miles.

PEZ: So how are the final preparations going?

Phil: Everything is going great. We had a chance to ride as a team for the first time yesterday. As I’ve said once and I’ll say it again we’ve been perfectly prepped for the race – everyone is fresh and fast thanks to our coaching. Targetraining has been a godsend for our team.

Our form is great, but the days leading up to RAAM are a tad stressful. RAAM is a little bit of a logistical nightmare though, because we have to know where 38 people have to be 24 hours a day for 5.5 days, as well as how to get six vehicles cross-country. 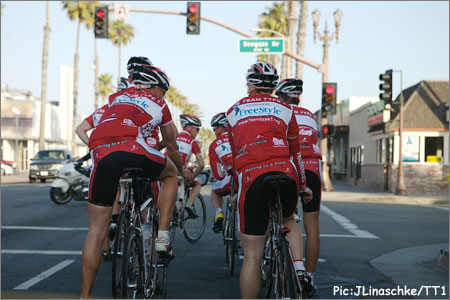 An interesting rule from RAAM – riders must obey all traffic laws.

We have a phenomenal and intelligent crew though, which is making things as easy as possible. We have a great rider/logistics guy in Pratt Rather, who knows what’s going on, as he has done it before.

He has done a great job getting everyone prepped and ready to rock. 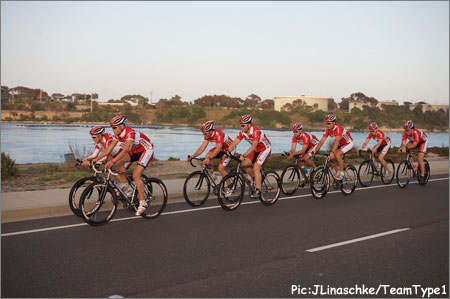 Oceanside and the eve of RAAM provided the time for the first time for TT1 to get together.

PEZ: What have you been doing the last week?

Phil: The past few days we’ve just been riding easy, but mainly mapping out our strategy so we can be the fastest and most efficient group possible. We’ve had mechanics glue on thirty tires on all of our brand new Zipp wheels. They’re getting our Litespeeds prepped. I’ve got to tell you, if it was just our bikes getting across the country, we’d get their first – so a huge thanks to Litespeed and Zipp. We’ve also got our Rudy Project helmets aero helmets – not to mention our new Oakley’s. 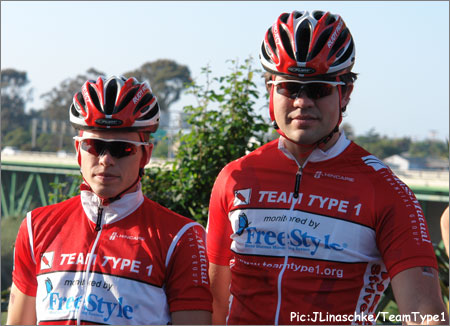 Phil Southerland and Joe Eldridge, the co-founders of Team Type 1, are set to see their idea put into action.

Tomorrow (well, today), we’ve got a big day – we’re doing the Good Morning San Diego at 7 am. We’ll also be working with the Weather Channel tomorrow afternoon on our advertising spots for RAAM.

We’ve been busy. The crew has been working really hard. We’ve been having fun. The Freestyle Mobile Marketing bus has been on the patrol helping some people without insurance get some free meters and strips. 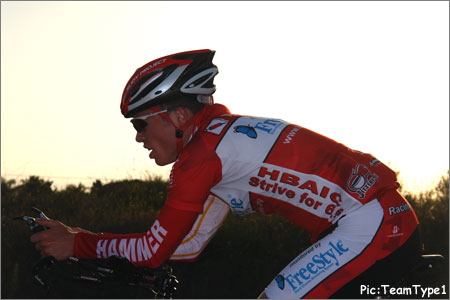 It’ll be straight to the time trial position from tomorrow onwards.

Phil: I’m feeling and going absolutely phenomenal. I’ve never felt this good on the bike in my life.

PEZ: Tell me about your other seven teammates.

Linda Demma – is the sole female contingent on the team, and she’s going better than ever. She brings a lot of medical expertise; she’s a doctor, and she has a PhD. She’ll be one of our engines on the flats.

Troy Willard – is from Augusta, Georgia. He brings a great sense of humour and an upbeat personality. He’ll also be one of our motors for the flat stretches. 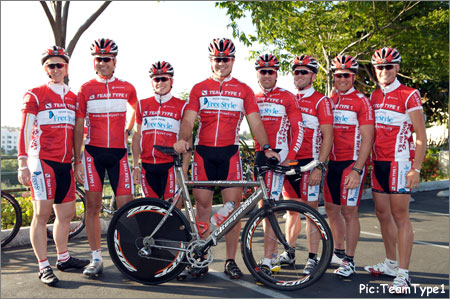 Team Type 1 all together – ready for hopefully five and a half days of hard rolling.

Jay Hewitt – is an Ironman specialist on the National Team – the US Triathlete Team, as well as a high-powered lawyer. It goes without saying, he’s pretty fast. As Dave Crowe in Athens once warned me – watch out for lawyers on bikes.

Bobby Heyer – hails from Seattle, the elder statesman on the team, but his energy levels are through the roof, our crazy guy on the team, phenomenal to have around, brings some level-headedness to the bunch when we need it.

Joe Eldridge – my best friend, co-founder of TT1, he has been putting in the big hours. When we’re team time trialling across Kansas he’ll be my man. He’s also the Clydesdale on the team. He’s the story that got the team started – he used to not take care of himself, but through work and focus has gotten much, much better.

Pratt Rather – as we mentioned before, he’s the logistical guru behind our team – he was also the first diabetic to ever do RAAM way back in 1995. He was part of the winning Co-Ed team back in 95.

We’re aiming to set a record, and along with that we hope will be the win, and with that our ultimate goals of raising 1,000,000 dollars for Juvenile Diabetes Research, and a cure for juvenile diabetes.

Keep track of Team Type 1’s progress as they head eastward across the US starting tomorrow afternoon – their nearly up to the minute Race Blog will be constantly updated with pictures and words. PEZ will also be periodically checking in on their journey.

Check out the RAAM site for more overall information, as well as up to the minute updates from all of the competitors.

Get a Wristband! The red and white is so hot right now.