Sitting in the comfort of our cubicles, watching the pros duke it out on European soil via internet broadcast is all well and good – but nothing compares to the ‘reality show’ of getting out there and doin’ it yourself. Last weekend’s Carrera de San Rafael served up some sunny local racing – NorCal style…

– Story and Photos by Bob Cullinan –
Marin County, California is best known as the birthplace of mountain biking. Road riders are often outnumbered by their fat-tire brethren in this part of the country. But not on this day. The streets of scenic San Rafael, just north of San Francisco, played host to the inaugural “Carrera de San Rafael”, a series of criterium events that signaled the return of professional road racing to Marin County. 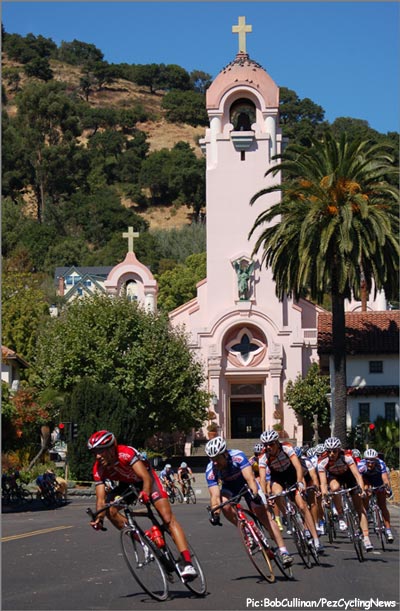 Men’s elite pro riders on a tricky downhill in front of the San Rafael Mission.

Yes, this was a street circuit, but it was a former mountain biker who pulled off the biggest surprise of the day in the women’s elite pro crit. Rachel Lloyd made a name for herself as a mountain bike and cyclocross champion, and she’s the first to admit that she is not a dedicated road racer. In fact, if you look on her Proman/Paradigm team web site, you won’t see Rachel’s bio. But that will certainly change. Rachel took a flyer with three circuits left in the 60-minute San Rafael race, and went on to victory, leading a 1st-2nd-4th finish for her Proman/Paradigm squad.

“This is pretty exciting” said Rachel. “I’ve never actually won any real crits. I’ve won a bunch of cross races, and I raced for 10 years, but I’m just doing this for fun now.”

How much did Rachel train for this race? Not much. Just five days before the Carrera de San Rafael, she was racing on foot up to the summit Mt. Tamalpais in Marin County. It’s a half-mile elevation gain from the bottom to the top of Mt. Tam, but Rachael ran and scrambled to a seventh place overall in the annual Mt. Tam Hill Climb, easily beating the second place woman by more than a full minute. “I can’t climb hills on a bike. I just did that run for fun.” 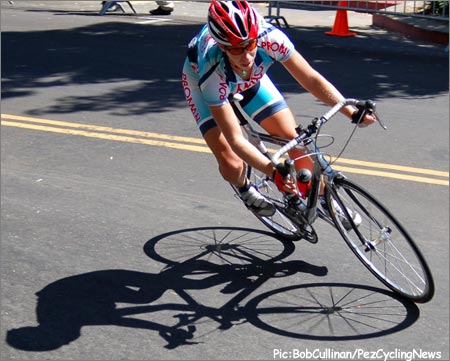 Rachel’s ride to victory in San Rafael wasn’t quite as easy. “I had already been working way too much,” she said. “I don’t really know what I’m doing, so I said to Helene (teammate Helene Drumm), “What should I do, what should I do?‚ She told me to go with the girl from the McGuire team, so I rolled off of her lead, saw I had a gap, and then just drilled it for the last lap.” Rachel was the run-away winner, with Proman/Paradigm rider Shelly Olds second, McGuire’s Laura Charameda third and Drumm fourth.

The 90-minute men’s pro race played-out much closer to the script. Two teams dominated the pace-setting around the one-kilometer circuit. The California Giant Strawberry squad (one of the better names in west-coast cycling) did the majority of the pace setting, with the BMC team occasionally rotating to the front. The victory went to BMC’s Owen Laine, but the assist goes to Cal Giant.

“We were letting Cal Giant do the work,” said Laine. “They must have had 15 guys out there, so there was no reason not to just ride their train. They were leading it out, but it wasn’t killer fast. I knew that most of those guys would pull off before the sprint, so it was just a matter of waiting until the last lap.” 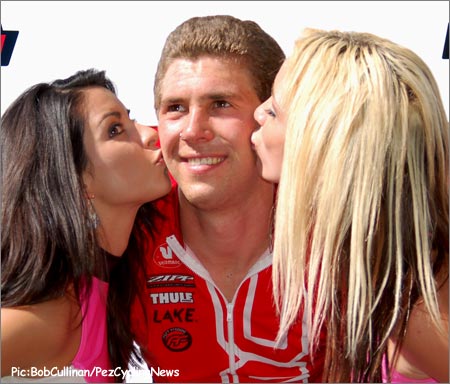 “Coming across the line, I thought I might have had it. I was never sure. Those are all really fast guys. I gave it everything, and got it by about an inch.” HealthNet/Maxxis rider Michael Sayers settled for second.

The X-factor in the elite men’s pro race, or rather the XY factor, was the presence of twin brothers Ben Jacques-Maynes and Andy Jacques-Maynes. Andy rides for Cal Giant, while Ben is a member of the Kodak Gallery/Sierra Nevada team. The brothers could be seen pulling for one another, both literally and figuratively, but the race winner didn’t notice any type of brotherly-love at the end of the race. “I’ve seen that in the past, and I was kind of looking out for it,” said Laine, “but I didn’t see that today. I think the bigger priority for Andy today was riding hard for the Cal Giant team.” Andy took third in San Rafael, with Ben in fourth.

To say that Owen Laine is new to the podium would be a bit of an understatement. This is the biggest victory of his career, and “even though this isn’t the hardest race I’ve ever done, it’s definitely my best result.” After the official awards ceremony, Owen was actually given lessons by the “den-mother” of the Umbrella Girls on proper podium procedures. She showed him the right way to accept both his victory medal and the cheek-to-cheek kisses from the podium pretties. Owen seemed to finally find the correct form, but it took him a number of tries, and more than a few lipstick prints, to get it down pat. 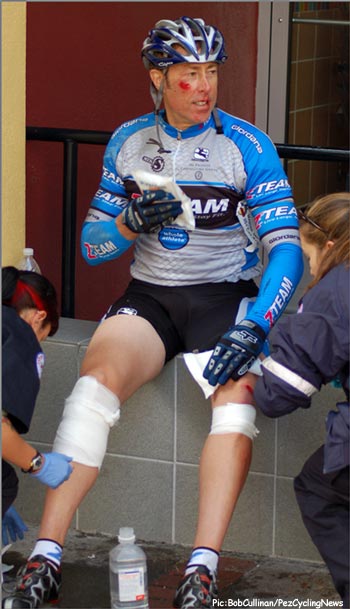 Ouch: Russ Willsher receives road rash treatments – probably not what Keith had in mind for his international debut here on PEZ..

This first Carrera de San Rafael seems to be a success on all fronts. Good racing, great weather, adequate crowds, and thankfully, only one high-speed wipe-out all day. Z-Team’s Russ Willsher hit the pavement hard in the men’s 35+ Cat 4/5 race. He blew a tire at the bottom of a tricky downhill high-speed turn and went sliding head-first into the hay bales. Medics treated Russ on-site, but his injuries were only skin-deep. He was seen limping around later in the day.

Keith may want to switch to mountain biking.