Scotland – lochs, heather, mountains and Mel Gibson with his face painted, right? Yeah, yeah, but we have produced the odd good bike rider too guys, and there’s no other race in Scotland that has served as a better beacon for success than the Tour of the Trossachs.

Dust-off them reference books and go back to the Peace Race winner for 1952 – Ian Steel of Scotland To this day no other English-speaker (the Glasgow version of English that is) has triumphed in the cross-winds and cobbles of Eastern Europe. In the late 60’s a young carpenter from Glasgow was one of the best amateurs in the world with stage wins in the Tour of Britain, Peace Race and Tour de L’Avenir; Billy Bilsland would go on to a successful pro career with Peugeot and Raleigh in the early 70’s.

In the 80’s Bilsland’s protйgй Robert Millar, also from Glasgow, hammered his frail body to two second places in the Vuelta, the same placing in the Giro and fourth plus King of the mountains in Le Tour. The next decade saw us produce that remarkable man, Graeme Obree, double hour record holder and pursuit champion. 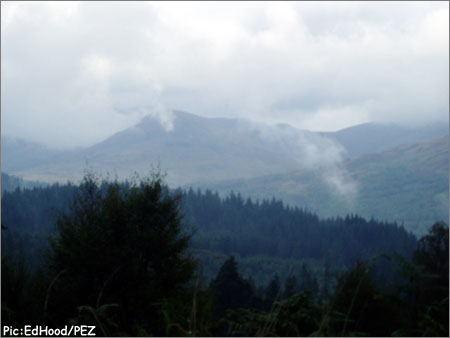 Something In Common
Apart from their nationality these great riders all have something in common: they have won the Tour of the Trossachs. There aren’t many classic races in Britain, never mind Scotland but the Trossachs is just that with the first edition run in 1943. It’s a time trial of around 50 kilometres looping through the beautiful Trossachs region, with lochs, mountains and stunning scenery. The old clichй – a test of man and machine – could have been invented for the Trossachs. 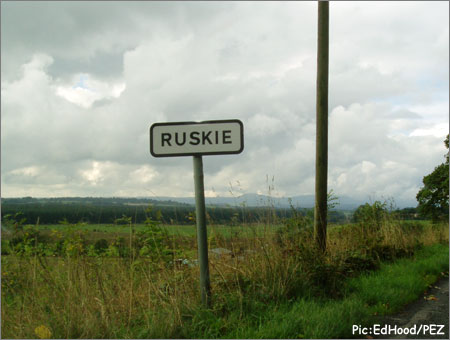 There is very little flat road on the course but there are two major ascents, dozens of lesser battles with gravity and bends of every radius not to mention some gnarly road surfaces. If you can’t handle a bike then you won’t win around the Trossachs. With it being held on the first weekend in October it can be cold and wet too. 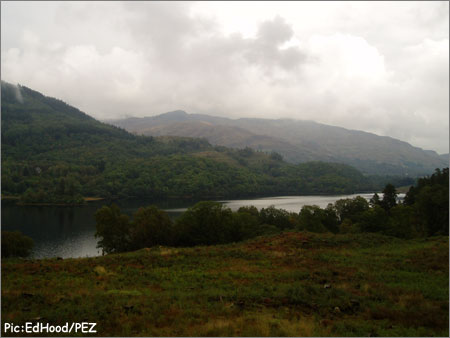 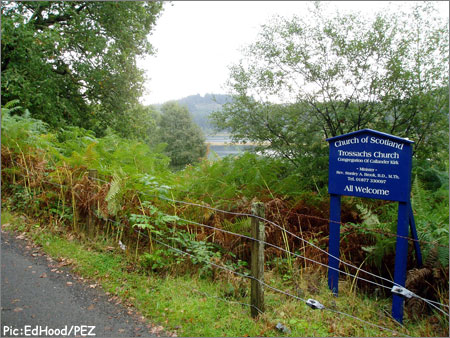 A Few Years Back…
Back when I was a boy the race used to attract huge crowds of club cyclists and the hairpins on the biggest climb of the day – the Dukes Pass out of Aberfoyle – used to be lined two or three deep. Changes in lifestyle have put an end to the crowds, but it’s still a great race to win. The race’s amateur status is firmly endorsed by a note on the start sheet which tells riders that they must ‘shout!’ their number at the finish. I had a vision of the UCI adopting this: “look Fabian don’t start, we know there’s no time on the board for you but you were told to shout your number at the finish son.” 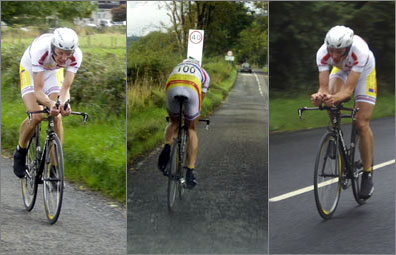 Hot favourite for this year’s version was Jason MacIntyre from Fort William, which is way-north in the Highlands. Jason rides for the Edinburgh-based sponsored club, Velo Ecosse and has enjoyed an outstanding season. In June he travelled south to the British 25 mile time trial championship and came home with the title, leaving the English cycling establishment stunned. It was no soft win, the guy he beat to win; Chris Newton has been a world champion twice on the track in the team pursuit and points. Later in the year it was the British circuit time trial championship – the equivalent of the continental or US time trial champs and just to show that there hadn’t been any mistake Jason won that too.

The only rider who was going to get near Jason was professional and occasional Pez diarist, Evan Oliphant (Scotland & Recycling). 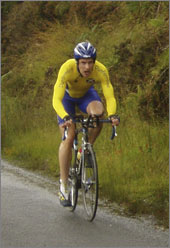 Ray Wilson enjoys his time on the Dukes Pass.

The hardest climb in the race comes within the first two miles; the Dukes Pass rears-up from the picturesque little town of Aberfoyle and takes the riders high into the mountains which ring the town. Over the top there’s a technical descent to the shimmering lochs which nestles in the folds of the mountains, Loch Achray and Loch Venachar. This section is fast but tricky with pot holes, bends and slippery roads beneath the trees which frequently touch above the road to form a leafy canopy. 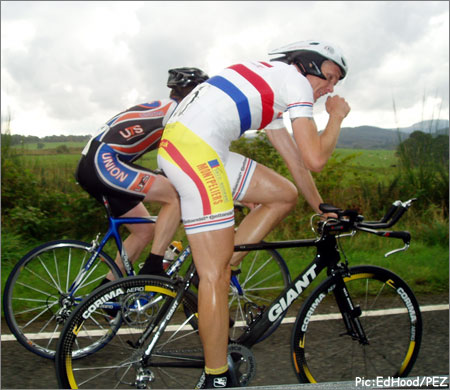 Jasob MacIntyre and Phil Brown compare notes after MacIntyre made up five minutes on Brown and caught him.

The second town on the route is Callendar which the riders skirt before a long, gradually-rising straight to the second big climb which takes the riders over, then down to the village of Thornhill. The final heart-breaking stretch to the finish with its long drags and head-wind is a killer and the race can be won and lost over these last few miles. At the top of the big climb MacIntyre was already 15 seconds clear of Oliphant and would build his advantage to almost two minutes at the finish, taking more than two minutes from the course record in 1-06-05, to win the race for the third time. 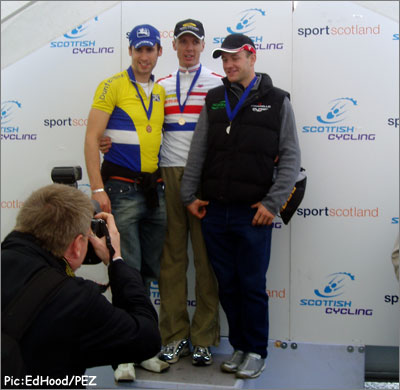 The 2006 Podium at the Tour of the Trossachs: Jason MacIntyre, Evan Oliphant, and Ray Wilson.

It may have been an expected victory but it wasn’t straight forward one, twice he had his lo-pro carbon Giant up on the grass verges due to the combination of wet roads and bad surfaces. Oliphant took second with 1-07-53, this broke the course record too, but the guy in third place was interesting. Ray Wilson (Dunfermline CC) has only been a bike racer for 18 months but got himself to within just over a minute of the experienced Oliphant. Maybe next year Ray? The sun even shone as the times were read out and I pondered what it would take for an enterprising promoter to get David Millar to take his Scott round the course next year – that would bring the crowds back. 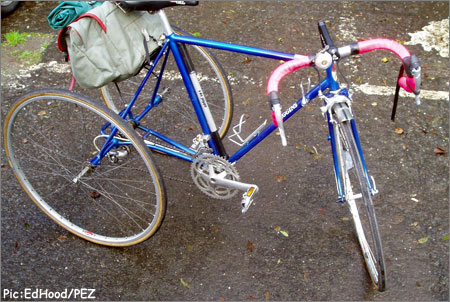 Rumour has it that Jason will be on this machine in 2007.