If it’s not the heat, it’s the rain, if it’s not the rain, it’s damn hard racing, and sometimes, if you’re lucky, you can get all three at once. Team Navigators’ “T-Bird” is enjoying his Tour de Langkawi, though a bit quietly due to his voice’s vacation, and enjoying the extra big mp3 player between his ears.

Tour de Langkawi: Stage 6 – The ‘Go To’ Guys
Ok, so we’re finished with the longer stages of this tour (yeah!). Stage 6 featured the extreme heat that we’ve become accustomed to as well as some pretty tough little climbs in the early going. Our plan was to make sure we had someone in the early break (which took painfully long to get established!) which we did thanks to our new effervescent “rookie” Bernard Van Ulden.

The severity of the climbing eventually re-shuffled the deck, though, and we found ourselves without representation midway into the 178 kms. Team South Africa assumed the position (thank you, may I have another!?) and began churning out the tempo to keep the escapees in check. There were some minor G.C. threats in the move and with 20 miles to remaining we again put our “go-to” men, Shawn and Bernard in the rotation to help bring down the gap. As it turned out, the chasers left it a little late and the break managed to finish just 15 seconds clear of a dashing and crashing field. Frenchman from AG2R was able to hold off Irish strongman David McCann for the win. 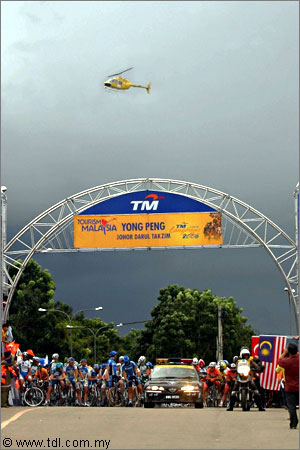 Nothing like starting your day with clouds the color of coal hanging over your head.

Stage 7 – Gone Fishin’
At 116 miles, stage 6 was the longest of the tour. Overcast skies and cooler temps were a very welcome change, but a frantic start still ensued despite a pleading of ”Pianooooo!” by the same Italian rider who endeared himself to the monkeys a couple of days back. Our game plan remained the same and sure enough, Rookie made the move again. Now, at this point the boys in the peloton are staring down the barrel of another hundred miles lined up behind the Green Machine.

You may wonder what one does to occupy time in such a situation. Well, normally I’d chat it up with one of my teammates or some other speaker of the King’s English, but since my voice has gone missing in recent days, I had to turn on the old hard drive ‘tween the ears. I’ve got about 7,500,000 gigabites stored up there that I can shuffle through. Not just music, either. I’ve got video capabilities. Fishing trips, family vacations and the time that I was 13 and…well, you get the idea. 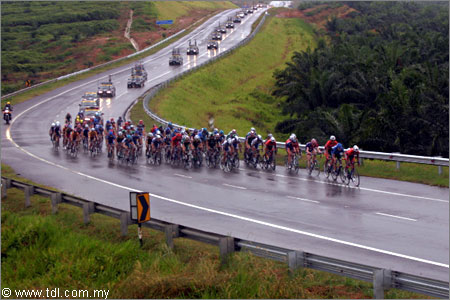 Nothing like a little tropical downpour to startle one back to consciousness.

Anyhow, right about the time I was going to land a 25 inch Cutthroat on my favorite river, a raindrop jerked me back into the reality of the Tour de Lankawi. About 25 seconds later it was a downpour and let me tell you, it had every bit of my attention! About 25 seconds after that all 35 ounces of sunblock I put on my face this morning washed into my eyes and I became intermittently blinded and in the fleeting moments I did have sight, I usually found my brake lever about halfway up the guy’s chamois in front of me. It was truly invigorating. Every one should try it.

Nonetheless, the rain continued and the 9 men in front grabbed upwards of 7 minutes on the field before a strong chase began as the Japanese national team joined the South Africans. Meanwhile, Bernard has crashed up front in the breakaway and managed to break his front brake lever. He is unhurt and quickly rejoins the break. Back in the chasing field, we have 25 clicks to go and we’re machin’ along single-file at 33-35 mph and eating into the lead dramatically.

Approaching the 5km to go, Mark Walters flats and we find ourselves chasing an already full-throttle peloton to get him back into the race. Shawn Milne and I blow our respective gaskets and limp in some 3 minutes back wondering if Mark was able to make it all the way back. He did. 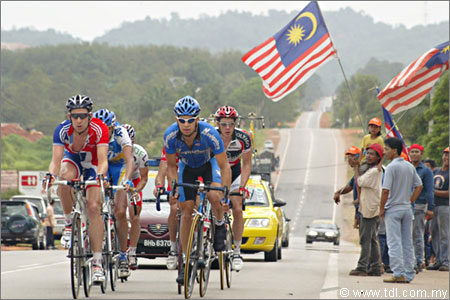 Bernard Van Ulden worked himself into the break and rode it to 3rd on the day.

Cloud Ten
But, the real big news of the day is Bernard held off the peloton to finish 3rd on the stage! I’ve heard of Cloud 9, but I think Bernard found Cloud 10 today. A podium spot in his first big tour with a new team. Very Cool. He chalks it up to the broken brake lever. The final kilometer had a couple of very tight, rain slicked corners and without the use of his front brake, he had no choice but to rail them and in the process, open a gap that only 2 riders could close. The rider who won? He’d be that primate-speaking Italian bloke who so badly wanted an easy day. Go figure.

Stage 8 – Short Racing, Long Day
Today was stage 8 and although we only raced 42 miles, it still turned into quite a long day due to nearly 2 hour car transfers to and fro. On the way to the race while catching a few Z’s, I was quite suddenly awakened as our car dodged what I glimpsed as a large, swirling black mass in the middle of the road. It turned out to be all of our spare bikes that had just peeled of the roof, racks and all. Yikes. Who needs coffee with that kind of jolt? The race seemed tame in comparison. 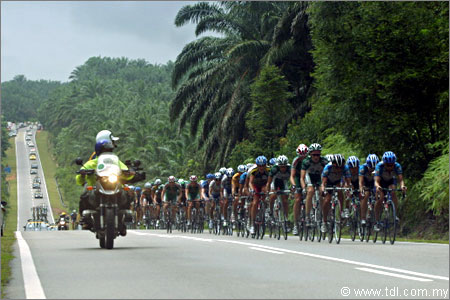 The racing today was pretty much par for the course with the Japanese throwing down the first attack of the day and a break finally establishing itself after 20 kms along with a good, drenching rain. We failed to get a rider in the move and ended up contributing to the chase that eventually netted our catch with 3 miles of racing remaining.

Disco Sprint, Baby!
The final kilometer of the race was a bit on the “disco” side with 2 very tight corners and the first real bunch finish of the tour. I spied a few riders in the final 100 meters that decided to cop a squat in the middle of the bike race, but I don’t think anyone got too hurt. Our sprinter, Oleg Grishkine, recounted to us after the stage how he tried to make a right turn when the road went left. I think the Belgian next to him was shouting “No, your other left!”.

In the end, so and so from Credit Agricole took the stage.

Tomorrow is the deal breaker. A 16 kilometer time trial. Cesar is just 2 seconds out of 3rd place, so he’ll surely be giving it the stick.

I’ll try and get back with one final report after the circuit race in Kuala Lumpur on Sunday. I hope you’ve enjoyed the ride so far. I know I have.