The Tour de Langkawi is in the record books and Team Navigators’ Burke Swindlehurst is heading home, sort of. The final two stages were a literal wash, a non-important TT for T-Bird and an outright deluge of biblical proportions on the final day crit. Here’s the final update from the snorkeler.

Hey Folks, so we just wrapped up the final stage of LTDL 2006. This will be my final entry for the tour and I hope I’ve been able to give you all a good glimpse into the race from a rider’s perspective. It’s been quite a ride and there’s been the requisite amount of blood and sweat and, though I have seen no tears, judging from the wounds a certain German rider sustained a few days back, I’d be surprised if that quota was not also filled.

Easy For Some, Crazy Hard For Others
Yesterday’s Stage 9 time trial of 19 kilometers was a nice little loop with a few rises and tight corners, but basically flat. Having shown is time trialing prowess at last year’s nationals in Utah with a fine 3rd place, Bernard was given the “pep” talk by Ed and told to give it everything for another shot at the podium. As one of the first riders to go off, he held down the #1 spot for quite a while with a time in the low 20 minute range. 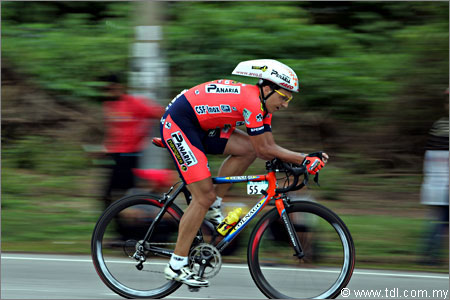 I limited my effort to just short of tempo, since the time cut was the only thing I needed to worry about. Cesar gave it everything and in the end picked up a place on the general classification, raising him to fourth, the spot where he also finished in last year’s race. Bernard’s effort in the end was good enough for 4th on the stage. I know he was disappointed to not have made the podium, but his performance here has been very impressive given the amount of work he’s done for the team and it certainly bodes well for the future.

Today’s 10th and final stage was held in the heart of downtown Kuala Lumpur amidst the stunning landscape of such marvels as the Petronas Twin Towers. Many thousands of spectators turned out to watch the 18 lap criterium that would total just over 30 miles.

The course itself featured some rippled brick corners and it’s share nasty sewer covers and storm drains which would soon become quite hazardous once the clockwork afternoon downpour commenced. The riders were told that once the rain started, we’d have one additional lap of racing that would count toward the final classification time and after that the race would continue for stage placings only. 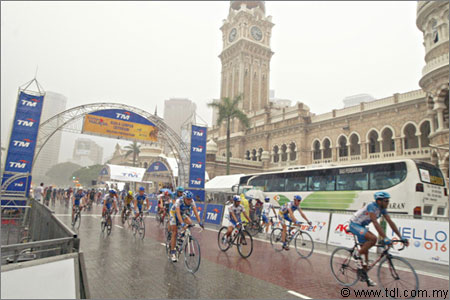 The rain once again came down so hard that in one corner it was nearly calf-high and so dangerous that as we came through the start/finish area the whole peloton stopped to signal our disapproval of the risk posed in continuing. The race officials had a different idea and ordered us to ride and additional 5 laps for no other reason than the spectators deserved to watch pencil-thin men ride around city streets soaked to the bone covered in nothing but lycra. Skeletor meets AquaMan. Sweet. 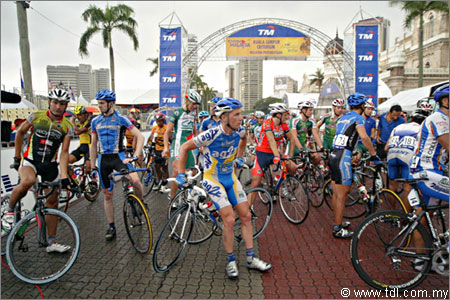 The riders weren’t too happy with the goings on and stopped.

Anyhow, that was the conclusion of the race and I don’t think there were any changes in the final classification, nor do I believe there was even a winner declared in the stage.

Now it’s time to pack up the bags and bikes and head back to the U.S. first thing in the morning. It will take a total of 19 hour of flight time to reach Los Angeles. From there we’ll meet the rest of our team in San Rafael, California for our official Navigators Cycling Team training camp where we’ll pre-ride some of the upcoming Tour of California stages. I’ll be watching that race on ESPN like most of you, since my sickness at this race prevented my selection. Bummer, man. But, that how the lung-cookie crumbles.

I hope you’ve enjoyed. Till the next go-round….