Tirreno-Adriatico: The Race Of The Two Seas

The true Italian season rolled out today as Tirreno-Adriatico: The Race of the Two Seas, began deep in the boot’s ankle. With sparkling waters, sunny skies, and a thousand ‘perfetto’ recipes for tomato sauce, this race deserves more attention. Our Italian Bureau offers up this classically PEZ preview…

Something has changed in the last few days. There is still the cold wind blowing from the north, the Adriatic Sea still shows his bad face to the window of my bedroom, but something has definitely changed. Maybe it was the first sound of a bird in the morning maybe circling the fish boats morning catch.

I was born on the Tyrrhenian Sea and I lived alongside it for 26 years. For the past 5 years I’ve been living on the other coast; I now call the Adriatic my neighbor. I can feel how different they are, and how different the lands and people are that live with the two seas. Tirreno- Adriatico is the first important cycling race of the year in Italy. It is called the “Race Of The Two Seas,” but in fact its route is designed mostly on the Adriatic Coast. A few days after the finish in San Benedetto del Tronto the magnificent Milano – Sanremo will take place, running from the capital of the north (Milan) to a small city on the Tyrrhenian not far from the famous Cote d’Azur, but that is another story… 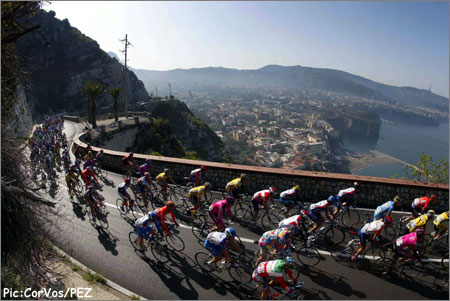 The field climbs along the Adriatic Coast.

Italia: Front And Center
It is the Italian moment of the whole cycling season, because the Belgians are still fighting with the snow and the French are still sleeping under the fog, while our coasts are touched by the first warm rays of the sun. There’s something that touches your heart when you discover a yellow mimosa tree hidden between the rocks or a white almond tree on a young green hill over there. In just a little while you will discover in the air the very first smell of the life.

A World Apart
Two seas and two different ways of life. The two coasts are not so far (nothing compared to the American distances), we are talking about 300 km maximum, but the Appennino region is between them and divides the people. The Appennino is a long chain of mountains starting from the western Alps and finishing in the southern part of Italy – Sicily. The mountain chain effectively divides the Italian territory into two distinct sides. 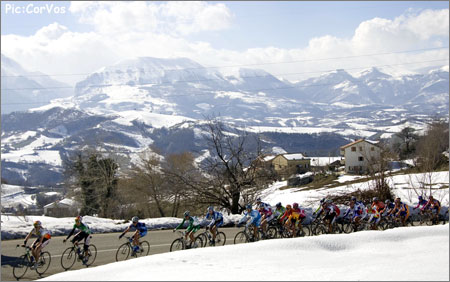 Don’t Even Get Me Started On The Fish
The fish are different, as well as how you prepare them and enjoy them. The Tyrrhenian fishes are bigger, the best way to cook them is inside the oven covered with salt (the Genoa way) or with the potatoes and olives. The Adriatic fish are smaller but you can find them more in number. Fried or row is the best way to prepare them. 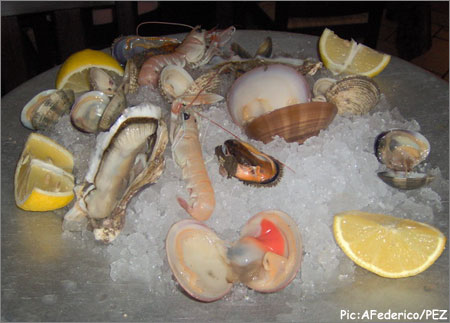 Who Do You Love?
The women are different. On the West Coast they are more domestic and devoted to the family (try to think of a mother from Napoli) [er uh, think that Napoli is a small town in Idaho… tECH eD]. On the East Coast you will find them more aggressive and dedicated to the “look”. Someone says that this fact is due to the higher competition they find with the eastern immigration from the near coast of the ex- Yugoslavia.

The women on the Tyrrhenian Sea take the sun looking to the sea. The women on the Adriatic turn to the mountains. The seas are different. The Tyrrhenian Sea changes slowly. It advises you on coming changes with great generosity. You will be able to understand when it is time to leave the anchor and head on in to save your boat, your crew, your life. During the winter time you will find a dry air on the West Coast and a strong wind coming from the mountains and blowing to the sea. 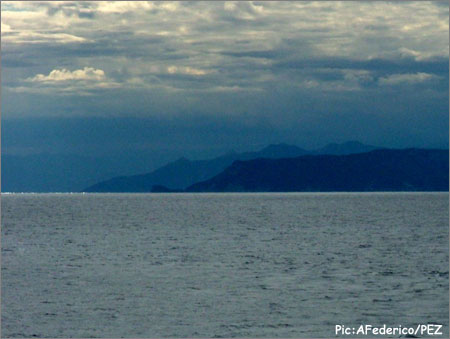 The calm of the Tyrrhenian Sea.

Two Different Seas
The Adriatic sea is nervous. It changes quickly and without warning. The waves change their directions and sometimes you can find two – three seas already formed. On the East Coast the winds come from the sea during the winter and sometimes blow with vitriolic force. 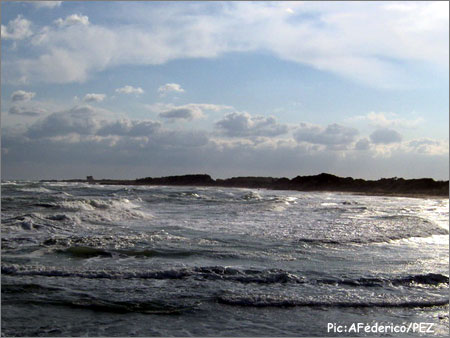 The Adriatic Sea is anything but calm. 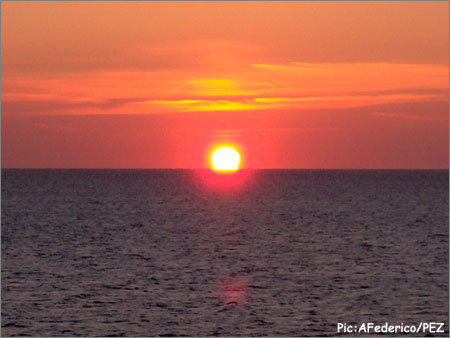 The sun sets over the Tyrrhenian Sea.

At the end of the story my life is a sort of Tirreno – Adriatico. Now is time to come back to cycling, to the new season. It is time to take new pictures, see new faces, experience new action. It’s time to talk with the riders and catch the deep stories of the bunch. So rest assured… it will not just be bike racing.

Stay tuned to PEZ for more news from Tirreno-Adriatico, starting today, and you can watch the racing action live on Cycling.TV starting tomorrow.