Team Toyota-United’s JJ Haedo scored a brilliant win of today’s Queen stage along the California coast. It was a full-team effort as ds’s Frankie Andreu & Harm Jansen plotted the winning strategy, then assigned their men to deliver the win. Pez was along for the ride and here’s how it unfolded …

– By Tom McManners of Discover Adventures
After congratulating my friend Frankie Andreu in the team area shortly after the stage 2 finish that saw JJ Haedo win his first stage as a Toyota-United team member, Frankie asked if I would like to join him in the team car one day. I jumped at the chance and arrived extra early to be sure to take it all in.

Today began with Frankie Andreu and Harm Jansen (Co-Directors of Toyota-United) reviewing Stage 4 route maps in the hotel room and developing a plan for the day. The primary plan was to have Justin England protect the sprinters from the coastal winds as the peloton raced south on CA Hwy 1 toward San Luis Obispo. Everyone else was to cover the breaks that had more than 3 riders up the road.

The team was in a great mood, laughing and joking around the team truck while each rider received a quick leg massage by Suzanne. Critically important before the boys left the staging area was their communications test.

Each of them donned their two-way race radio’s and did a sound check to make sure they would hear the advice from the coaches during the race. Eventually they took to the roads into Monterey, today’s stage start under Cannery Row. Our car was in the number 10 spot in the caravan, so Frankie and Steve affixed the indicating number to the car. After a long neutral roll-out, the race got underway, with action from the get-go.

It wasn’t very long into the race when our Toyota-United team car found the Mavic Neutral Support vehicle changing a rear flat for JJ Haedo. It appeared to go lickety-split, and just as we arrived, JJ was being pushed up the road. Later when the timing was better, JJ requested a wheel change from Steve, the team’s mechanic riding adjacent to me in the backseat. Steve whirled out, rear-wheel in hand and made a quick, uneventful switch and JJ sped solo back to the rear of the peloton.

The race was fast. I could tell that the action was different than previous days because both Frankie and Harm were excited about the events unfolding thus far. Harm road shot-gun first, and pasted the routes elevation sheet to the car’s console so that the two of them could anticipate every mile ahead for their team.

The route today couldn’t have been more beautiful. Unfortunately the 29 mph average speeds of the peloton heading into the first category 4 climb of the day didn’t allow the racers to witness the pod of dolphins jumping out in the Pacific Ocean, but we were thrilled with the sight from within the car.

Things started heating up on the first climb. Harm and Frankie feverishly wrote down race numbers as they heard them on race radio to learn who was in the first significant break of the day – no one from Toyota-United. After some internal discussion, for the most part they let the break run its course without directing the boys to move up the road, and eventually the break broke down.

No doubt it was a long day in the car, nearly 5 hours and 130 miles. Candidly, it isn’t all action in the car, in fact there are a few dull moments when kicking back is okay. This was evidenced when Frankie, now in shotgun, was able to rest his head a spell before the next break went up the road. After 2 hours of driving he was ready to pause a minute before the next strategy session began.

A two-man break started getting up the road around 30 miles from the finish. Frankie and Harm were watching this one closely and alertly. When the peloton passed about 35k to go, Harm and Frankie began strategizing; brilliantly I might add.

They radioed to Tony Cruz to drop back to the team car. When he road up along side, the strategy unveiled itself. They told Tony to pull two teammates, Chepe Garcia and Justin England to the front and have them start pushing the tempo. They told Tony that they were, “going to recruit some help.” The two-man break was at 1:50 with around 30k to go.

A Few Good Men
So Frankie and Harm set out to recruit some help. They pulled up alongside the T-Mobile car and shouted to the Director Sportif that they were sending two of our guys up front to push the tempo, could they as well? They nodded. And they said we should talk to Davitamon-Lotto. Instead, Frankie and Harm said “you guys get Lotto, we’ll catch up with Health Net.” The two-man break reached a maximum 2:25 when the 4 teams began positioning their men at the front to reel the duet in.

Health Net came alongside again, and visions of a boardroom came to mind as the Director of Health Net started negotiating with Frankie. “I’ve got one man up, I’ll put another man up if you add one more,” says the Health Net driver. “We already have two up there,” replies Frankie as they shout between cars. “You put three up there, and we’ll add another.” So the negotiation settled, with Health Net supporting their demand with a comment to the effect that ‘Toyota’s got the main sprint man and to hedge the bet, that’s the deal’.

In the team radio, Frankie directs his team to “keep it steady, time is dropping.” The gap dropped smoothly – 1:50…1:20…1:10. Perfect, the breakaway was coming back.

60 Seconds… And Counnnnnnnting
Frankie and Harm decide to sit at around a minute, but before they could talk to the boys, the time kept coming down.

The last sustained rise of the day starts. Frankie advises the team “a couple of kickers ahead that will go for 5k – keep that in mind.” His point is to keep some reserves in the tank.

Harm and Frankie discuss the final miles and they decide that they should leave it up to the team. They comment that “Healthnet has two and T-mobile has two. All these trains are moving to the front and making the gap disappear.”

So at this point Frankie and Harm decide to let the boys finish the race. During the final miles into town, they simply alert everyone to the tough turns ahead. “3k to the turn, 3k to the turn! C’mon guys, keep driving it!” shouted Frankie into the radio.

At 2k to go, the field is together. It was noted that the first sprinter to the final corner would win this race. Fast Freddie Rodriquez (DVL) hit the corner first, and JJ third. 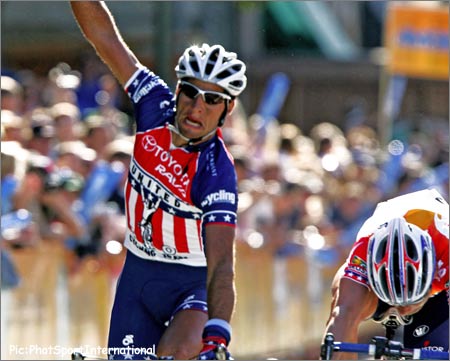 As the team cars got diverted, we heard over race radio that Fast Freddie won. A bit disappointed, everyone took it in stride. Moments later, race radio made the correction and euphoria struck the car. We all jumped out and high-fived everyone in the Toyota-United pit area.

JJ Haedo had won his second stage of the Amgen Tour of California. Toyota-United Pro Cycling Team was making an incredible debut. Wow!

At the press conference a reporter asked about the chase that was initiated on the two-man breakaway. JJ accurately informed them, “We started the chase. We were first to chase and the other teams started to help. I think the team did great. Our team stuck to the plan, and we won!”

This was an incredible day inside the Toyota-United team car. Thank you to Frankie and Harm for allowing me to ride with them. Steve, thanks for sharing the back seat with me. Sean Tucker (Owner) thank you for this incredible experience. Congratulations Toyota-United on your domination of Stage 4 of the Amgen Tour of California!

PezCycling’s Tour of California reports are filed in partnership with Discover Adventures Cycling Tours: Check their website to enter to win a trip to the Tour de Georgia.
Like PEZ? Why not subscribe to our weekly newsletter to receive updates and reminders on what's cool in road cycling?