PEZ caught up Team Type 1 yesterday as they continued to gather a full head of steam heading into the final mountainous stretch over the Appalachian Mountains and then into New Jersey. Spirits are incredibly high and the speeds are even higher – a record wants to be broken.

I called Phil for our daily update, but instead of Phil, I got my old teammate Joe Eldridge, it seems that Phil was working or something. I had to settle for Big Joe. Ha.

PEZ: So where are you?

Joe: Right now we’re somewhere in Illinois, about to be in Ohio. 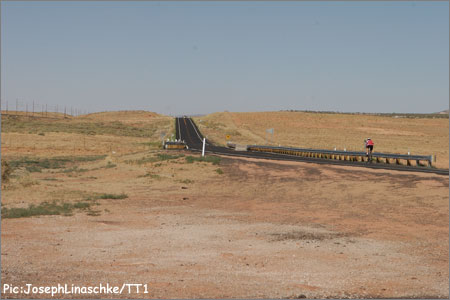 Joe: Will we pass you? We’re going through Troy and Athens in Ohio.

PEZ: You’ll actually come within 20 miles of me, but I’m going to bed. Some of us sleep.

Joe: It’s good, everybody is riding really well, our crew is just, like, huge, as far as taking care of us and keeping us going. We’re riding in the van just having a good time. 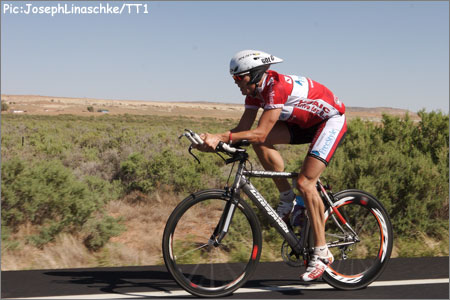 The average speed so far is upwards of 23 miles per hour.

PEZ: I hear reports that you’re about to catch the leaders on the road, Team Vail…

Joe: We’re about 30 seconds off right now, we’ve got JQ on the road, and Bobby Hyer is about to go, and one of them will make the pass, then Phil and I will solidify it.

PEZ: What are you guys averaging on the road?

PEZ: You are a wattage cottage.

-note: There’s a reason why Joe Eldridge is called Big Joe, it’s the most completely unoriginal nickname probably ever, but it, er, fits. 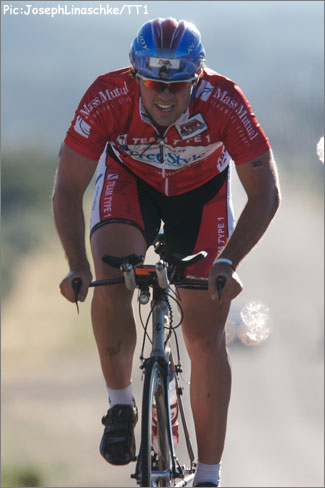 Big Joe lays down the power.

PEZ: Any rough spots of late?

Joe: We’ve been going for what now, 3.5 hours from our last rest? All in all, we’re getting about 4 hours of sleep, solid sleep, it takes about 1.5 hours to wind down, then we have to get up about 1.5 before… 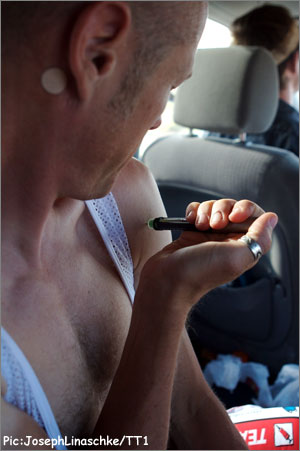 The running joke on Team Type 1 is of course, they’ve got the most needles, but a picture like this reminds that constant care and attention is an incredibly powerful tool in the fight to stay healthy.

PEZ: How much longer to go?

PEZ: So do you guys heckle your teammates on the road from the van?

Joe: Kansas was FAST, we went through this electrical storm with 25 mph tailwinds and 46 mph gusts; we were running a disc in the pouring rain at 30 mph.

PEZ: Anything cool happen of late?

Joe: When we were in Kansas riding at night in the electrical storm, some lightning started a brush fire that we got to watch for an hour or so…that was pretty cool.

PEZ: The hills of Ohio, West Virginia, and Pennsylvania are just down the road, what do you think?

Joe: We’re ready. We’re fresh and everyone is climbing really well. Most of us have ridden into more fitness. Everyone seems to be getting faster. Bring it on.

At this point, Phil finally gets done with his on the bike work and picks up the phone sounding like he just finished eating a nice dinner and not many minutes at threshold, 4 days into arguably one of the hardest endurance events in the world.

Phil: Feeling good, feeling real good. We had collectively a bad day yesterday, the first four hours were fantastic, and then we had some traffic issues, which got in our heads, and we kinda had a little mental crack.

For about 90 minutes we were fighting every pedal stroke, but you know what, every team has a bad time at some point, but we pulled it back together, but today we’re going faster than we’ve done all week. It speaks for not only the team, but the crew to get us through the tough spots. 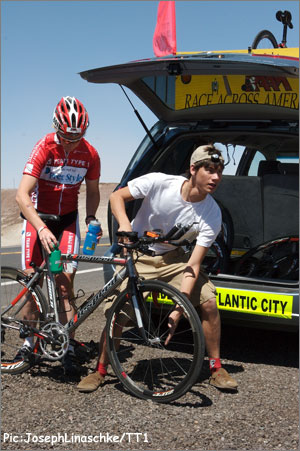 Vail had two hours on us last time we spoke, now, when I pulled off my bike back there they have 28 seconds. Now, after 2400 miles of riding, we’re withing half a minute of each other.

PEZ: Was this the first time you caught Team Vail?

Phil: Actually no, yesterday, we made the first pass on Vail, we passed em then they passed us back – we passed em right as we got into a city so it turned into stoplight crit hell (remember RAAM riders have to obey ALL traffic laws). So we just sat there at this traffic light. Vail got in behind us, and they’ve got one guy that’s really good on flats, so he attacks us. I mean, we’re like 1800 miles into the race and this dude, straight up, attacks us, last lap crit-style for the win. 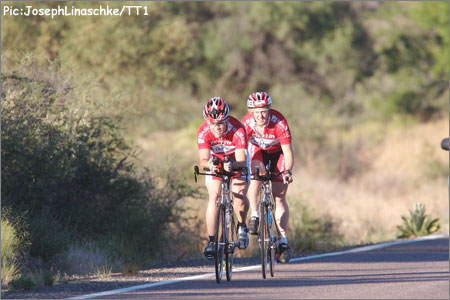 The team wasn’t fortunate enough to make the first catch of Vail on the open road.

The thing is, it paid off, because he made it through a red light and Joe got stuck at the red light from Hell. Seriously, it had to have been the longest red light I’ve ever seen. He waited seriously two minutes in the middle of nowhere, in the middle of the night. We had a lot of small things go wrong that shift. Then again, after we had fallen apart and pieced ourselves back together, we had our strongest pulls of the race so far.

PEZ: So what happened after that?

Phil: They opened the gap back out to six minutes mid-shift, but then we closed it down to 1 minute at the end. Back and forth back and forth, at the beginning of today they had 9 minutes, and now we just passed em, right now, damn!

No, just kidding, we didn’t pass, we’re 50 meters behind.

[Ed. note: There were repeated points of almost deafening noise as the team rallied around the riders on the road encouraging them, cheering, jeering, coaxing – it was an amazing event to hear.] 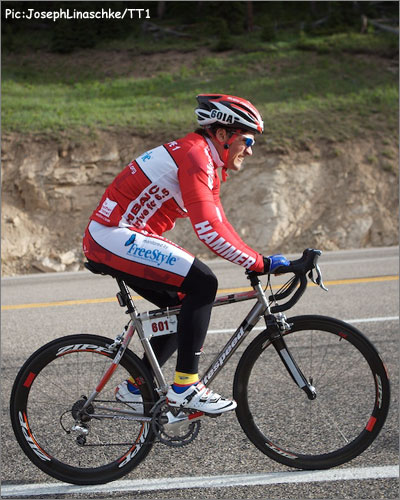 The race is about to head back into the hills…

We’re excited, we’re not only smashing the corporate record, but we’re coming through towns all over the country and groups of diabetics are coming out and telling us how inspirational our journey has been for them. I mean, they’ve said that even if we were dead last it would be a big deal, but here we are – we’re not just riding this, we’re going for the win and the record.

I had 5 people tell me that we had no chance of beating Vail, but here were are, neck and neck – it’s special.

Parting Words From Phil
Sit tight till Tuesday about how TT1 came through. We could NOT be doing this without our sponsors – we’ve got the fastest stuff for every situation. The Litespeed bikes have been so awesome – we’ve been the best in the crosswind sections, but in that storm in Kansas, in one-100 mile stretch we made up 45 minutes! We had the right wheels, the right nutrition, the right bikes, we were aero the whole time. Like I said in the previous interview, Hammer Nutrition has been the best. We’ve been racing non-stop for days and no one has cramped yet, and we’ve been hitting stretches of 98 degrees.

As I hang up with Phil, there’s a thunderous round of applause and cheering, and then Phil: Their guy cracked! We made the pass, we made the pass!

We’ll be talking with Team Type 1 tomorrow again to get one final update.

You can get nearly up to the minute updates about Team Type 1’s progress as they head eastward across the US – have a look at their excellent Race Blog.

Check out the RAAM site for more overall information, as well as up to the minute updates from all of the competitors.

Get a Wristband! The red and white is so hot right now.