On paper it might have seemed a done deal, but if it weren’t for Chris Baldwin’s dumping it in the final corner, the result could have been different…but it wasn’t, Baldwin fell down, and David Zabriskie, he of the new beard, took the US TT Title. PEZ was there for all the fun…and walking.

Of course, this caused me to be commonly late, so I arrived at the starting area in what has to be the northernmost point in South Carolina, and tried to crack the iron stares of riders who appeared to be on their way to their doom. And they were…would you be happy if you had 20 miles of up and down up and down Blue Ridge Mountain mean-ness in front of you?

Since the pallid faces of the riders were particularly dissuasive to conversation, or the fact that my repertoire of questions centered on…so, how do you feel today? What do you think about the course? I decided it might be better to talk to someone else…like Jonas Carney, former USPRO Crit champion and now DS for the Kodak Gallery/Sierra-Nevada Team. 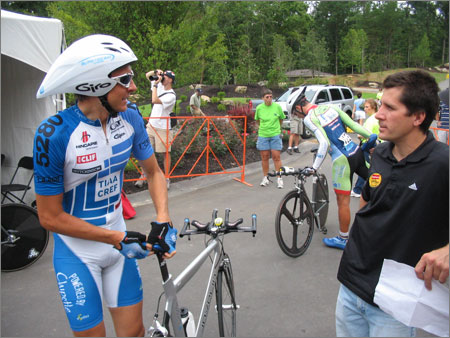 PEZ: Hi Jonas, (he says hi back) who do you think from Kodak/Sierra-Nevada might be in for a chance to win today?

JC: Definitely Ben Jacques-Maynes. If he’s got his form dialled in, he could be Top 5 for sure. He’s been training on his own lately, and he’s really good at getting ready for TT’s like this. If he’s got his training right, which I’m guessing he does, he’s definitely our best bet.

More from Jonas Carney later…he had some good tidbits to offer. 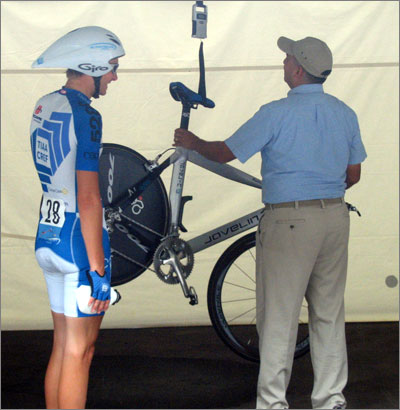 TIAA-CREF rider and former U23 Time Trial World Champion, Danny Pate, didn’t seem too concerned about what was in front of him. He joked around with everyone within earshot and then went onto finish 6th. Ho hum.

Mr. Carney was intrigued by the fact that Pate had no follow-car… “You’ve got a former U23 World Champion here with no follow car? Something must be up. He just got back from Europe and he looks like he’s got a cold…then again, Danny Pate with a cold, tired, or whatever could go and light it up anyways.” 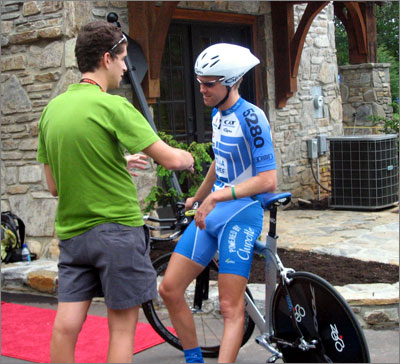 After pausing for a moment, there walked up Saul Raisin. Saul is looking better and better by the day. 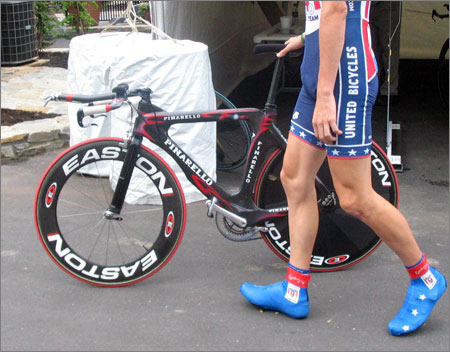 Chris Stockburger is a crazy talented young rider who didn’t break any records today, but rocked a mean looking TT bike that is definitely not Toyota team issue. He’ll be a rider to watch for the future. 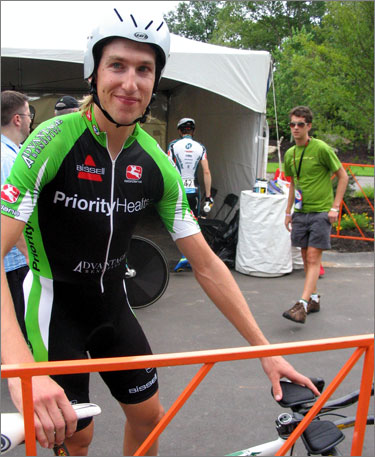 Tom Zirbel was the PEZ-Pick today, as well as former ToolBox contributor, Frank Overton’s. Zirbel is a time trialling sensation, even going so far as to get the better of Chris Baldwin this year. Overton, along with his coaching endeavours, is trainer for the Priority Health team and he is in Greenville for USPRO – he liked Zirbel’s chances: “I think he’s gonna win.”

Zirbel didn’t end up winning, but 7th place, just a few seconds out of 5th is NOT a bad place to be… 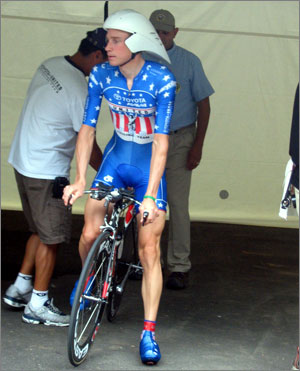 Chris Baldwin was chillin for a minute before his TT, so I popped out a question: How do you feel about today?

Awesome. I wish I could have been there to ask him about his day after he dumped it in the last corner…he probably isn’t too happy about that. 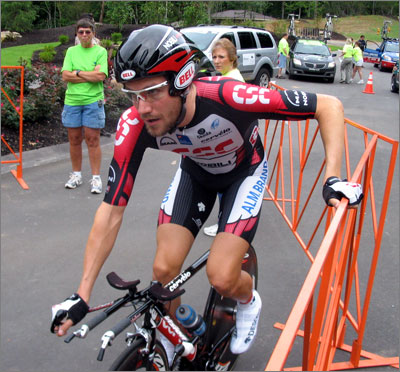 Dave Zabriskie, the big time favorite on the day, was sporting a mountain man beard, as well as a nicely chopped up CSC skinsuit – no elastic for Zabriskie. 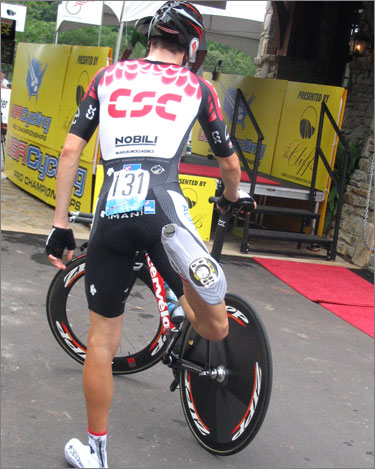 Zabriskie got ready for his TT with some big kicks. I think he was channelling the energy of collegiate football’s first weekend…for the big kick-off. 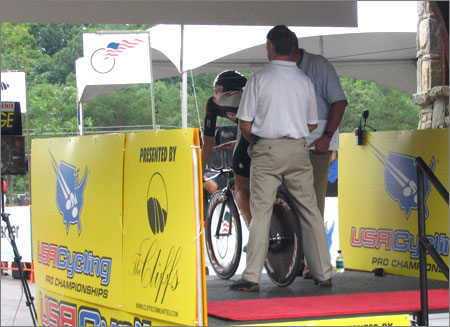 He ended up starting, and riding away. 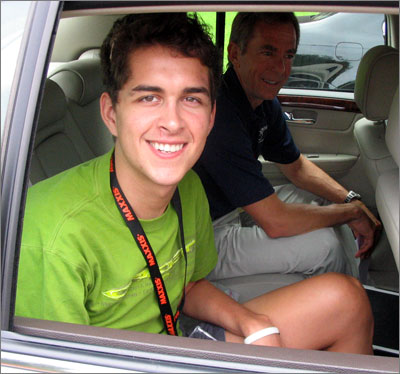 Caught up with Saul again, but he was leaving to follow Dave Z. He said he’d talk to me at the finish line, but I never made it there. 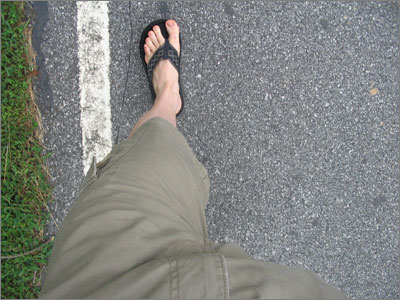 I was directed to park in a gigantic field and told that ‘it’s only a quarter mile up the road.’ Yep, the race was a quarter-mile up the road, but the finish was about 3 MILES distant. 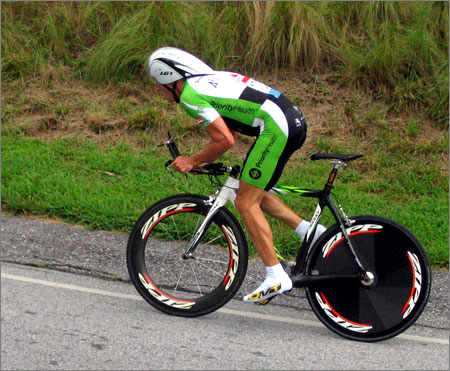 I started walking, but realized that there was no way, barring a miraculous air-lift from a helicopter above, that I’d be seeing any finish line, so I did the next best thing and took pictures of riders being punished by a mean 400 meter hill, that had two volunteers arguing as to whether it was 14 or 16%. They should have asked the Priority rider. 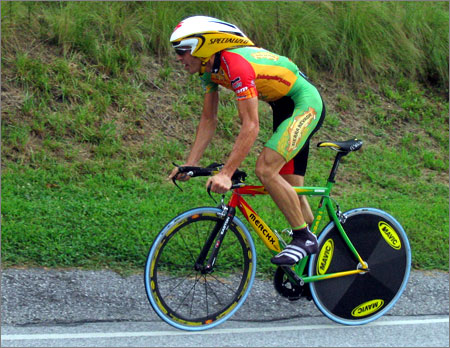 Ben Jacques-Maynes came by looking ice cold, but he wasn’t going quite fast enough today to shoot for Top 5. He ended up 15th. Still a damn fine ride. 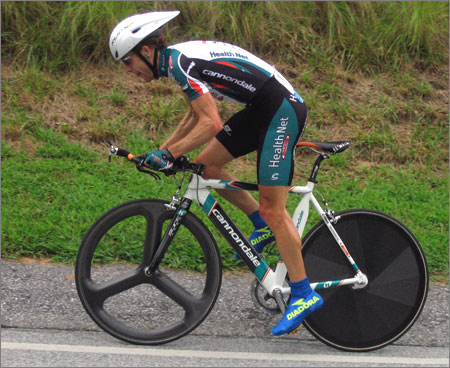 The age-less Scott Moninger came pounding by a little bit after that. The ever-consistent nearly-40-year-old finished just in front of Jacques-Maynes in 14th. 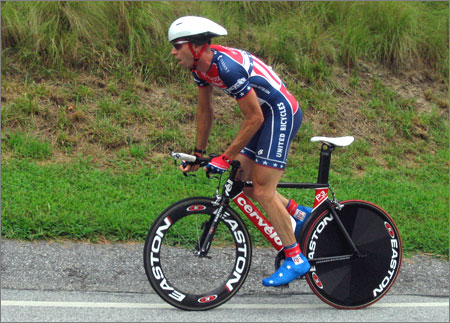 Moninger’s former HealthNet teammate, and current USPRO Road Champion, Chris Wherry got to moving quickly today – he finished a solid 9th, but of course, one has to think that his eyes are set firmly on a title-defense come Sunday. 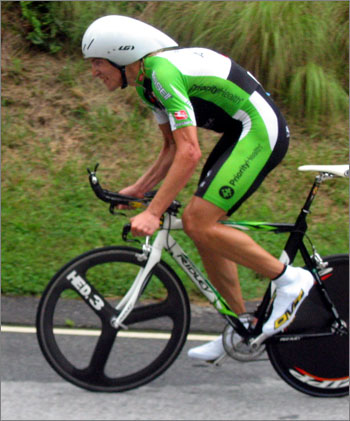 Tom Zirbel came trucking by soon after churning a gi-normous gear. Seriously. It hurt my knees to watch, but he went fast. Overton was hollering at him from behind…you’re almost there, you’re almost there. And I got all out of breath just listening. 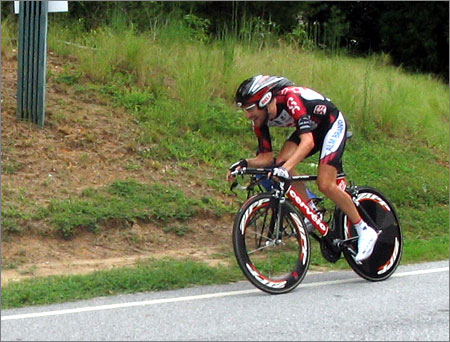 Unfortunately, or perhaps fortunately for Mr. Zirbel, he started right in front of the Big Z, Dave Zabriskie. The idea of DZ breathing down your neck in a TT does not seem pleasant. Zirbel rode well though and avoided the ignominy of getting caught with ease. Zabriskie kept turning up the gas on the second half of the course after hitting the time check 8 seconds adrift of Baldwin. 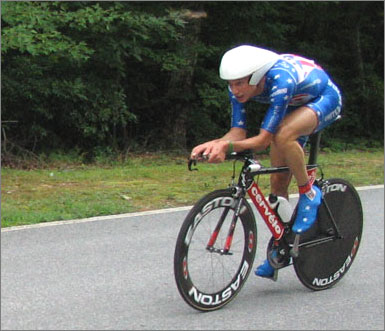 Chris Baldwin came hauling by with less than 2k to go, and at this point he must have been pretty close to locking up the win…except for that damn last corner. The only thing he locked up there was his rear wheel. Unfortunate for Baldwin, but still a good ride.