The women’s road race in Austria was a real war of attrition and it was a lady that loved the World Champ’s stripes so much she just had to have two candy striped jerseys this year that took home the gold. Marianne Vos, this year’s World Cyclocross Champion and only 19 years old added another jersey to her wardrobe in a strong display in Austria today. 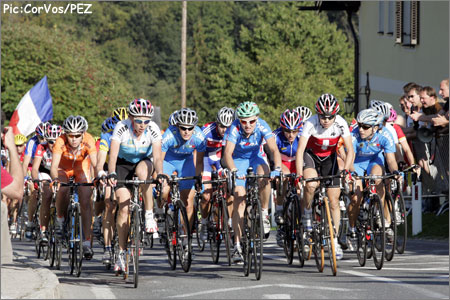 There wasn’t too much drama in the early going.

Under sunny Austrian skies 136 women from 32 different nations kicked off the action in Salzburg as they started their 133km battle. As expected, the start of the race was a nervous affair with numerous small attacks, but these were quickly extinguished by the strong teams of Italy and Germany. Meanwhile at the back of the pack, things were strung out with the weaker riders dropped as the peloton began to thin out significantly. The big surprise from the first two laps was the abandon of defending champion, Regina Schleicher. The German had been in top form in recent weeks but has been suffering from stomach problems for the last 48 hours and was unable to recover in time for her title defense. 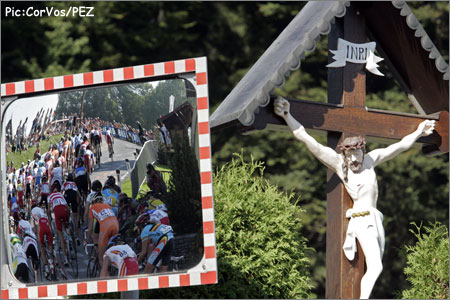 A typical sight in the mountains of devoutly Catholic Austria: a crucifix and a mirror to help with the curvaceous roads.

The Germans were now one rider down after Schleicher’s abandon but no one was hanging around to offer their sympathies as the pace picked up in the main field and the first serious attack of the day went. There was 90km to go and it was Canada’s Anne Samplonius who launched the move and she was quickly joined by Natalia Boyarskaya from Russia. These two worked well together in their Russian/Canadian alliance, but with so many large nations not in the break, would these two be given free reign? 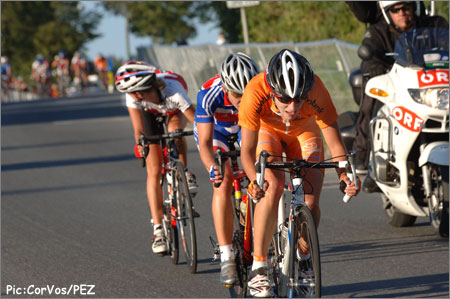 The trio of Brandli, Cooke, and Vos got away twice during the race, but couldn’t stay away.

The answer clearly was no, as the break never gained more than a minute and with just under 50km to go the brave escapees were caught. It was 25kms later when the real smackdown occurred in this race as World Cup winner, Nicole Cooke and Switzerland’s Nicole Brandli forced the pace with Marianne Vos (Netherlands) joining them over the climb. There was still one lap to go though and the trio survived out the front for only 5kms before 12 other riders caught them. 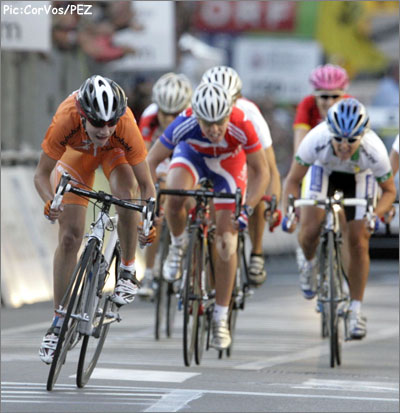 There was no stopping Vos in the finishing sprint.

With the rest of the peloton well out of the race it was down to these 15 women to decide the race and with only 10km to go, the trio from the previous lap, Cooke, Brandli & Vos went again. In almost an exact repeat of the previous lap the trio were caught once again with 5km to go and the race was going to come down to a small group sprint between the front 15. 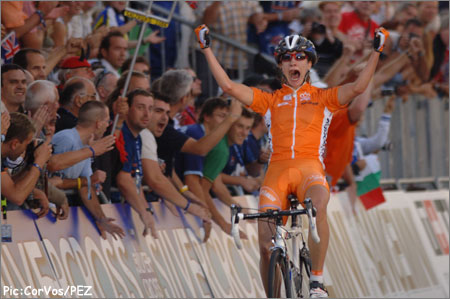 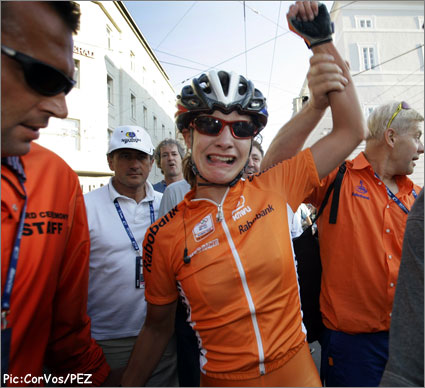 Most riders were marking Wood (Australia) and Cooke (Great Britain) for the sprint but it was the surprising 19 year old Dutch sensation, Marianne Vos who showed the other girls a clean pair of wheels taking the sprint comfortably ahead of Trixi Worrack (Germany) & Cooke. 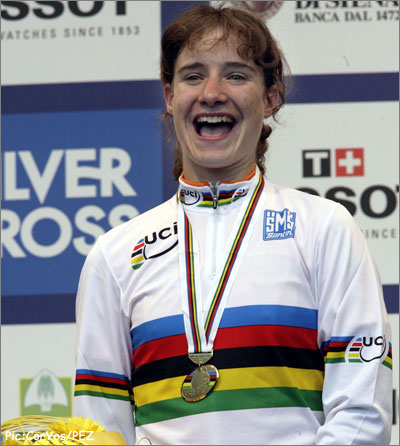 Hey hey hey! Two World Championships in one year! Sounds good to me. 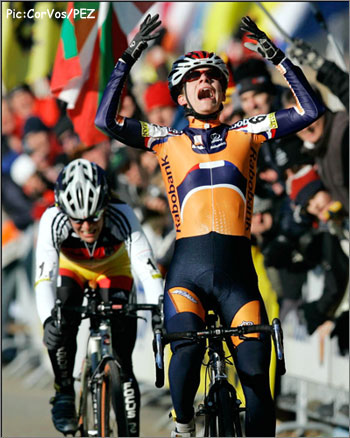 A super quick sprint for an extremely talented youngster who doesn’t even ride for a professional team! I’m sure the offers will be coming thick and fast now for Vos with TWO World Championships jerseys this year. What a year! 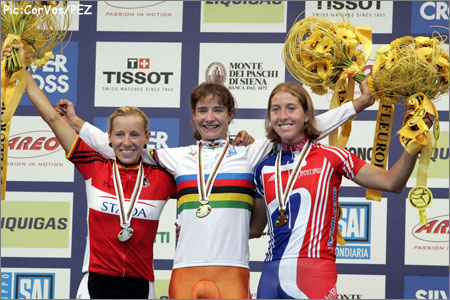