The first races of the World Championship races are done and dusted and it’s rainbow glory going to an American and a Belgian after impressive rides in the Women’s Elite and U23 Men’s time trials in sunny Austria today.

Women’s Time Trial
First event of the World Championships was the 26km women’s time trial held on a tough, undulating circuit through the picturesque Austrian countryside. With the first half of the race being primarily uphill it was essential to get a good start and then to maintain the pace through the easier back section. Not to say the back section was easy though, as the Czech Republic’s Lada Kozlikova found out. Kozlikova was the leader at the first intermediate check after climbing well over the first ten kilometers, only to fade badly at the end and eventually finish 8th. 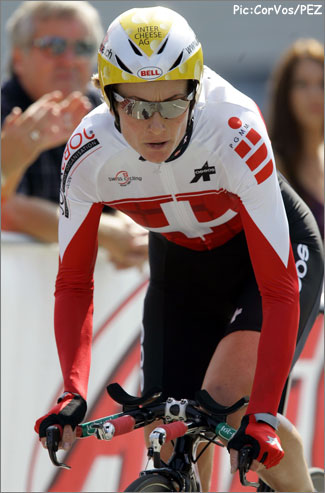 Defending Champ, Karin Thuerig, mounted a good effort, but had to settle for 2nd this year – she’s still got Ironman Hawaii on her agenda though…

It was the second placed rider at the intermediate check, America’s Kristin Armstrong who regulated her effort the best storming home over the final kilometers to take a much deserved world title. In doing so, Armstrong beat Switzerland’s ironwoman, Karin Thьrig into 2nd place with Christine Thorburn rounding out a great day for the U.S by taking the bronze medal. Ex–Triathlete turned pro bike racer, Armstrong was a deserved winner of the title showing the style, composure and strength of a rider who was clearly focused on her goal and had the stamina and power to back up her convictions. 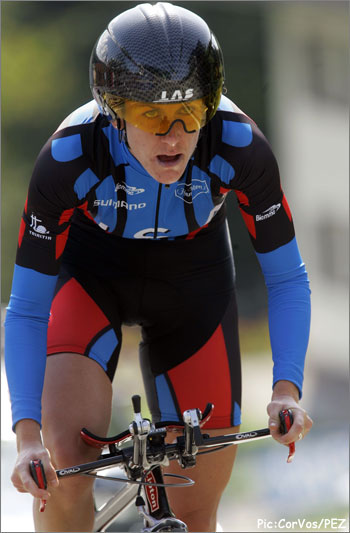 Kristin Armstrong rode an incredible TT today to take the biggest win of her career. Not a bad season: National Road AND TT Champ, as well as World TT Champ. It might get ridiculous if she won the RR too!

It’s been a great year for Armstrong after winning BOTH the road and the time trial titles at the National Championships in July she has now proved to the world just how strong she is. It was a great performance by a competitive, focused athlete and also a sensational showing by the U.S.A team taking 1st, 3rd and 10th in the 37 rider field. 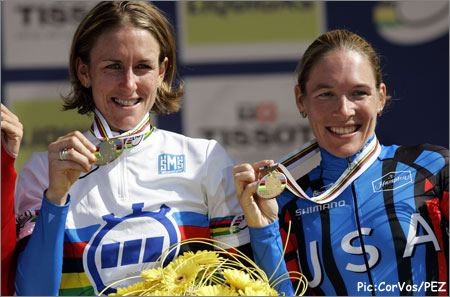 Always fun to share the podium with a teammate! Christine Thorburn and Kristin Armstrong show off their medals.

Young Guns Battle
The U/23 Mens Time Trial was the 2nd race on the calendar for Salzburg and it was a much anticipated affair with 59 of the best young riders in the world taking on the Salzburg hills. Previous winners and place getters in the U/23 time trial often go on to have impressive professional careers so this race is an extremely prestigious title indeed. Some riders already have contracts with big teams for next year and want to show their new bosses what they are made of, whilst other riders are without contracts and are trying to impress every director sportif and talent scout that attends the Worlds. 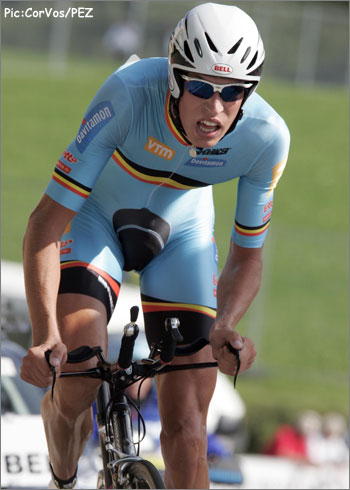 Facing the young guns in their battle for time trial gold was a 39.5km circuit using the same roads as the women’s course in the morning, plus an extra loop. Effectively the extra loop meant that the first 30kms was full of climbing and then it was all downhill for the final 10km. Clearly the first 30km would be the key to this race and it was the big Belgian, Dominique Cornu who impressed early with the fastest time at the first check beating race favorite and last year’s Champion, Russia’s Mikhail Ignatiev into 4th place at 19 seconds after only 10kms travelled. It was the same story at the 2nd check after 24km, this time Ignatiev had moved up to 3rd behind France’s Jerome Coppel but the Russian was now 39 seconds down and Cornu looked like taking the title.

In the end nobody could get close to Cornu on the downhill run home and it was a clear victory to the Davitamon-Lotto bound Belgian. A true time trialist on both the road and the track, expect to see this lanky Belgian driving the front of the pro peloton to set up the sprints for McEwen next year. Taking the minor medals was Ignatiev for Russia with Bronze going to French talent, Jerome Coppel. It was a bit of a sad day for the Anglophones with no American or British riders in the top 20 but luckily the Engish speakers were saved by two riders from down under…no, not Australia, but New Zealand! Logan Hutchings came in 7th only 1m25s down and fellow Kiwi, Peter Latham 9th only 1m29s behind. A great day for the small nation of New Zealand and hopefully these two can continue on and even make the ProTour in the coming years. Crйdit Agricole’s New Zealander, Julian Dean is getting a bit lonely there sometimes I think…