The Rainbow Jersey has been won by Bettini and lost by everybody else, but there’s still work to do. There are three classics to fight for, The Championship of Zurich, Paris-Tours and the final Monument of the year – the Giro di Lombardia. First up is Zurich and PEZ gives a little history of those 240 kilometeres around the hills close to the city of gnomes and bank vaults.

The race was first held in 1914, we make this the 91st edition but some folks say it’s the 92nd – whatever…yawn. In a surprise of massive proportions, most wins does not actually belong to Eddy Merckx, rather home boy, Henri Suter who won six times between 1919 and 1929. 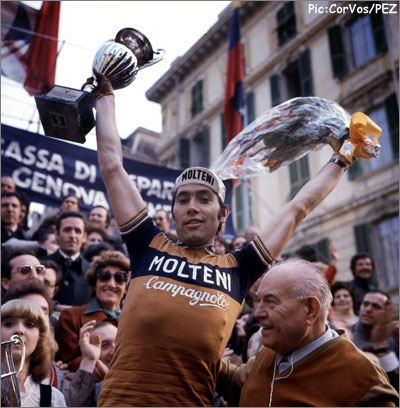 Is it an error in the record-keeping? Nope, Eddy Merckx never actually won Zuri-Metzgete.

The legendary Eddy never actually triumphed here, one of only a handful of Europe’s great races which fail to appear on his palmares at least once. Eddy got closest in 1975 when he was second to Roger De Vlaeminck of Belgium. 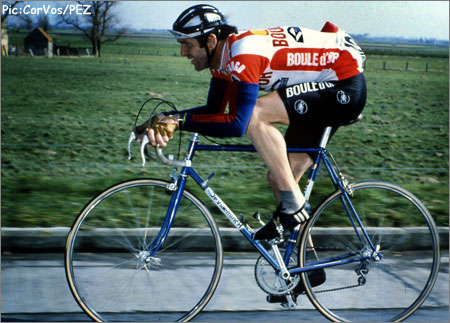 De Vlaeminck wasn’t only Mr. Roubaix…he won a few other races as well.

Of the current generation it is newly-crowned world champion, Paolo Bettini who comes out on top with wins in 2001 and 2005. The last home win was in 2000 with Laurent Dufaux (yeah – the Festina guy). 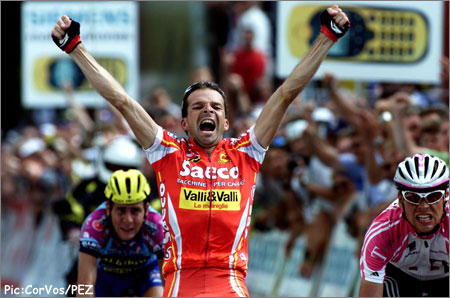 Homeboy Dufaux got himself a win in 2000.

As far as I can establish, Zurich gave Poland her only classic win in 1999 when chunky Grzegorz Gwiadowski of Cofidis pulled-off the surprise of the year; nobody had heard of him before that, or since! 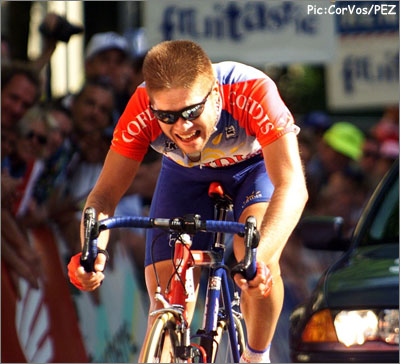 Grzegorz Gwiazdowski put Poland on the map for about four seconds when he took arguably the most improbable win surely in the history of Zurich, and perhaps bike racing.

As befits a nation where bank accounts are held for the rich from every country on the planet, the role of honour over the last 25 years is cosmopolitan with 12 nations represented. – Australia, Belgium, Canada, France, Germany, Holland, Italy, Poland, Portugal, Russia, Spain and Switzerland. 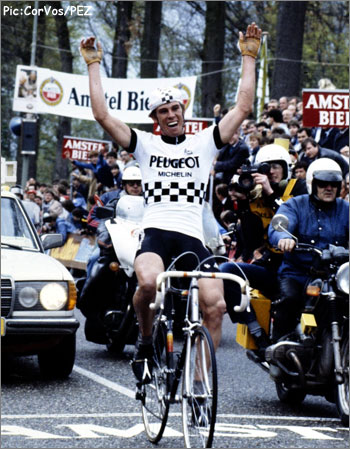 Phil Anderson got himself on the Order of Merit in Zurich with a win in 1984.

Phil Anderson of Australia became the first English-speaking winner in 1984 and was in fact the first Anglo to even stand on the podium. That’s if you discount New Zealand’s Eric McKenzie who ‘won’ in 1982…until they analysed his urine sample. The only other English-speaking winner was another Commonwealth rider, Steve Bauer of Canada in 1989. His win gave him a full-house of Zurich podiums; he was 2nd to Portugal’s Acacio Da Silva in 1986 and 3rd behind Ludo Peeters of Belgium in 1985. 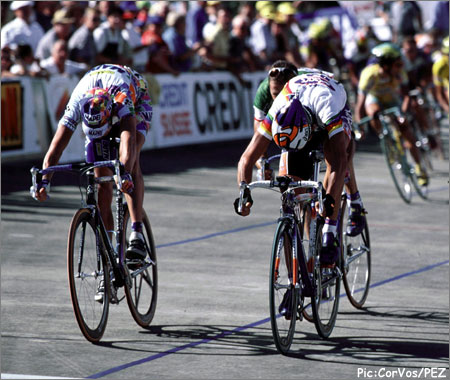 Zurich has seen some impressive finishes, like this one between Michele Bartoli, Andrea Tafi, and Frank Vandenbroucke in 1998.

In the days when Zurich wasn’t far behind Le Tour on the calendar and American stars actually raced beyond the Champs Elysees they fared well here. Greg Lemond was 2nd behind Charly Mottet of France in 1990 and a precocious Lance was 2nd in 1992 behind a guy he would get to know better in the years to come – Viatcheslav Ekimov of Russia. 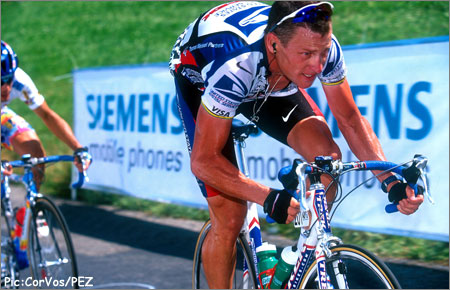 Mr. Armstrong had a few go’s at Zuri-Metzgete, but never managed the win.

A decade later, Lance was back on the podium – 3rd to Dario Frigo of Italy. Completing the list of Anglos was Max Sciandri’s 3rd behind Johan Museeuw of Belgium in 1991. He was actually Italian back then, but he’s British now and we need all the results we can get. 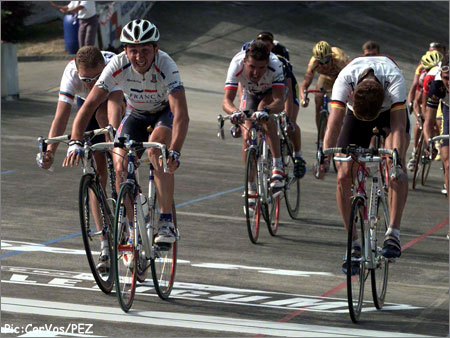 Ahhh, if he only knew how many 2nd’s were to come – this was Ullrich’s first in 1997 – behind the impressive Davide Rebellin.

Biggest ‘nearly’ man at Zurich has to be Jan Ullrich, second four times, in 1997, 2000, 2001 and 2003. That was back in the days when he actually used to bother to try and salvage his season with a late season ‘burst on the banjo’ (copyright David Duffield).

Favourites for 2006? It’s hard to go past Bettini, but any of the guys ‘in the mix’ at Salzburg could win it, we like Samuel Sanchez of Spain and Euskaltel.

How About A Closer Look At The Race Course 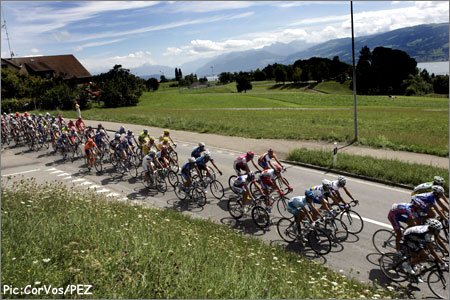 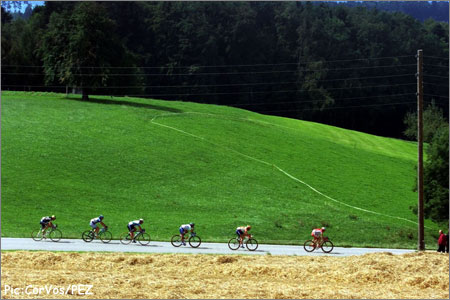 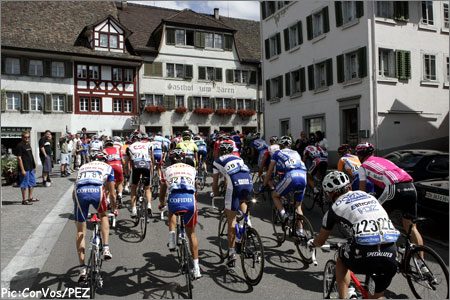 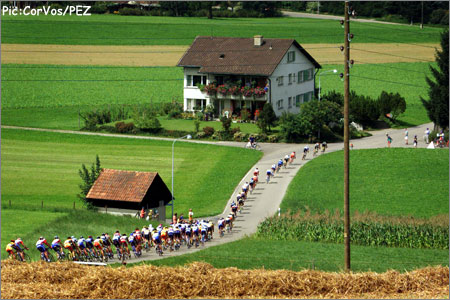 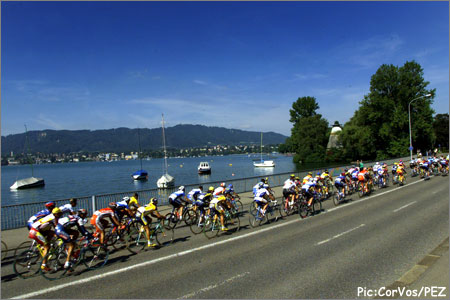 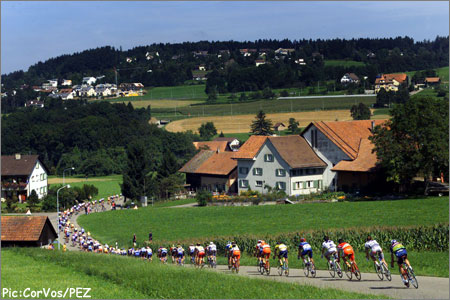