The Championship of Zurich, or the Zuri-Metzgete, will be an entertaining race as always – with a number of heavy hitters coming to Switzerland on great form. But really, how tough can a race beside the beautiful Swiss lake be? We rode a couple laps to see for ourselves…

In 2005, the race was dominated by one Paolo Bettini, who had just left yet another frustrating World Championship Road Race behind him, and in turn went on a ridiculous tear over the final weeks – winning at Zurich and then again at Lombardia. Quick.Step rode a perfect race, putting 5 riders in the decisive 13-man move. From there, it was all Bettini, all the time, as he quite simply rode away and embarrassed the world’s best by many a minute.

Of course, this year, Bettini finally got his Rainbow Dream come true, and he’ll once again be on the start line in Zurich on Sunday – of course he’ll be a very heavy favorite. 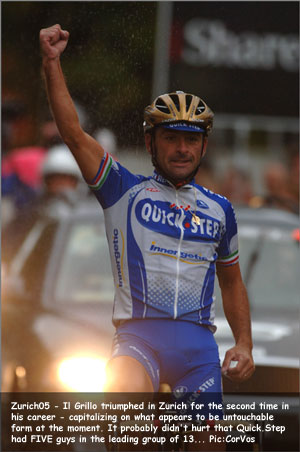 This year, like last year, the ProTour overall is all but decided, this time in favor of Alejandro Valverde, who will actually not be starting, citing fatigue. Valverde’s lead is darn near untouchable, so taking the weekend off isn’t a bad idea.

As for the contenders? There are more than a few that will be matches for Bettini in 06 – namely the likes of Vinokourov, Gilbert, Millar, Ballan, DiLuca, Paolini, Schumacher, Wegmann, Evans, Schleck, Kroon, Cancellara (maybe?). The field is stacked – but without a doubt, Bettini is the man to beat.

Zuri-Metzgete will be for the second year in a row, just one week after the World Championships, but it’s evident that the the tough parcours and strong field should lend itself to a great day of racing, and hopefully avoid the bunch sprint of 2004 (well, unless your name is Flecha, because that was very nice to him). To get an insiders view of this Sunday’s proceedings I decided to investigate further & ride the course myself.

The bunch climbs the main obstacle – the Pfannestiel – in 2003.

Here are the facts of the course as seen from the saddle:

The race is 236.6km and is a multi lap format that includes 5 times over the course’s highest climb, The Pfannestiel. The race starts pleasantly enough with a nice 3km flat spin along the lake. This nice leisurely ride is quickly forgotten however as the course then takes a sharp left turn and heads up into the Zurich hinterland.

Lots of hills, but not so steep. The highest point is 329 meters above the start in Zurich, still enough for attacking.

The first climb is called the Forch (672m alt) and it is quite a steep beast that will quickly bring a halt to any morning gossip going on in the peloton. This climb is then followed by a quick descent & before you know it, you’re climbing again. There is no official name for this particular climb of approx 2km in length – but I call it the Pre-Pfannestiel.

The Pre-Pfannestiel may have Zuri-Metzgete virgins in the peloton thinking they were actually on the Pfannestiel – but they’ll be sadly mistaken.

After cresting this tough little climb, the course descends again before finally tackling the Pfannestiel (729m). After reading the press reports & hearing the rider’s stories you would think the Pfannestiel would be an ugly beast, but in truth it’s not.

Approximately 3kms in length and most likely to be climbed in the 53×21 gear the climb itself is actually relatively gentle – as far as climbs in Switzerland go!

The real killer to this race though is in the numbers: Kilometers: 236.6, and the number of times these climbs are done: 5. These numbers may not mean much to those safely tucked inside their cubicles, but from the saddle it’s a long day and a lot of climbing!

Although the climbs aren’t big, the frequency of them and the fact that there is very little flat road on the entire circuit means that this race will be a real race of attrition, with a strong chance of a solid climber getting the victory.

Our man makes his way up the Pfannestiel.

The only handicap on the course for the pure climbers however is the distance from the top of the Pfannestiel to the finish line. First, there is the descent of approximately 10kms and then there is the completely flat run home along the lake of 7kms.

In 2003 an excellent late attack by Rabobank’s climbing machine, Rasmussen was brought back and the victory went to a tactically savvy Daniele Nardello in an attack only a few kms before the finish.

Last year, numerous attacks were launched by any and all in the elite selection, but all were brought back by the tenacious work of Paolo Bettini’s teammate, Patrik Sinkewitz – in the hopes of setting up the recently crowned Olympic Champion.

Lots of hills, but not so steep. The highest point is 329 meters above the start in Zurich, still enough for attacking.

Will the race come down to a chaotic small bunch finish, or will the recurring theme of a late move (Nardello and Frigo for example) going off the front of a select group repeat itself? After seeing and feeling the course first hand, my money is on only a small group still being at the front the 5th and final time over the Pfannestiel. Who actually wins from this small group could come down to who has the strongest team and the most numbers in the final group. With such a flat run to the finish, team tactics and possible leadouts could be crucial so I would be looking at teams like CSC and Quick.Step to have the numbers at the finish.

Whatever the case, it should be a thrilling race, so stay tuned and keep it PEZ!