Not to blow our horn too much – but hey – we called it: tall, slim Asturian, Samuel Sanchez (Euskaltel) today won his first classic – The Championship of Zurich – in the grand style – ‘en seule’ the French say, or as we say in English, ‘in solitary splendor’.

The in-form Vuelta stage winner comes from Oviedo in Asturias, on Spain’s
green northern coast so he would be well-used to the rain which dogged much of the six hours-plus he spent in the saddle. In the final time trial of the Vuelta only Vinokourov could beat Sanchez, by a mere six seconds, and it was the man on the black, white and orange Orbea who forced the crucial four-man escape inside the last kilometre of last Sunday’s elite world championship in Salzburg. His race-winner was a reprise of his Vuelta stage win; attack at the top of a tough climb – in this case the Pfannenstiel with around 12 kilometres to go – consolidate with a dare-devil descent then turn the pain switch to 11 on the final run-in. 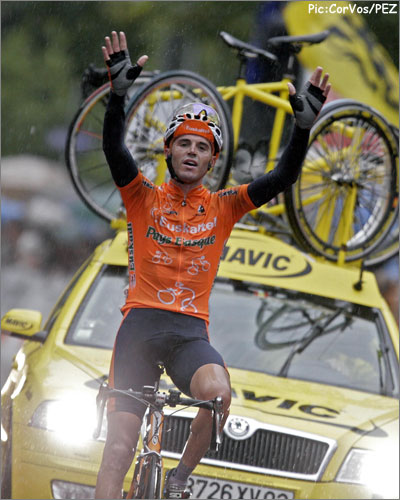 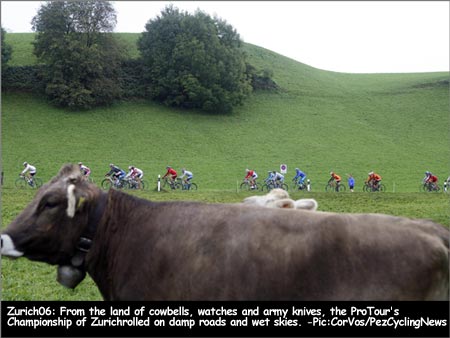 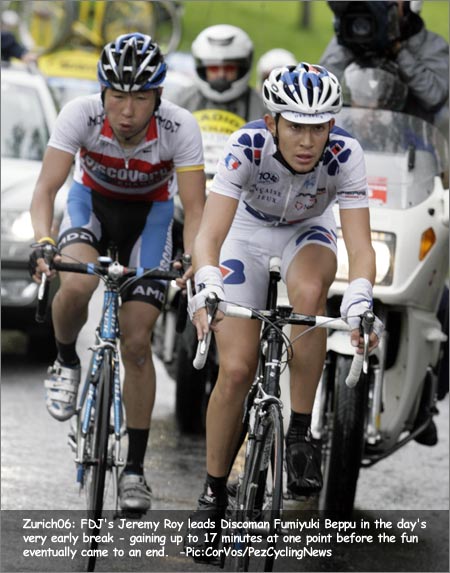 This group had morphed from the attacks and counter attacks which had come
after the obligatory early suicide break was absorbed. In this case it was a cracker – 155 kilometres from 25 K out 180 K by Jeremy Roy (France & Francaise des Jeux) and Fumiyuki Beppu (Japan & Discovery).

Any thoughts of CSC playing the ‘one-two’ card were dispelled when gravity
finally caught-up with the big Swiss ‘chrono-man’ Cancellara on the last
ascent and the rest were simply unable to react to Sanchez’s attack. He demonstrated exemplary descending skills and as the road leveled-out it
was one against four as Cancellara came back to the group on the saturated
descent. 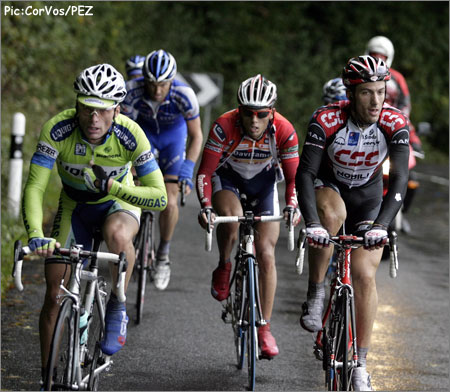 The four worked well together, all realizing they were chasing places of honor rather than champagne and (wet) kisses from the podium girls until they caught the Spaniard; who had himself on the rack as his low-cadence gave away the size of the gear he was turning at 50 kph plus. All the way in the gap looked bridgeable but the narrow-wasted Basque was just going too quickly to be reeled-in. 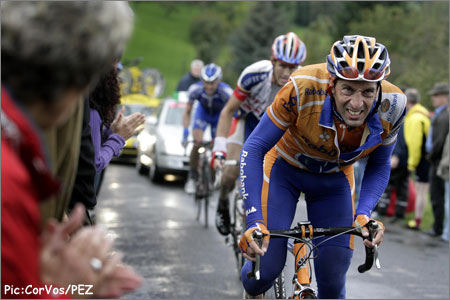 With one kilometre to go the chasers realized that the bird had flown for good and began to stall for the sprint. Meanwhile, Sanchez covered his eyes, turned-up the brim on his Euskaltel hat, pointed his index fingers skywards then punched the air as he savored his first classic win. 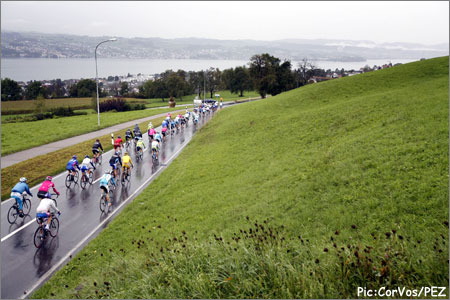 Boogie led out the sprint for second but Stuey’s legs haven’t forgotten all that track-work and the Aussie easily got the better of Rebellin with the Dutchman fourth and the hard-working Cancellara fifth. 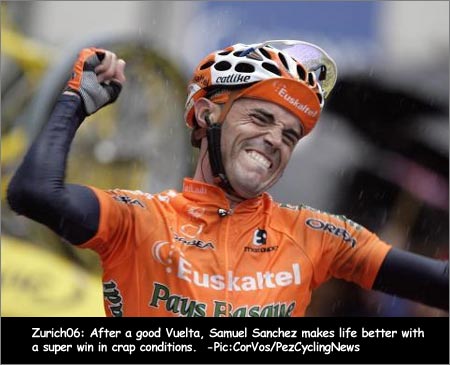 As Sanchez sat and cried with joy as he awaited his bouquet, the bunch struggled-in through the murk with former Italian champion Christian Moreni
(Cofidis) proving best at water-sports. Last year’s winner and current world champion, Paolo Bettini decided that he needed to get home early to get that rainbow jersey laundered in plenty time for next week’s Paris-Tours and failed to finish.