The Amstel Gold race is distinctive for three reasons: it’s the youngest of the north Classics at only 41 years, it’s named after a sponsor instead of start/finish towns, and it’s got 31 tough hills. PEZ pre-rode the course, and it’s a good thing that sponsor is a beer company… 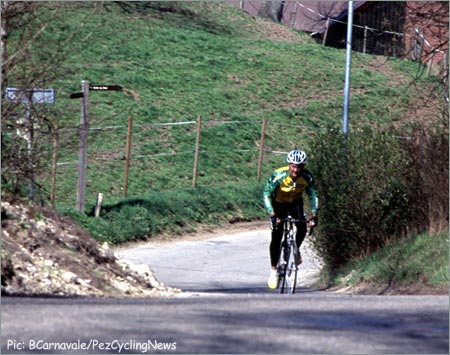 Even on the computer screen this looks steep – that’s 22% grades on the Keutenberg – typical of the Amstel Gold route.

No Respect?
While it doesn’t have the cobbled history of the Belgian classics, it does have a charm all its own… one with many, many hills. Yes, folks, the Netherlands has hills! Perhaps part of the problem stems from Amstel’s name. It’s not named after a departure or arrival city, like “classics” classically are, but after its sponsor, Amstel Beer. No respect? Bear in mind that it runs 250 km, over 31 hills, and there ain’t too much flatness in the race at all. And when it is, after you’ve chugged up a short, but poisonous 15% climb, you’ve got to deal with strong cross winds in April. 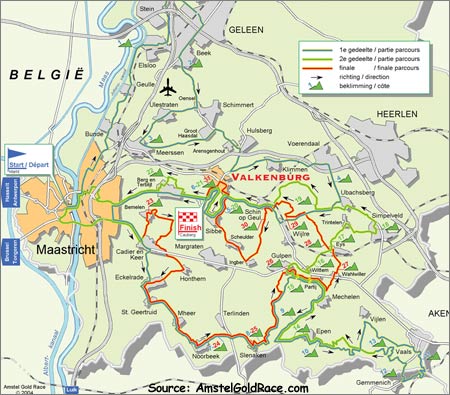 The Amstel Gold route: 250km and 31 nasty climbs – all for a mug ‘o beer. Sounds like our kinda race.

The race begins in Maastricht, the city where the European Union Treaty was signed back in 1992, a quaint city on the Maas (or Meuse in English) river. It used to end there too, when sprinters were able to win, as Erik Zabel did in 2000. Now the race ends in Valkenburg, a kind of Dutch tourist city that would rival some of the Mediterranean riverias in gaudiness had it only a beach. The World Championships ran through there in 1998 when Oskar Camenzind won the rainbow. Amstel climbs the Cauberg three times, the steep hill that ends near Valkenburg’s casino and sauna, just in case the riders want to blow their earnings afterwards or just can’t sweat enough.

After the Fromberg the narrow farm roads bring the riders ever closer to the Keutenberg and the final in Valkenburg.

This year Amstel is celebrating its 41st anniversary. So it’s young and it just happens to take place in my stomping ground, beautiful Mergelland, which is what this area is called (due to the presence of “mergel,” or marl in English, a geological formation). Officially it’s the state of Limburg and is like a peninsula that juts into Germany on the east and Belgium on the west. Many many many Dutch come here to spend their vacations, to what they call “Dutch Switzerland.” Hotels offering you the typical pannekoeken – pancakes with any imaginable topping – bear names like “Alpine View” or “Hotel Switzerland.”

The cyclist have little time to stop for an Amstel here in Valkenburg just where the Cauberg begins.

Thirty-one hills. I have ridden the French alps, even done the north side of the Glandon – the hardest French alpine pass in my opinion – and Alpe D’Huez in one swoop and while these certainly maul you, the work to get up them is steady, if someone isn’t attacking, of course. The hills of Mergelland leave you little rest. Most hit an average of 8 or 9% and many have ramps of 14 or 15%. Finding a rhythm to ride them isn’t a simple task. You stand on the pedals and look for the end. Eh, no rhythm, just full bore.

Mild compared to the others, the Fromberg is the third to last climb and where Rebellin and Boogerd broke away in 2004. It continues along the profile of the hill to the right.

From Maastricht, the riders head north and double back towards Valkenburg, then they zigzag through Mergelland. The race takes them up the finishing hill, the Cauberg three times, which lasts only 1 km, begins at about 8%, hits 12% in the middle and fades out to 5 or 6% at the end. After the first time up, the race heads back towards Maastricht, then south through some picturesque villages with unpronounceable names, like Mheer, Noorbeek, Partij, Vijlen.

The longest climb at the AGR, Camerig sports a heavily visited ice cream stand at its lowest point. The road zigzags up the hill for 2.2 km.

The longest climb, called Camerig, begins near a favorite Dutch ice cream stand, hits an average of 6 percent for just over 2 km. Then the riders touch Germany at the Drielandenpunt (Three Country Point), near the German city of Aachen which I call home. The riders dip into Belgium, go back the way they came for a good 30 km, up the short Gulperberg. The website says it’s 10%, but my trusty Ciclomaster gave me readings of 15%. Over the Cauberg again and then it’s flat for about thirty km.

Eyserbosweg is the fourth to last climb and runs along the tree lines. At the forest the road hits 14 to 15% and peaks at the antenna.

The last killer hills are waiting: eight in less than 40 km. The Eyserbosweg is only 900 meters, but it averages 11.5%, the first 600m average 8%, the last bit through the woods up to the antenna hits 15%. Then down the roller coaster to Fromberg, where Rebellin and Boogerd made their move last year, 1.6 km at 5%, rather mild, but then they head to the, for me at least, mythical Keutenberg.

Atop the Keutenberg, the sign warns descending cyclists to dismount, dangerous hill.

It isn’t long. At 1.2 km the Keutenberg has an average length for Amstel, but it’s a mother. The website says it’s only 8%, but that’s absurd. The sign at the top says 22% and warns cyclists to dismount when going down it. Ciclo gave me a reading of 20% in the middle and I *#%$§ swear the first short ramp, it’s maybe only 100m, is over 30%. That must have overloaded Ciclo’s chip. Keutenberg is to the Amstel, what the Muur or Koppenberg are to Flanders. 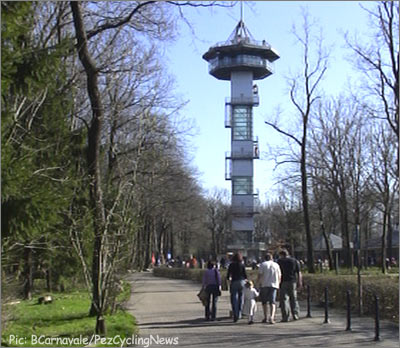 Here the cyclist hit the AGR’s highest point, 320 m above sea level, which is also the highest point in the Netherlands. Lots of great Belgian French fries here. And a labyrinth made of large hedges.

From here it’s down the coaster and once more, the third time, up the Cauberg. I watched Boogerd lose in ‘04, he attacked a little too early in the big ring. Rebellin, in the small one, kept his cool and caught him at the end, just where there’s the turn off for the sauna and casino.

While I prefer the Belgian trappist beers or a good German pilsner, here’s one to Amstel. May its race become the Prince of the Classics.

Stay tuned for our PEZ-Clusive coverage of the Amstel Gold Race this weekend, and check the website for more www.amstelgoldrace.com for more info.