Discovery Channel’s Stijn Devolder added one sweet jersey to his growing collection – the Belgian national tricolor. And he did it in style – dropping his breakaways and powering home solo – with a force that not even race fave and Belgian best-boy Tom Boonen could match. Ed Hood was there…

It’s a drag up to the line in Ronse, but not that you would notice, with the way Tom Boonen (QuickStep) is hammering that Specialized up the grade; Philippe Gilbert (Francaise des Jeux) is well beaten by the sheer power of the big man from Balen. That’s revenge for last year then, when Gilbert was second and Tom was third? 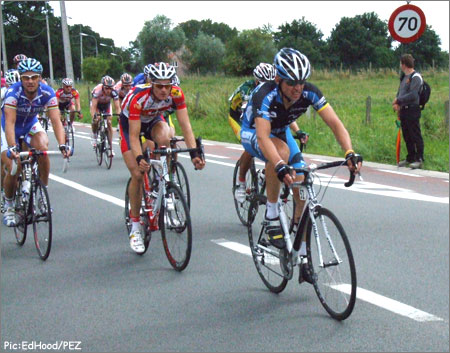 There’s just one snag – Disco rider, Stijn Devolder finished 16 seconds ago and it’s the fresh-faced ‘chrono-man’ – who took the time trial at De Panne back in April – who will pull-on that famous red, yellow and black jersey to join a roll of honour that includes Van Steenbergen, Van Looy, De Vlaeminck, Merckx and Maertens. A nice present for Trek and their new post-Lance frame design. 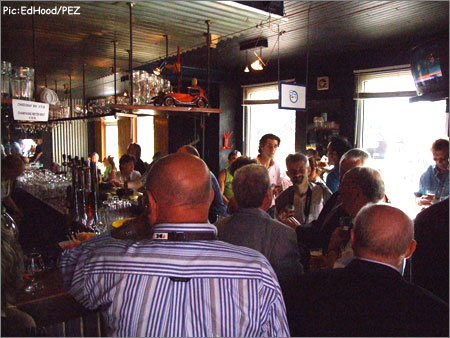 It wouldn’t be a real bike race experience without a smoky Belgian bar.

Some are saying that the trajectories of the two young Belgian contemporaries, Boonen and Devolder, have crossed; as Boonen sky-rocketed to the top, Devolder’s career-path graph has been less spectacular, but it’s steadily creeping-up to Boonen’s level – have the lines crossed? The next couple of seasons will tell us. 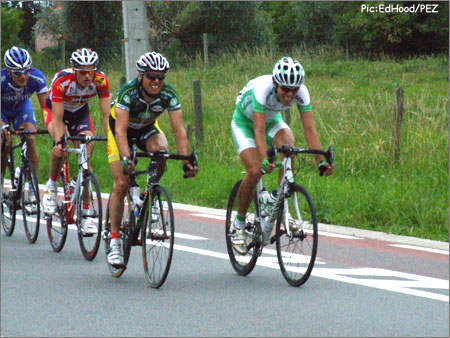 Whilst the suffering was long and drawn out for the racers… 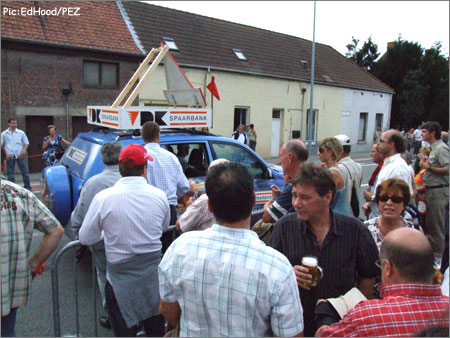 There was much waiting and drinking for the spectators… 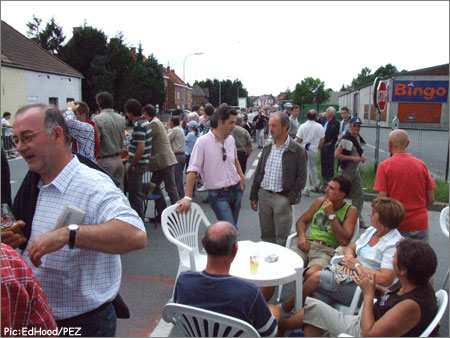 …and more waiting and drinking… 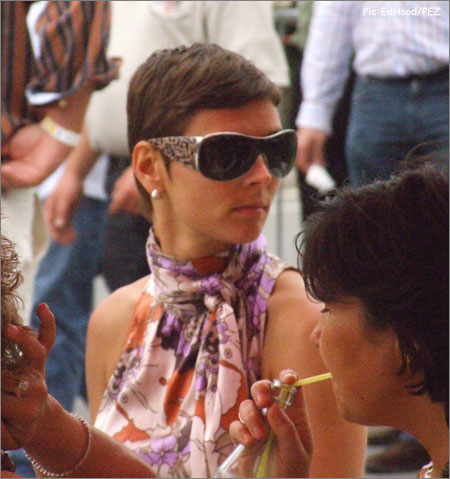 …and viewing of other members of the crowd.

This was no lucky win, Devolder attacked on the last of the 16 ascents of the circuit’s prime obstacle, when no one else could follow, then built his winning-gap over the last ten kilometres. Gilbert tried to respond, but there was just too much lactic acid in his legs. Boonen had his chance too, with two laps to go, a huge jump took him up to a group of four – two Cofidis and two Predictors, but we were then treated to the shock sight of Tom ‘blowing’ on the climb and going backwards to the chasers. He had already used up a large amount of QuickStep horsepower to get the big, early Predictor-dominated break, back. 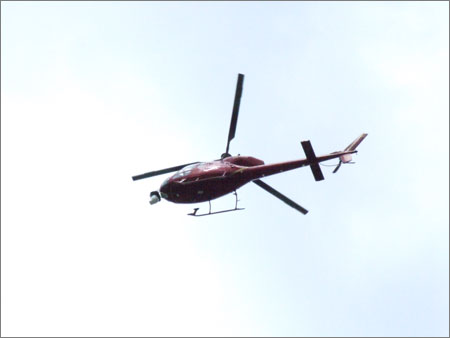 And now his men had to chase, when they should have been blocking. Unlike Boonen, Devolder didn’t have the benefit of a strong team, he had just Gianni Meersman and Jurgen Van Goolen to support him, whilst Tomeke had a dozen, including big hitters like Peter Van Petegem, Gert Steegmans and Kevin Hulsmans.

At least QuickStep made the podium; Predictor/Lotto – despite having four riders in the early break which defined the race from lap two to 13 of the 16 – came away with nothing. Their VIP entertainment was the best though, and their guests had probably drunk so much champagne they didn’t notice the disastrous result.

The six hour, 245 kilometre race was conducted in sunny but very blowy conditions. Before the start we asked T-Mobile DS, Alan Peiper, there for Axel Merckx, – champion in 2000, but riding his final Belgian championship before retirement – who his favourite for the day was; “Gilbert – if he uses his f**king head and doesn’t ride like an amateur!” 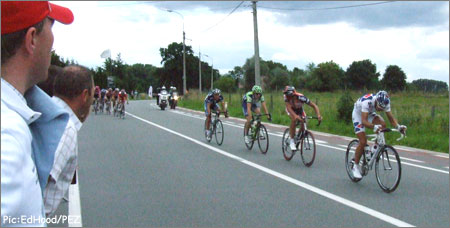 We spotted big Bert Roesems; “What’s the Predictor game-plan today, Bert?” His answer was simple; “To win the title!” Not today, Bert. But Bert put in a good shift at the coal face, 11 laps in the break; much more than his team leader, Leif Hoste who did little to justify his “five star favourite” tag in the press. 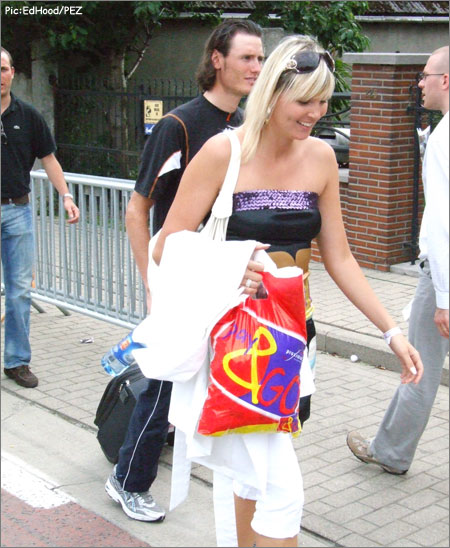 Ok, so this is after the race, but Johan Van Summeren’s girlfriend makes a fine interlude. 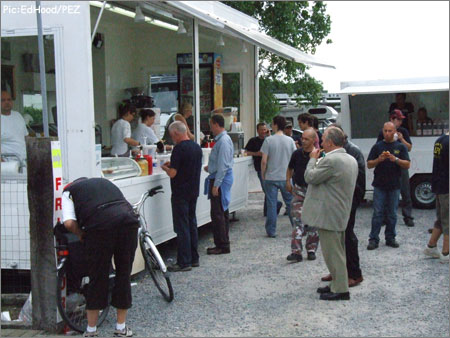 Grab some frites too before we get back to business.

The early break, with its four Predictors wasn’t given much slack initially by QuickStep, despite the presence of two of their number – Seeldraeyers and Hulsmans – in the escape. However, on lap four the gap yawned-open to 3-40 before reaching a maximum 5-10 on lap five. Lap six saw QuickStep ‘blink’ and the poker game entered the next phase as the men in blue, whose real job is to sell laminated flooring, picked up the oars. 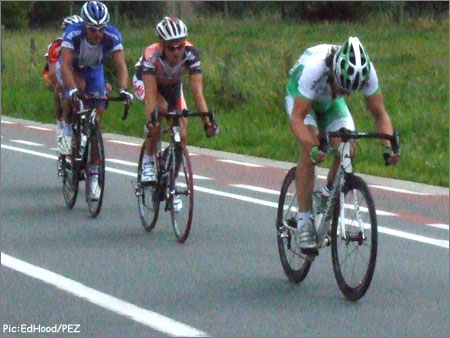 A later move with big Gert Steegmans in it, along with Van Hecke, Keisse, and Thijs.

Lap after lap the sight of a perfect QuickStep echelon was beautiful to watch, but not good for Tom’s chances, although DFL (!) did help out on laps ten and eleven. It was lap 13 when the break succumbed to the QuickSteps – a seven lap chase isn’t best preparation for a big finale from the team leader, however. 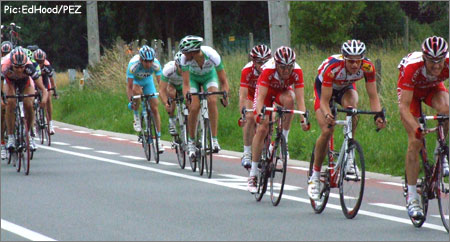 Lap 14 saw six-day star, Iljo Keisse (one of 24 Chocolade Jacques riders in the field), Preben Van Hecke (Predictor), Erwin Thijs (Unibet) and the inevitable Quickstep – Gert Steegmans, go clear. It was a well-drilled Landbouwkrediet chase which nullified this move. Boonen’s jump across to the four escapees looked like it would be decisive but our jaws dropped as his shoulders rocked and daylight appeared in front of him. 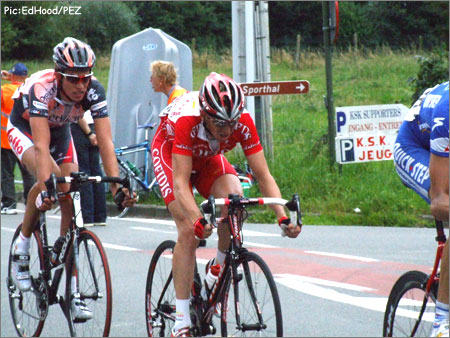 The race situation remained very fluid coming into the last lap-and-a-half with Cofidis very active through Nuyens, Verbrugge and Staf Scherlinckx – Predictor and Unibet were well in the mix too. On the last climb though, it was Devolder who asked the big question and no one else could answer. All that the exhausted QuickStep boys could do was to help salvage silver for the boss. Maybe Specialized shouldn’t have told the press before the race that they had sprayed-up a Belgian champions liveried frame for Tom?