“I had started conservatively, and early-on I was 10 seconds down, but by the time it happened, with 12 miles to go, I was 25 seconds up; so in my mind I’d pulled-back 35 seconds. I was feeling good and thinking; “I’m going to beat David Millar today!”

The words of Scotsman, Jason Macintyre, the “it” was the front, 19mm Continental Olimpic track tubular on his Cervelo, exploding with 12 miles to go in Sunday’s British time trial championship, over 27 miles (43 kilometres) at Holmes Chapel in Cheshire, England.

Some people have said that riding a super-light track tyre in the rain on a technical course wasn’t the best idea. But it was part of Macintyre’s ‘all or nothing’ strategy and I didn’t have the heart to take him to task over it. 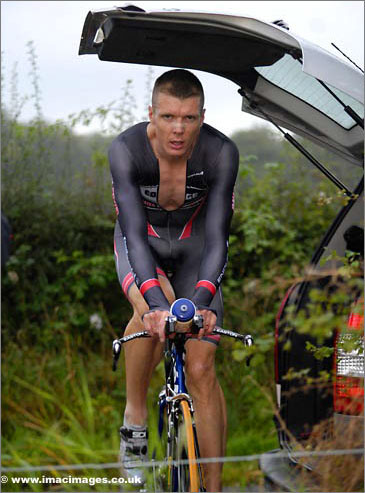 PEZ: Dumb question, but how do you feel?

Jason: I’m devastated, I didn’t sleep for 35 hours after it, I just couldn’t get it out of my mind. I had prepared for months and for it to disappear like that was hard to take. I’m trying to be positive about it though, and focus on the fact that I have great form. I’m making another attempt on the British 10 mile time trial record on the Levens course in Cumbria, in a fortnight, so I’m trying to keep that at the front of my mind.

PEZ: You had prepared meticulously for this one Jason, hadn’t you?

Jason: I had prepared for it since the British 25 mile time trial in June. You’ve heard those stories about Robert Millar sitting in a room with a blanket over his legs, doing nothing but train, eat and sleep? That was me, I was viewing it as the race of my life. I figured that whilst David Millar is obviously a huge talent, to him it’s just another ‘day at the office’ but for me it was the most important race I was ever going to ride. I won the ’25’ champs but I was still tweaking the bike, saddle position and stuff. Since then I’ve got it perfect and my training was 100% focused on Sunday; behind the motor bike, weights, intervals – the works, I gave the race respect.

PEZ: Your preparation extended to getting down to England early, didn’t it?

Jason: It’s 500 miles from Fort William to Cheshire, you can’t just drive down the day before, can you? I was down there four days before the race and rode the course six times, I practiced every corner so I knew the whole course off by heart. 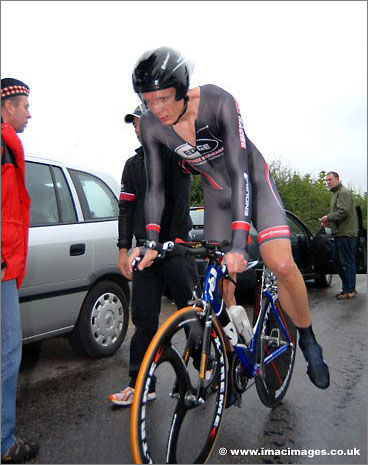 PEZ: In your mind, you had it won?

Jason: Look, the man is one of the best testers on the planet and I’m not saying that I’m at his level, but I figured that with it being, “just another race” for him and the biggest day of my life for me, that would make the difference. He had ridden the Eneco Tour the week before and a nocturne (evening race) the night before in Wales. He wasn’t on his own bike either, but having said that, he was on one of the British Cycling “Stealth” bikes – I’ve heard that they are amazing, they cost tens of thousands to develop. The time checks were telling me a story; they were confirming that my plan to finish very strongly was working. It wasn’t as if it was one isolated check, I was getting checks from my helpers and from photographers and spectators on the course. They were all telling me more-or-less the same thing, that I was 20 to 25 seconds up and the gap was growing.

PEZ: There are stories doing the rounds that you fell, and that’s what caused the puncture?

Jason: That’s not the case, I punctured on a right hander on what was probably the steepest descent on the course, there was a left hande at the bottom, but rather than try and get round on the rim, I just ran wide to the opposite kerb. But I’m 100% intact, I can assure you. 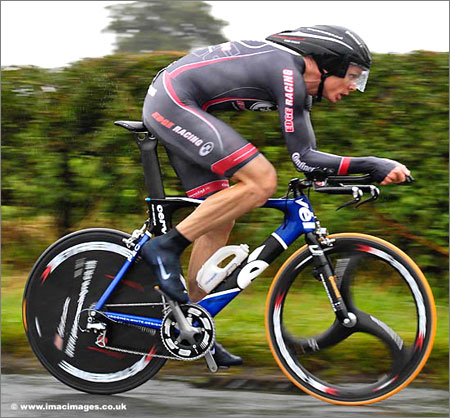 PEz: There was no chance of a wheel change?

Jason: No, there was just no one around, so I began to walk along the course, ironically, my helpers weren’t far away. When I came into view, I was only half-a-minute down on Millar, but I was on foot! I could have changed the wheel and got the silver, but I was there to win. I hoped to just slip away from the strip at the finish, without a fuss, but folks were coming up to me and saying; “you were up on him!”

PEZ: Have you heard anytjing from British Cycling? Is a Worlds ride on the cards?

Jason: Not a thing. It’s hard to know what to do, should I phone them and say that I’d like to go? I know I’m not on the World Class Performance Plan and they have Wiggins and Millar, but it’s like I said, it’s just another race for them. If I went, I would be like a kid in a toyshop, I’d give my all. I’m also at a stage where I could do with advice, I’d like to know where to take it from here, get some fresh ideas. Maybe with the Worlds, it’s difficult with Wiggins and Millar. But for the Olympics, Millar can’t ride, Wiggins will be concentrating on the track and it’s not as if I’ll be ancient next year.

Let’s hope, for Jason’s sake, that the guys at Brirish Cycling are Daily Distraction fans and maybe have a wee look at this.

CERVELO SOLOIST: We Have A WINNER!