As PEZ hung-over the crowd control barriers in famous Glasgow Green on Saturday, congratulating our Tour of Ireland diarist, Evan Oliphant (DFL) on being best British rider in this year’s Tour of Britain, we spotted our man, James McCallum…and had one last chat.

James hasn’t enjoyed the best of luck in the race this year, but he’s been taking time every couple of days to keep us abreast of what has been a very competitive and fast race. The only problem was – the Plowman Craven pro was in his ‘civilian’ clothes, what happened, James? 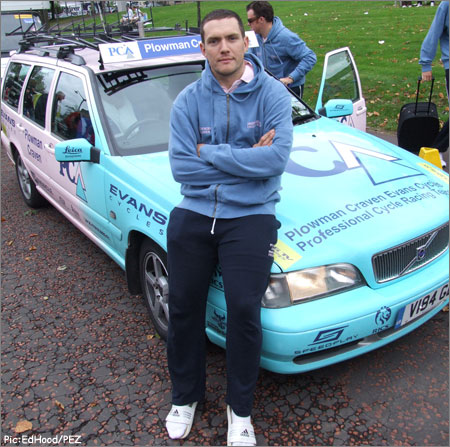 Mr. McCallum called it a day in the first feed zone, but it was still a good week for himself and the team.

“I didn’t have the head for it today; I climbed-off at the feed. I tried a dig at the start to get away, but it’s been so fast, the race has just been out of control. With lesser-known teams and less riders per team, no one has been able to impose themselves upon the race. I’m a bit disappointed, but at the same time, happy to have got as far as I did, with coming back from injury. I had a good day yesterday, too – I was just floating up the climbs with the idea in mind of doing something today. It’s also in my mind that I have a round of the British criterium series tomorrow at Warwick, and a lot of driving to do first.” 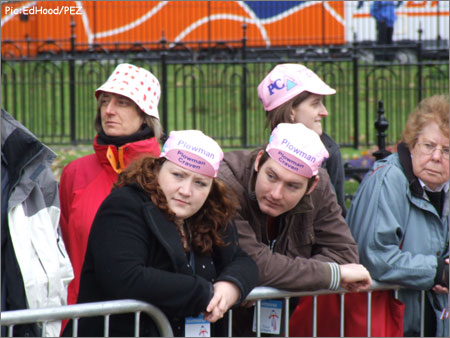 The fans were out in droves to see the finale.

The big crowd had just watched twice world team pursuit champion, Paul Manning – who is on the Belgian Landbouwkrediet team – but was riding here for Great Britain, distance his breakaway companions to take a fine stage win. The overall win had gone to the man who set the tongues-wagging in the early sprint stages of this year’s Tour de France – Frenchman, Romain Feillu of Agritubel. 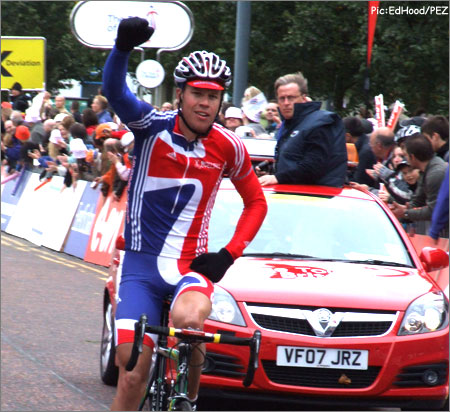 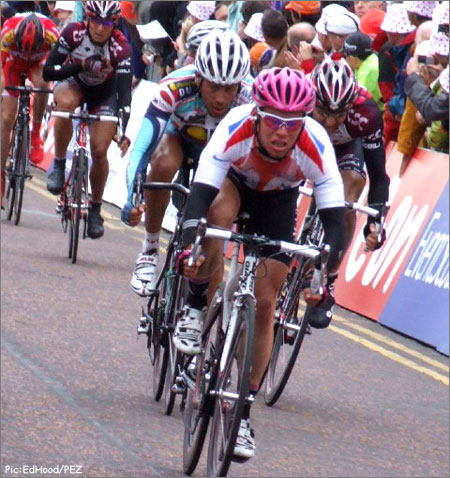 Cav led the bunch home in behind the break.

Feillu grabbed two fifths and a ninth in July, up-against the real big boys, grabbing some excellent publicity for his Pro Continental Agritubel team, who many complained shouldn’t be in the Tour. The 23-year-old Feillu is definitely on the ‘up’ with wins in the Circuit de l’Aulne and a stage of the Tour de Luxembourg this year. 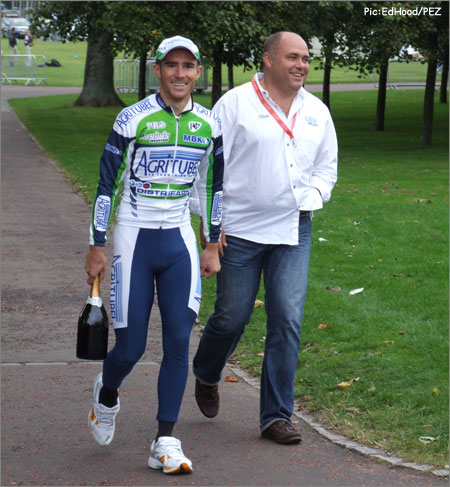 Nothing like capping off a good week of racing with an overall win and some champagne.

Leading at the start of the last stage, on Saturday morning, was Spaniard, Adrian Palomares Villaplana of Pro Continental squad, Fuerteventura Canarias. Agritubel may not be in the ProTour, but they have competed with the biggest teams for several seasons and know all the tricks. 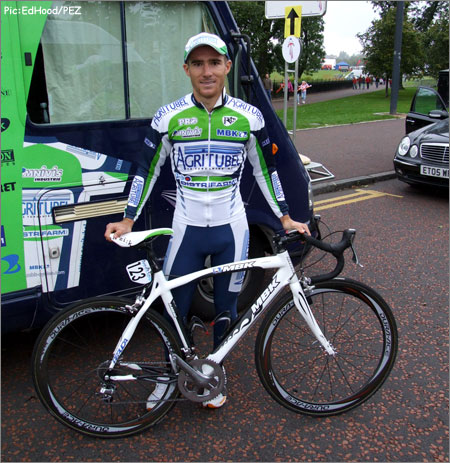 Feillu has made quite a name for himself this Summer.

Feillu took a time bonus early in the day to go ‘square’ on time with the Spaniard, Agritubel management knew that in the event of a ‘tie’ then it would be decided on ‘count-back’ to prologue times, where Feillu was 16th and Villaplana 61st. The Frenchmen then let a break of lowly-placed riders (from which Manning would win) go, so that all further time bonuses on the stage would be spoken for. 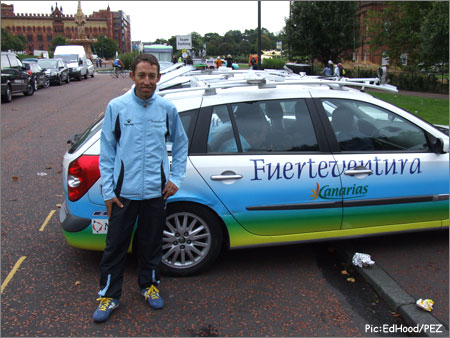 It’s been a great past month for Villaplana.

Pez decided to track-down the beaten Spaniard and hear what he had to say. Far from being ‘unknown’, as some of the media would have it, the 31 year-old from Valencia has been a pro since 2000, he spent five years with the Portuguese Boavista squad and then had two years with Spanish squad Kaiku before joining Fuerteventura.

Despite being around bike racing practically all my life, I still get suckered, I said to the big, strapping, handsome guy in the team car; “excuse me, but was it yourself who just took second overall?” The male model pointed to the smiling, tiny guy, who looked like he needed to ‘go large’ on a double Big Mac with fries. There was a language barrier, Adriano doesn’t speak English and I don’t speak Spanish (some might say, ‘or English’) but I enlisted one of his team mates, who translated for us, in between demolishing a huge sandwich.

PEZ: You must be disappointed to lose the race on the last stage?

Adrian: No, not really, we knew it would be hard to keep the jersey today, with the fact that there were those bonifications (time bonuses) on offer. I’m just proud to have won a stage and carried the leader’s jersey in such a good race.

PEZ: Is this your best performance?

Adrian: Not yet, I’m still open to all offers! 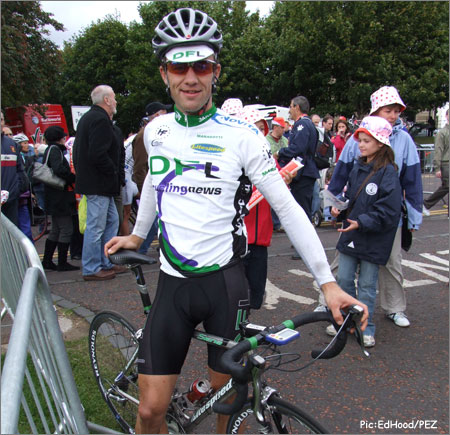 Our man from the Tour of Ireland, Evan Oliphant, was all smiles on the last day.

PEZ: Do you guys have to go all the way back to the Canaries?

Adrian: The team is sponsored by Fuerteventura, but it’s based in Valencia, where I live, so it’s not quite so far.

PEZ: Where are you going to use the rest of this good form?

Adrian: We have a stage race in Mexico, next and my last race of the year will be the Escalada in Barcelona in October.

PEZ: Congratulations on a great ride and safe journey, guys. 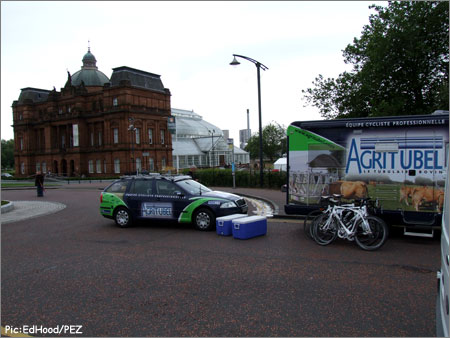 It’s just a hop over the Channel for the Agritubel boys.

The team vehicles were all parked beside Glasgow Green, a historic park in the city centre. Next to the parking lot was the People’s Palace – a museum to the ordinary people of Glasgow and their lives through the centuries. Just beyond was the Templeton carpet factory, brick-built in the 30’s in Moorish style, great back-drops for pictures of Fuerteventura and Agritubel team cars, far from home.

The Agritubel boys were waiting patiently – and having a sing-song – in their camper van for the winner to appear back from the ‘control’, he appeared with a grin to brighten the greyness of a dreich (It’s Scots, it means dull or dreary) afternoon and a huge bottle of champagne. I couldn’t get anyone to translate, I think they were all too-anxious to attack that champers, but I did get some good pictures.

I hope you enjoyed James and PEZ taking you to the Tour of Britain, a race which showed that you don’t necessarily need the big stars to have the best racing.