It’s day 2 of the Three Days of De Panne – and PEZ is back – hangover-free and enjoying the sunny Belgian Spring. Going in to Stage 2, Paolini has the jersey, Ballan is at four seconds, there are five at around quarter-of-minute, including Bert Roosems, then 11 at around a minute-and-half, the main bunch is at two-and-half minutes but there are other big groups that lost six and 14 minutes.

– Catch the action live on Cycling.tv – 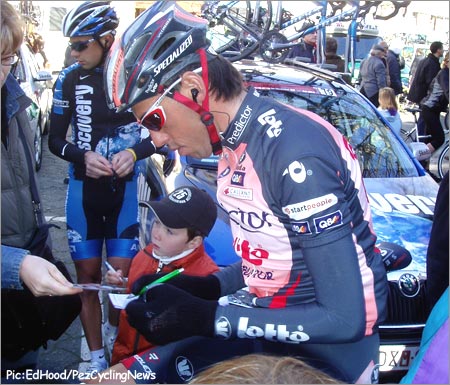 Bert Roesems is a huge fan fave in these parts – and Sunday we’ll be chasing him at Flanders with his father-in-law as our driver!

Depending on what happens today, it looks like the winner will come from the first seven; Paolini and Roesems must fancy their chances in the closing chrono. We’ve got a full tank of gas, the sun’s out and there’s no hang-overs: let’s go! 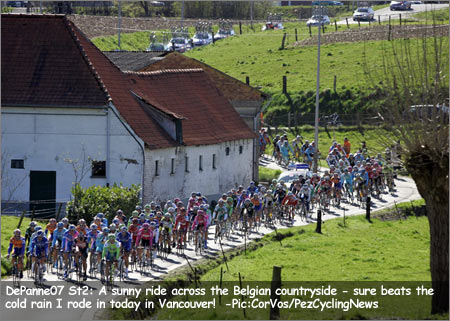 De Panne stage 2 Parcours: It’s a beautiful spring day, there are no clouds but it’s windy and on the chilly side. The race starts in Zottegem and heads immediately for the Oudenaarde ridges where there are three categorised climbs including the Eikenberg. But the climbs are all over within an hour or so, then it’s the cross winds back to the coast and two laps of a pan flat 13 kilometre finishing circuit where the speed will be off the Richter scale. 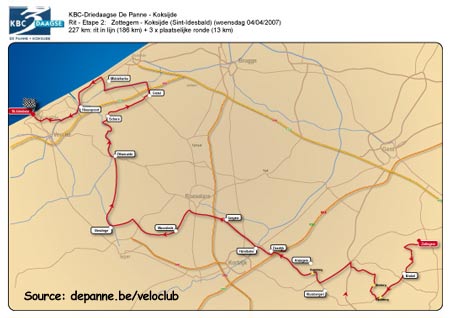 All told, the 227km makes a Classic distance.

The Race: We’re on the Eikenberg, the sun is out, but the wind is howling through the trees, it’s gonna be hard on those polders. The Eikenberg is a long climb, cobbled most of the way but it’s a head wind so that should slow the beasts at the front down, a little. 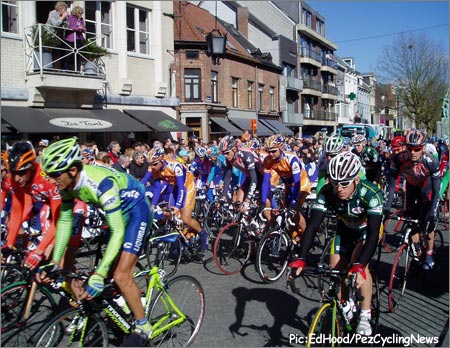 • 12 Noon, one hour in and Boonen leads over, chatting and smiling, there aren’t a lot of laughs behind but it’s all together with Rambo, (on a new bike) stone last. The speed of the race and route makes it very difficult to see it on more than a couple of occasions so it’s TV monitor coverage for the finale. 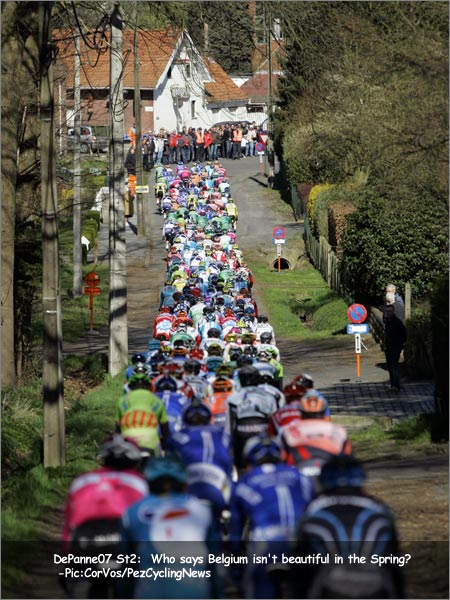 Yesterday the TV was in a guy’s garage on Berendries, the goggle box sits among the junk in the garage whilst the enterprising householder sells spectators pils and gin. Today, I’ll be doing my coverage from the Cafe Mexico in Sint Kruis, by some strange coincidence, there’s an amateur kermesse taking place outside, just a little one – 190-odd starters, a pan flat course, 19 laps of a six kilometre circuit.

It’s all a blur on the Eikenberg.

Meanwhile, back at De Panne, there are 75 K to go and two riders – Jarno Van Mingeroet (Jartazi) and Uzbeki champion and 2003 world espoir champion, Sergei Lagutin (Navigators) are 13 minutes clear, Lampre and Liquigas are doing the work at the front for Ballan and Paolini respectively. The chasers aren’t panicking – yet, and the lead is steadily decreasing, 12 minutes at 65 km. At 60 K someone has been doing the sums and Lampre turn-up the wick a little.

The bunch is on the coast road at 55km to go with endless holiday apartments and the North Sea on their right and the coast tram’s tracks on their left; the gap is still 10-24. 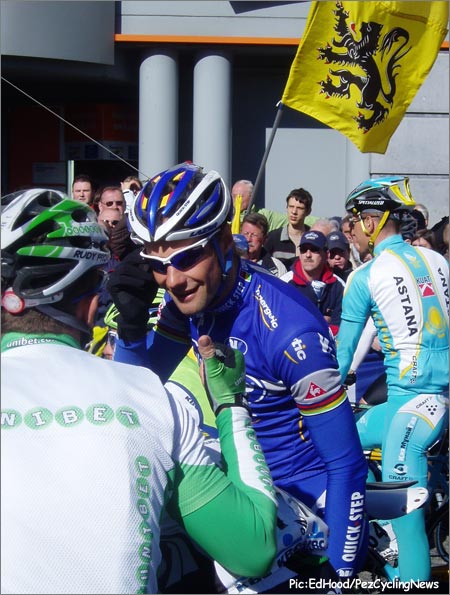 At 50km the bunch is a long, long line as Liquigas and Lampre stoke the fire, the convicts are still 9-41 to the good. Irrespective of the final result today, it’s been great publicity for Navigators and Jartazi as the two slog-away and hog that expensive TV time. [Pez Sez: I had the pleasure of riding with Lagutin last summer while the team was in Vancouver for BC Super Week – very nice guy!] 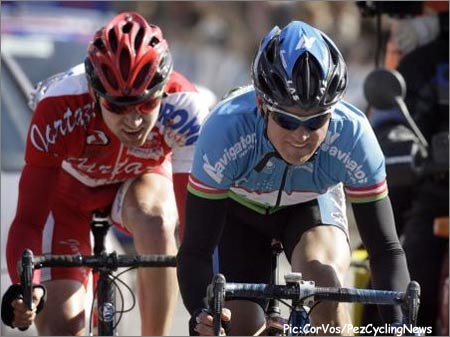 Navigator’s Lagutin and Jartazi’s Mingeroet worked like dogs to score some great tv coverage for the sponsors.

Into the last hour now and panic has set-in behind, with 40 to go it’s on eight minutes – they could just do it. At 35 K the only rider in the world who gets-away with a beard – Fabio Baldato (Lampre) swings-off after his spell and it’s still over seven minites of a gap.

At 30km it’s still over six minutes but Unibet have shortened the odds by aiding the chase – Casper or Cooke must be feeling frisky. That’s 25km and it’s on the finishing circuits, the gap is 5-16 and the bunch is desperate.

At 20 to go, Van Mingeroet is on his knees with the gap at over four minutes, Weisenhof join the chase, Pollack must be feeling good too. There’s the 15 K mark, 2-31; it’s over, as Weisenhof do the full TTT routine with the whole team up-front. The gap is 1-24 at 10 to go, the bunch know they have them but don’t want to catch them too early or the late attacks will fire-off.

They are in sight now with seven to go and none other than Tom Boonen puts in a huge spell. The end comes inside three kilometres as Boonen piles it on with big Gert Steegmans on his wheel. Is it pay-back for that awesome Kuurne lead-out or just a leg-stretch for Sunday?

Brown is hovering, Rambo is there and starts it, but Bennati (Lampre) goes from well-out and makes it look simple. Brown is second, Disco-man Vaitkus is third. Paolini still wears the white leader’s jersey from Ballan, looks like it’s all down to the time test tomorrow afternoon.

Oh yeah, the amateur race outside my cafe? Werner Vandromme won it. 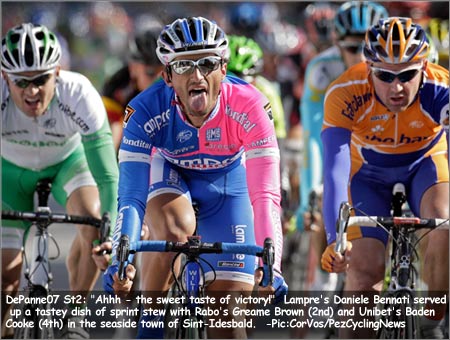 Quotes of the day: 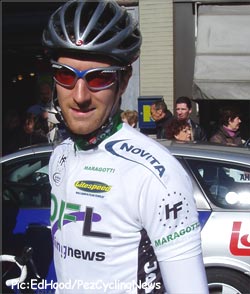 • Daniel Lloyd (DFL), finished in the big group on Monday at around 2-30 and we caught up with him at the Zottegem start. “I’m going well-enough and can stay with the big splits but when it comes down the final selections, I’m not quite there yet. It was Bert Roesems who did a lot of the damage yesterday, he just split it to pieces.” And how does he see today going? “Nico (team mate, Mattan) says that a small group will try to get away before the hills. He reckons that it won’t be too savage with echelons out to the coast but when it hits the finishing circuits it will explode.” 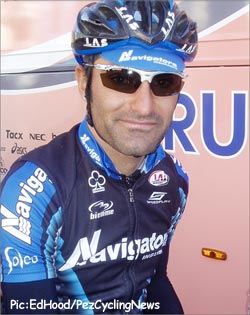 • Navigator, Kristian House had a minute for us too, the last time we met he had just won the Girvan three-day amateur stage race in Scotland – changed days. “I missed the split yesterday, I was comfortable-enough on the Berendries the first two times but on the cobbles coming into the climb for the last time, a guy in front of me let a gap open and that was that; I finished in the group that was six minutes down.” And today? “It’s going to be very windy, the climbs won’t play much part, they are too far from the finish. Maintaining a good position coming in to the finale will be crucial today. The finishing circuits will be very fast but even before that, when it hits the little roads at Dijksmude it will go wild.”