Thursday’s morning stage was short and furious, and on the line it was a Quick.Step sprinter/hard-man taking top honors, and his name is not Tom Boonen. Indeed, it was his leadout man and future star, Gert Steegmans coming through to take the stage by the proverbial mile.

It’s a split stage today, the riders and mechanics love those – double the fun.

But at least the sun is shining and if you miss the cut for the time trial – only the first 120 on GC start – you can go home!

De Panne is a great race for bike fans, the riders stay in the small seaside hotels and the mechanics set-up in the hotel garages or in the street, if the sun is out. Autographs and those posed pics with your favourite star are easy to organise. Paolini still leads by nine seconds from Ballan, Matveyev is third on 18 sec; Poosthuma fourth at 20 second and Roesems is fifth at 21 seconds. It’s a 9.05 am start so let’s get down to the square. 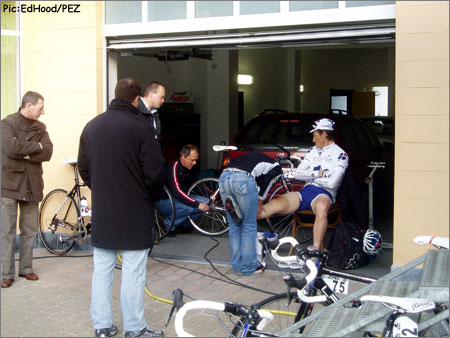 The hotel garage works perfectly for a pre-race rub.

Stage 3 – Parcours
Today is a smaller version of yesterday, a flat, fast thrash to the bergs, three classified climbs then a return blast to the coast and a nine kilometre finishing circuit. Total distance is 119 K and it should end in a sprint. There’s not much wind this morning, so those nasty echelons shouldn’t form, it’s cold but the sun is out.

Say it with flowers.

Stage 3 – The Race
At 9.05 on the dot, the big bunch rattles-off over the cobbles. There’s not a lot of time to catch the race on the road, so we opt to watch the start then catch it on the finishing circuit. The mechanics who aren’t in the team cars are busy prepping the chrono bikes, some are familiar, like the Disco Treks, I was all over them like a rash at the Tour last year. 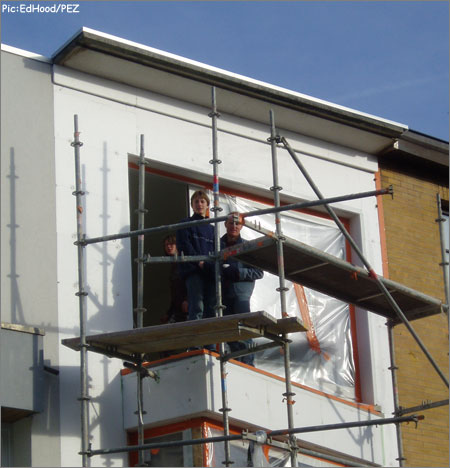 These builders got a great view of the race today.

But some are so fresh they still have the labels on, like the, shiny new Litespeed low-pros at the DFL hotel. A couple of minutes ahead of schedule, the bunch flashes through the finish, a clutch of riders are just off the front, but it won’t last; it’s virtually certain to be a bunch sprint – Baden Cooke likes this finish, maybe I should have wagered a few euros on him? 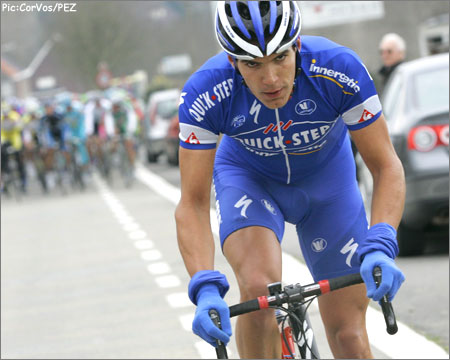 Gert Steegmans got the chance to sprint for himself today and he didn’t disappoint.

“No!” is the answer to that as big QuickStepper, Gert Steegmans takes it by a cobbled street from green-jerseyed Bennati; the maillot vert really belongs to Paolini, but he’s in the white of race leader. Just to show he’s on the ball, Luca takes eigth. Acqua Sapone’s, Gabriele Balducci takes third. 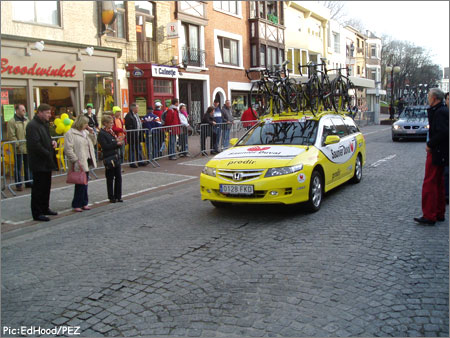 How bumpy are the cobbles in a team car?

It’s all down to those 11 K up and down the sea front now. Last time I was here, Laszlo Bodrogi won the test thanks to a tram running alongside him through the worst of the cross wind; I wonder if the DS’s will be studying the time tables? 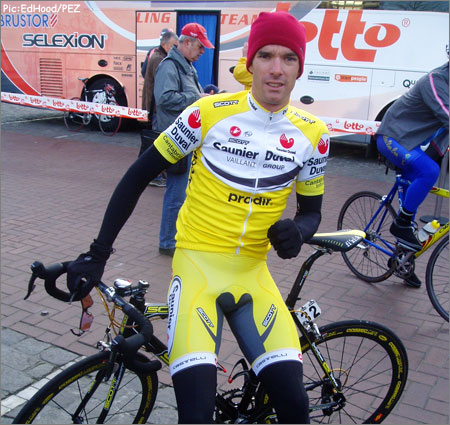 David Millar is trying his hand in Belgium this week.

Interviews Of The Day
The re-born David Millar was very active in the chase over the cobbles on stage one: “Yes, I’m feeling good but we let that group slip-away on Tuesday. I’m feeling like a junior here, it’s more like being a cycling fan, a voyage of discovery – I’m really enjoying it. I always enjoy racing in Belgium, the people are great with me. Next-up after this is Flanders, which I’m very serious about and then the Tour of Georgia.” And the plan for today? “Keep out of trouble in the morning and win the time trial in the afternoon!” 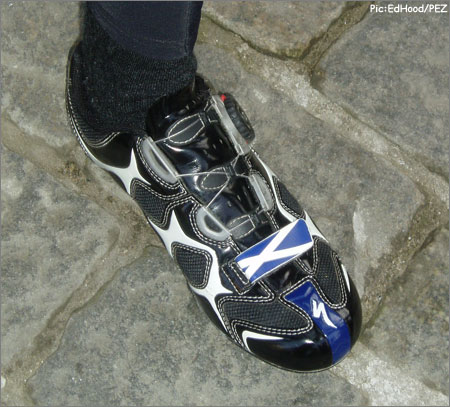 Navigator’s Ciaran Power was looking forward to defending Sergey Lagutin’s lead in the ‘Rushes’ (intermediate sprints) competition, which he grabbed after his long break with Jarno Van Mingeroet on stage two. “I had bad luck on stage one, I dropped my chain and finished with the group at 14 minutes. Yesterday was OK, we had Sergey up the road and I finished in the main bunch. Today the game plan is simply to help Sergey keep the jersey.” 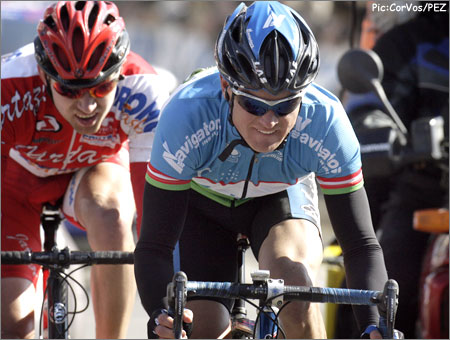 Sergey Lagutin’s escape in Stage 2 netted him the intermediate sprint jersey, and the Navigators successfully defended the lead in Stage 3.

And has Ciaran made the cut for the time trial? “Yes, I’m afraid so, but I’ve got a new tt bike which it will be good to try-out.” And Ciaran’s choice for Flanders? “Boonen – he’s such an animal, isn’t he?”

Quote of the day, however goes to T-Mobile’s, Roger Hammond, when asked how the stages had gone for him so far, he summed-up De Panne in three words; “windy, long, hard!”