Long arms stretching to the skies, 34 year-old Erwin Vervecken of Belgium gave 20,000 rabid home fans what they had come to Hooglede in West Flanders for, with his third World Elite Cyclo-Cross championship title and right behind him, arguably the biggest surprise in Cyclocross history.

It took all the strength and guile of the big man from Herentals to ensure he’ll still be picking-up those 5,000 euros per race start money cheques for another season as he held-on tight to those rainbow hoops in windy but dry conditions.

(He did train as an accountant, after all!)

The man who pushed him all the way to the line was one who the pundits (including your scribe) would only have predicted an honourable top ten placing for – Jonathan Page of the United States. 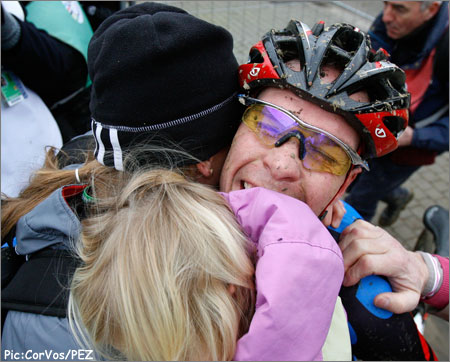 Page gets the big hug from his wife, Cori.

In a world where superlatives are routinely bandied, I choose my words carefully – his ride was brilliant, courageous and perhaps the biggest surprise ever in the history of the sport.

With junior and ladies medals under their belt this weekend, the US has arrived as a world-force in cyclo-cross,

But what of “Super Sven” Nys? 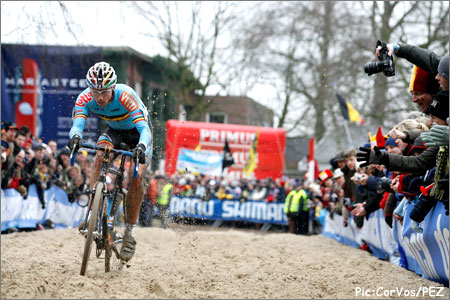 Definitely to be fair to Nys, he suffered more bad luck than anyone should be allowed in one race, but he gave up.

Yet again amazing consistency was no match for “big ride temperament” and he finished some two minutes off the pace. In fairness to the man who dominates on every day of the cyclo-cross year except this one, he had been on the ground three times before the end of the fourth lap. The worst of his three falls came on lap two when he and Wellens collided with a crowd control barrier which appeared to have been pushed out of place by a camera vehicle. The second wreck followed after a Vervecken slide – Nys didn’t fare so well though, as he went down again. Soon after that, Nys was on the ground AGAIN, this time going over his handlebars, and that’s when you start to think, well hell, today just isn’t my day. 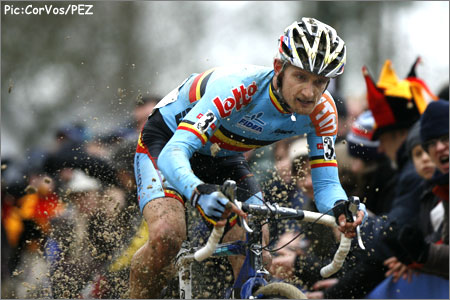 There was no such giving in from Wellens, who raged and raged and nearly got on the podium in the end.

The contrasts between Nys and the terrier-like Wellens were clear as the race progressed however; whilst the demotivated Nijs who rode the remaining laps was a shadow of his usual all-conquering “cannibal” self; Wellens fought every centimetre of the way to finish fourth – no medals for the Vorselaar man, but huge respect from all who witnessed his epic battle. To give Nys some credit though, Wellens did only have the one ground touching episode to deal with compared to Nys’ three. 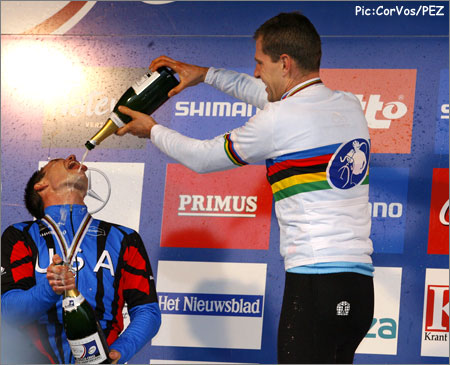 That champagne never tasted so good!

The man of the day though, was Page; always a capable performer and a regular top-ten finisher at the highest level, today he will have sent the trade team managers scurrying to obtain his cell phone number. The American was with the leaders from the start then kicked his Cervelo hard through the sand on lap six to open the gap that marked the beginning of the decisive phase of the race. 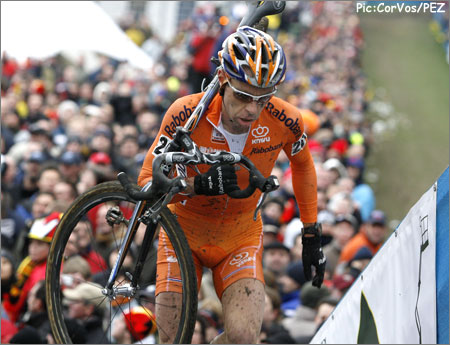 Prior to the commencement of Page’s epic, the move of the day had come from 2000 World Champion, Richard Groenendaal who had attacked to a clear lead on lap four. The Dutchman’s progress was looking very promising until a fall on lap six rubbed-out his advantage and Page took the initiative. 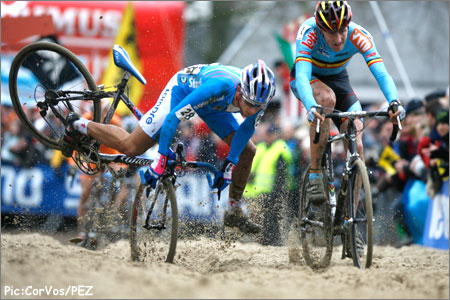 Enrico Franzoi was in with a chance at contesting the win until he took a face full of sand with two to go.

Through lap seven, Page poured it on, flawless in his riding and handling the two flights of steps which had to be climbed each lap, with great style. The little Italian, Enrico Franzoi was keeping in-touch with the rampant American but even more menacing was the big figure of Vervecken and when Franzoi stumbled, Vervecken was up and past him. 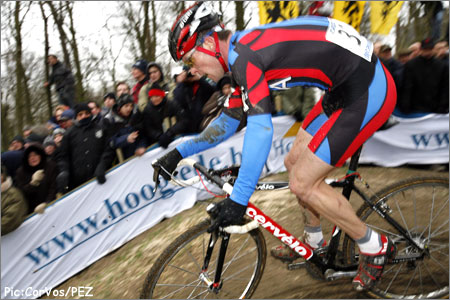 Page was incredible in every aspect today, but his driving skills were unmatched.

On lap eight the reigning World Champion caught his man, but Page, far from being over-awed or content to ride for silver, attacked the Belgian through this lap and into the bell lap.

As the two caught lapped riders, it was Vervecken who grabbed the best line and attacked, it looked like it was the coup de grace, but not only did Page reply, he went again, seeking to avoid the sprint he knew he must lose to the man who is master of remaining calm and finding form on the big day. 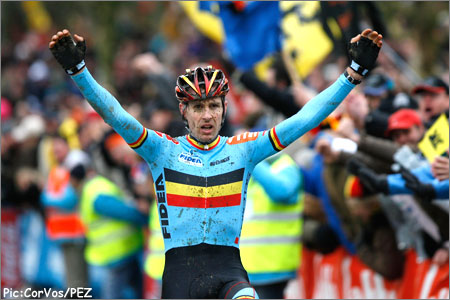 It looked like Vervecken and Page would be sprinting for the win, but Vervecken JUST managed to eke out a lead through the final turn.

In to the last turn it was Vervecken who found the front for the tarmac finish straight and Page knew it was over. Vervecken was taking no chances however and interrupted his victory salutes with frequent glances back to ensure that the American was out of the picture. 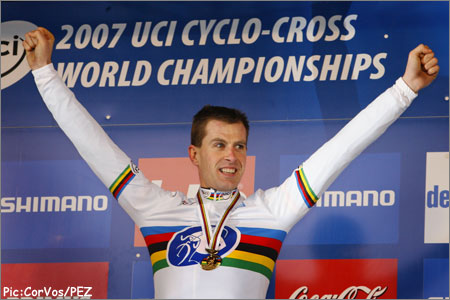 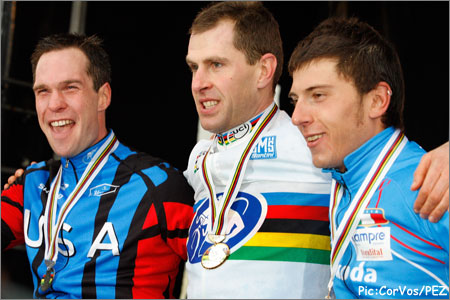 Vervecken takes his third World title and second in succession, followed by the incredible Jonathan Page, and the happy Italian, Enrico Franzoi.

Franzoi hung-on for bronze and could hardly have been happier if he had won the race, as the courageous Wellens just failed to catch him. A truly great race, now it just remains to see how we can prevent the Belgian fans from booing the Dutch riders whenever they go the front!